If there is one road in Quito that is loaded with history, mystery and mysticism, it´s the Camino de Orellana, Orellana´s road, a narrow cobblestone street that flows into the Camino de los Conquistadores. These roads bear these names in memory of the Spanish conquistadors Gonzalo Pizarro and Francisco de Orellana who travelled down this route headed east towards the fabled Country of Cinnamon. Instead, they discovered the Amazon River. In fact, this short cobblestone road was the starting point of the most renowned expedition in Ecuador´s history.

According to legend, the meaning of the name Guápulo is related to a sacred place. The tale is that in 1696 the Virgin Mary appeared in this place. According to the people who saw her, as the story was later handed down from one generation to the next, the image of the Virgin seemed to be reclining on a cloud, between two hills and above the hollow of Guápulo, pointing towards the lower lands or sun valleys of Tumbaco, Cumbayá and Yaruquí. 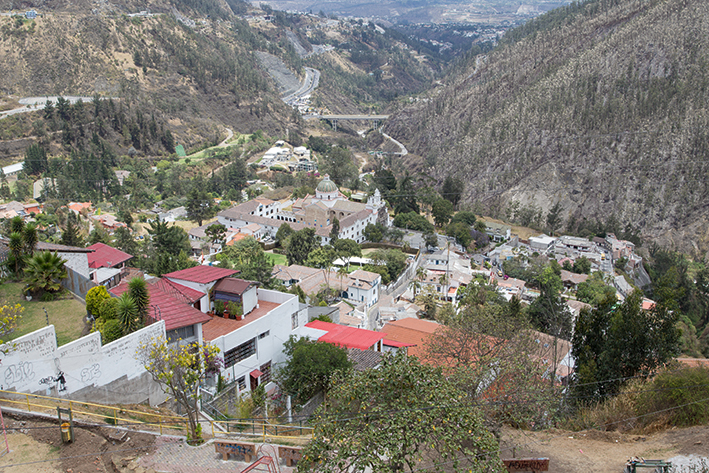 The houses in Guápulo are quite particular and most enjoy spectacular views. By and large, residents have some relationship with bohemian life. The first stop down the steep hill is, without a doubt, the outlook near the top, where the Guápulo neighborhood begins. Visitors can see the Guápulo church, gaze at the Camino de Orellana and understand how Quito expanded into this eastern valley.

Next to the outlook, on a dead end street, is Stubel Suites & Café which, in addition to lodging, has a cafeteria and bar offering an unmatched view. It´s worth emphasizing that Guápulo is much more enchanting at night than during the day because the neighborhood is full of arts and other activities that sprout at dusk. 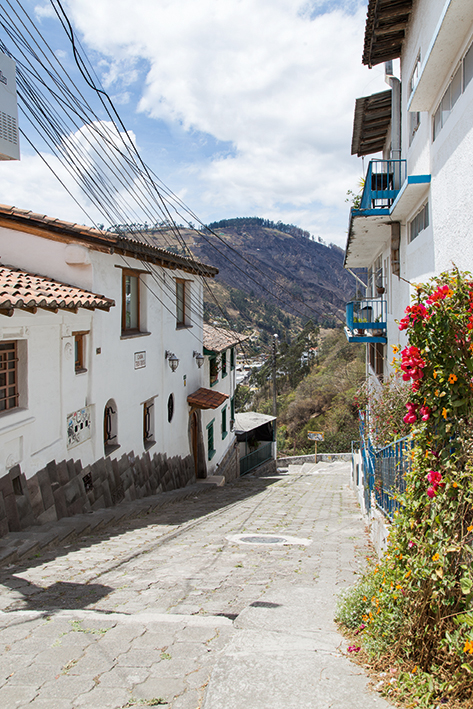 Understandably, breakfast and lunch options are few. Stubel, La Terraza de Guápulo and Warmi are among the few establishments that open before 6 p.m. La Terraza is a distinct experience because it´s actually on the terrace of a house. Cafeteria style service is impeccable, with breakfast served from 11 a.m., and whose pancakes and egg stuffed “arepas” are the stars of the menu. Service is very personal and reservations are accepted. 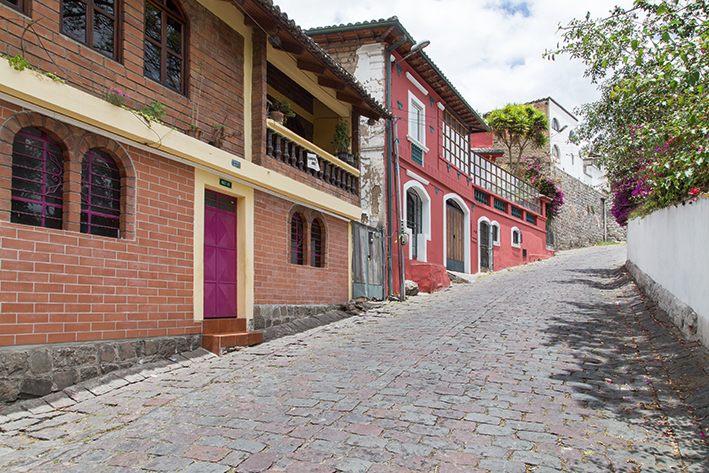 The neighborhood still maintains that feeling of an undiscovered treasure. After only a few steps down the Camino de Orellana visitors can already sense they are heading out on an expedition. The prevailing color is green and the houses retain their colonial look. It´s as if a small town had been detached from the large city of Quito, a small town with its own artistic personality, where people of very different social-economic levels mingle and all share the same feelings of attachment and affection for Guápulo. Residents are well natured relaxed people who go about their daily activities mostly on foot, far from the bustling Quito traffic.

On the way to the church is Rayuela, a handicrafts store that is also an enchanting house. Here is a wide selection of art works made with wood or papier maché and kitchen utensils made from coconut, as well as essences and soaps plus some exotic ingredients for sophisticated cooks. Rayuela also provides pottery and painting lessons. Lucky visitors will coincide with an ongoing class and watch craftspeople working their art. 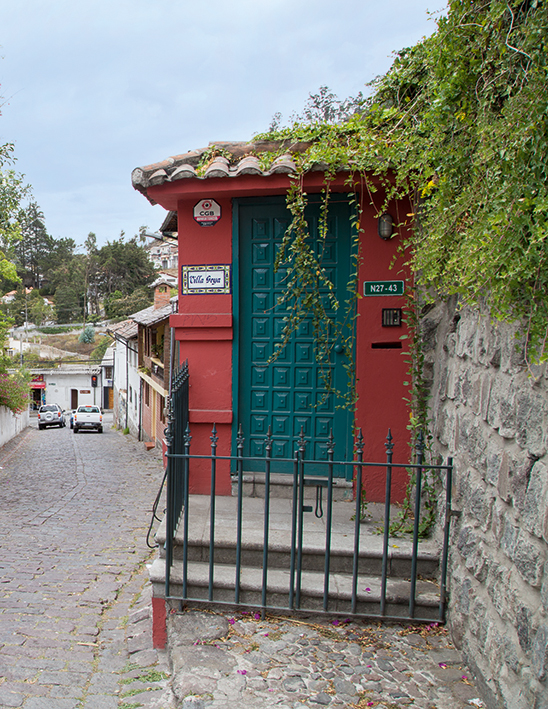 Towards 6 p.m. the Camino de Orellana starts to wake up. Its bars and cafés are well known, particularly by people who enjoy the milieu. These are not elegant places but they certainly are cozy, full of music, art and interesting people. One obligatory stop is Café Guápulo, good for a glass of wine or a cup of coffee, or even a “canelazo”, a traditional ecudorean drink whose aroma can be noticed from the sidewalk. La Lagartera and Palo Santo are other choices in the café bar concept. Unfortunately, nightlife in Guápulo doesn´t go on forever, as most bars begin to close down around midnight.

Ananké is the spot for pizza lovers. The pizzas are prepared with fresh ingredients and baked in a wood stove. 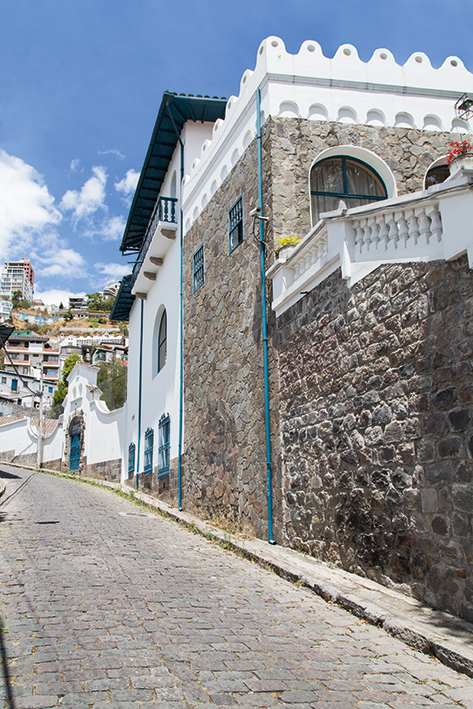 What other daylight activities are available in Guápulo? Besides admiring the views, the best option is to walk down the hill towards the church. Its cupolas are similar to those of Quito´s main Cathedral in the colonial downtown. The similarity arises from the fact that both churches belong to the same period and the same architectural style. According to its Franciscan priests, the Guápulo church, built in 1620, is one of the best heirlooms from the colonial period. Inside is an image of the Virgin of our Lady of Guadalupe, or Guápulo, an image that was a reference for Our Lady of the Swan and the Virgin of Quinche. 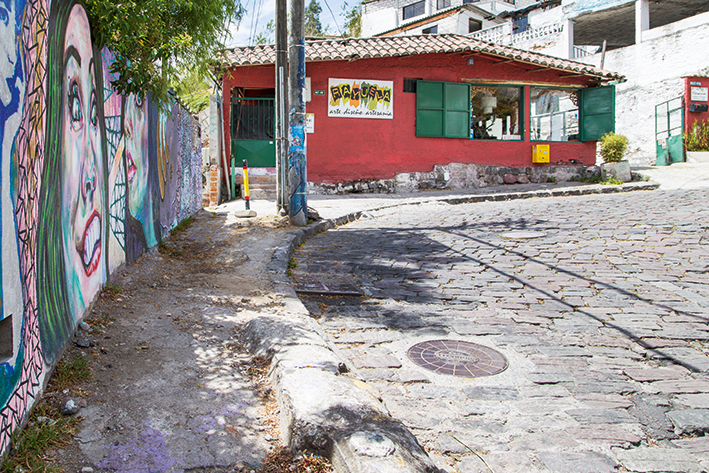 In a very unfortunate fire in 1929 many of its gold and silver objets d´art were lost. Most of what was rescued was taken to the main Cathedral. To revive the faith and stimulate visits to the sanctuary, religious pilgrimages were promoted, a custom that is still alive today, particularly in the month of May. Guided tours of the church are available from Monday to Friday from 9 a.m. to 6 p.m. Weekends are usually the time for weddings, christenings and first communions, which sometimes are spectacles themselves. Next to the church is an old convent where a university is now housed. 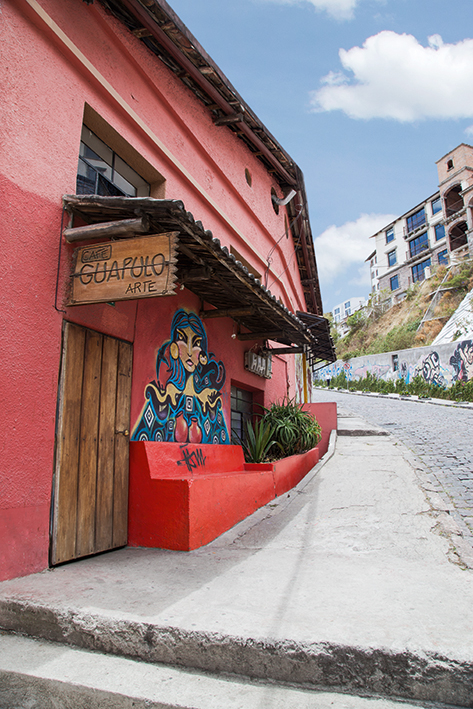 In the cobblestone plaza that fronts the church are several century old trees, a sun clock placed there in 1863 and a monument to Francisco Pizarro. To one side is Quinta Santa Rosa, residence of the Spanish ambassador. Other nearby colonial houses were converted into residences for the United Kingdom and Belgian ambassadors and for officials from several European delegations. A few buildings house suites for sculptors, musicians, writers, noblemen, poets and lunatics, all of them living invitations to join the colorful and cheerful lifestyle in Guápulo.

September is the best time to visit Guápulo because it´s the time for traditional neighborhood street parties when the whole community comes alive with music, dancing and unlimited joy. 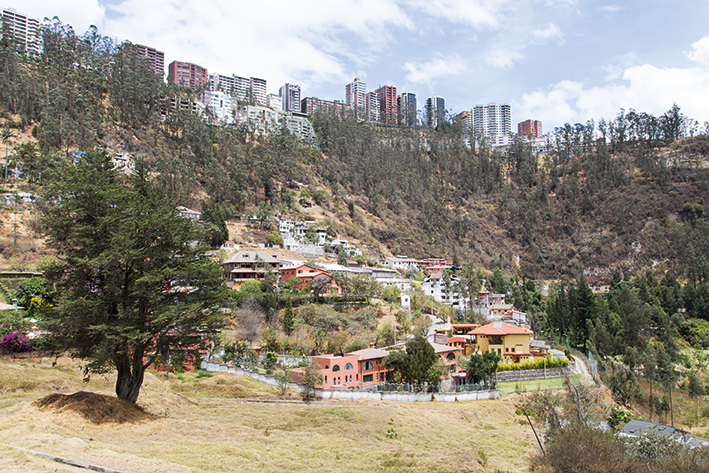