GOTHIC TEMPLE OF THE XIX CENTURY

Walking the beautiful streets of the old Quito is a treat for everyone, foreign visitors, as well as local tourists widely admire it. One of the crown jewels you can´t miss is the enormous neo-Gothic monument built in stone and cement, which stands almost 100m high at the traditional Loma de San Juan.

It is the Basilica of the National Vow, a huge temple that stands out as the largest of its kind in South America, and was conceived as a perpetual reminder of the consecration of Ecuador to the Sacred Heart of Jesus, on March 25, 1874, during President Gabriel García Moreno´s second term. 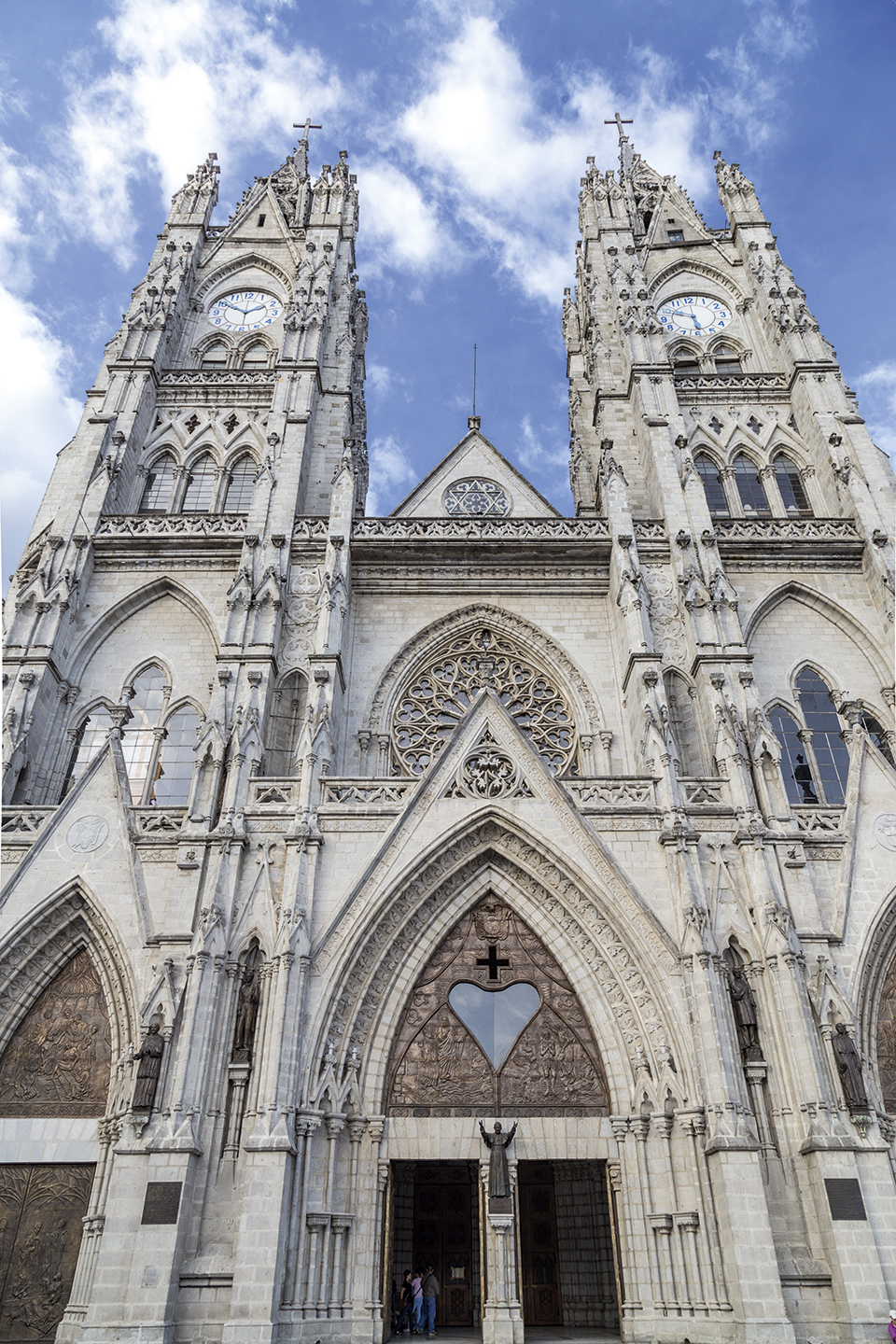 It is considered the most important neo-gothic architectural work in our country. It holds a central nave of 140m long by 35m wide, and two smaller naves. The structure reaches 30m in height in its central spot and 74m in the cruise. Inside the church you will see 14 bronze images representing eleven apostles and three evangelists, plus 24 chapels arranged on the sides of the central nave, representing each of the provinces of Ecuador.

The frontal towers are 115m tall, and from them you can enjoy a spectacular view of the city. In this area, condors, bird symbols of Ecuador, have replaced the typical gothic gargoyles. 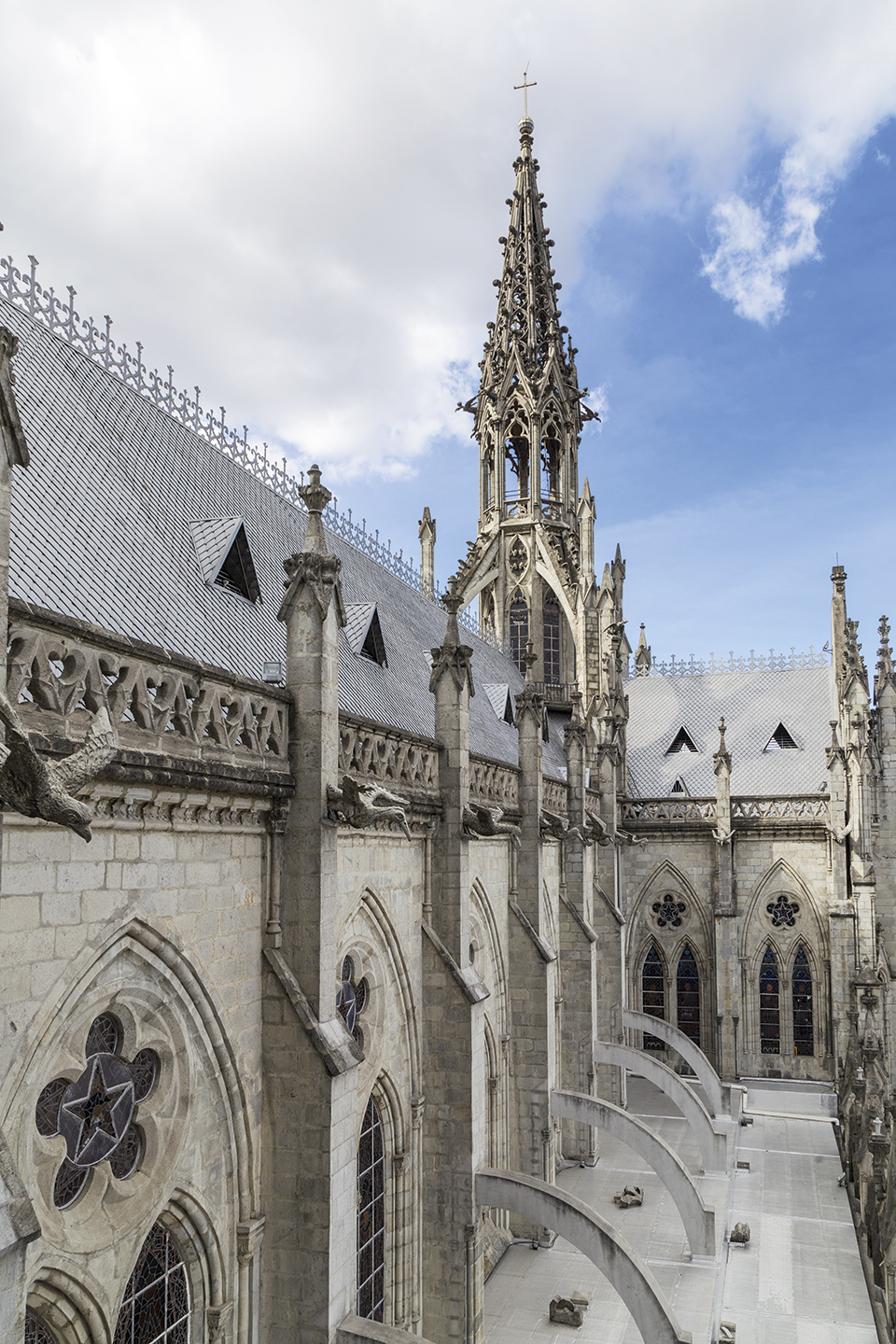 The main altar distances itself with Gothic style giving it a touch of originality. Likewise, the “gargoyles” represent endemic and exotic animals of Ecuadorian fauna such as alligators, turtles, boobies, armadillos, monkeys and pumas, among others, exposing a unique touch of this unprecedented style of Ecuadorian neo-Gothic.

The main façade facing Carchi Street welcomes visitors with a Virgin Mary sculpture and another of Pope Juan Pablo II. The shape of the Heart of Jesus crowned by a Latin cross can be seen in the center of the entrance doors. 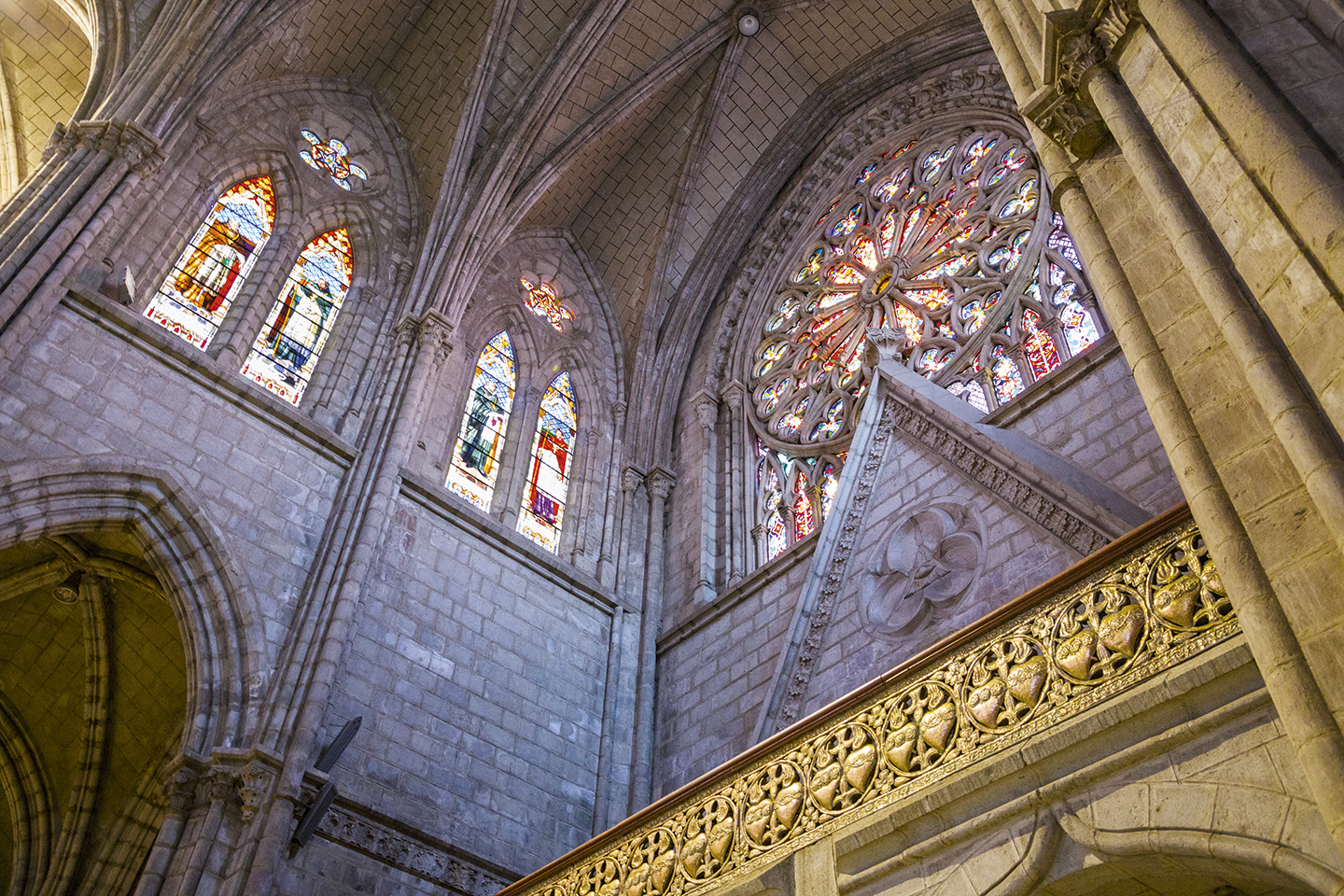 Three access doors on the facades show different scenes: Jesus life, the Creation, and Spanish conquerors arriving to our lands and the reception by indigenous people. The four side doors show representations of the sun and other constellations.

The Basilica has large stained glass windows depicting scenes from Jesus and Virgin Mary lives; rosettes designed with colorful lilies and orchids adorn the choir walls at both ends of the main altar, and a public crypt located in the basement hides a chapel. 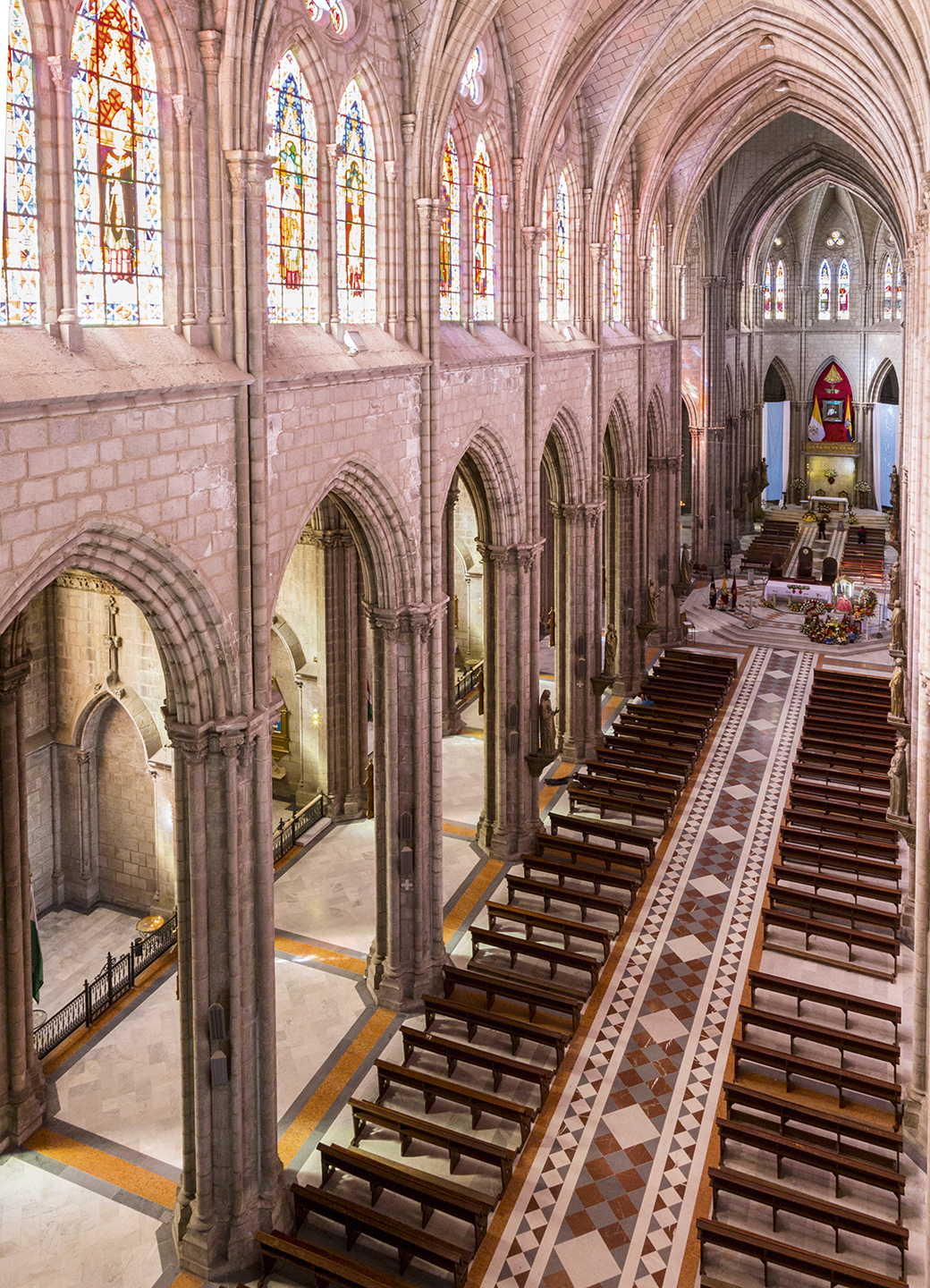 In 1883, Priest José María Matovelle promoted the construction of this catholic monument. Its location was defined on lands at El Belén sector; however, studies determined that the soil was not solid enough to support a building of this magnitude and thus, the location changed to the Hurtado family´s farm located in Santa Prisca.

Once the site was defined, the responsibility of the architectural work was granted to a French architect, Emilio Tarlier, an experienced builder of similar works in Spain, France and England. As history states, the famous Notre Dame cathedral (Paris) was the main inspiration for this creation, because Tarlier defined the blueprints of the Basilica between 1890 and 1896. 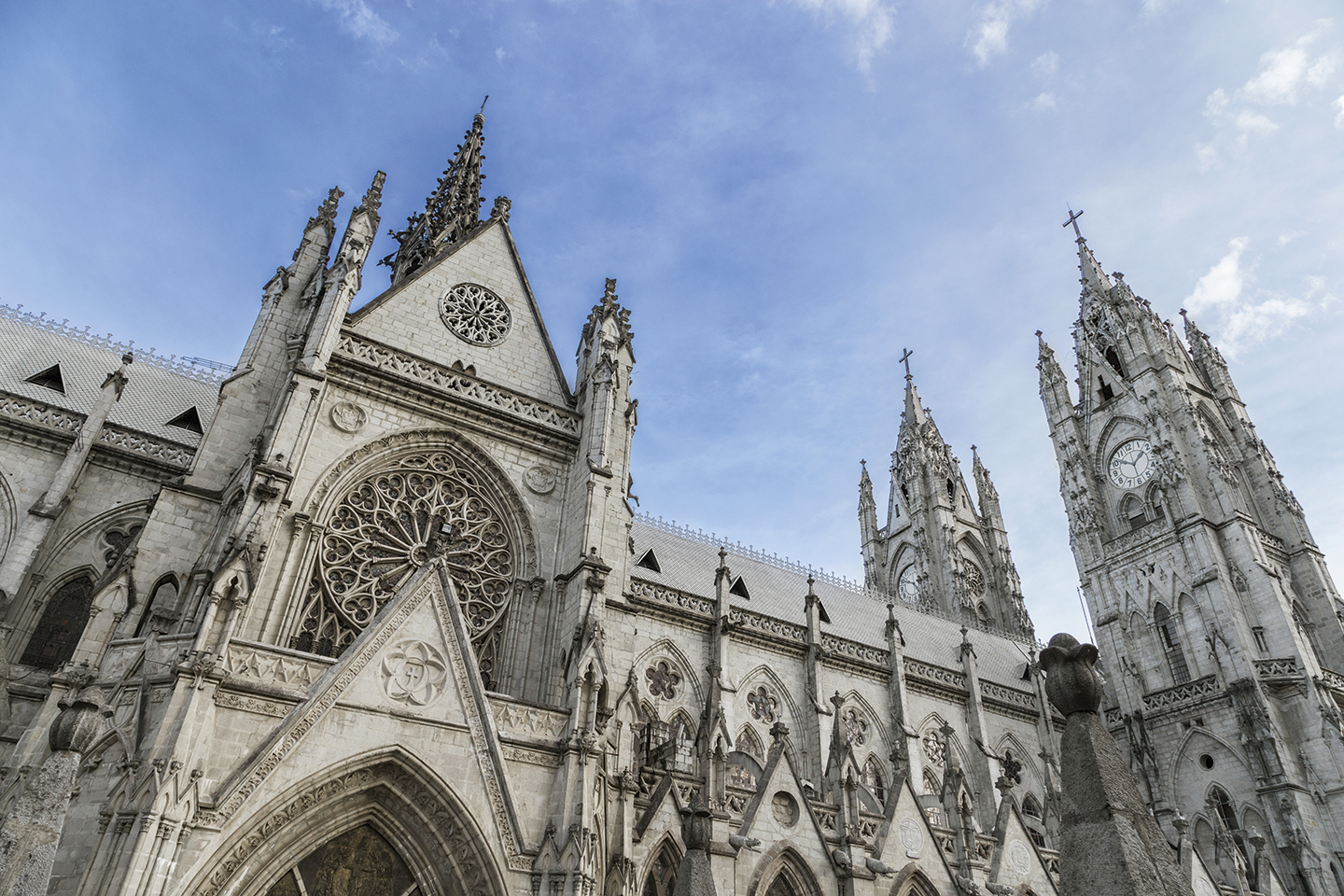 Through presidential decrees issued during Luis Cordero Crespo (1883) and José María Plácido Caamaño (1884) governments, work began with an initial budget of 12,000 pesos from the National Treasury. On July 3, 1885, the Fourth Concilio Provincial Quiteño declared the Basilica construction as the country´s religious commitment, and after Pope León´s XIII approval began its construction in 1887.

Financing its constructions presented some difficulties; it was not until July 10, 1892 that the first stone was placed in a ceremonial celebration. The National Treasury continued to contribute economically and in 1895 created a tax on salt purchases to raise money. The clay and brick construction of the Chapel Inmaculado Corazón de María, currently located in the northern part of the temple, was concluded in 1909. 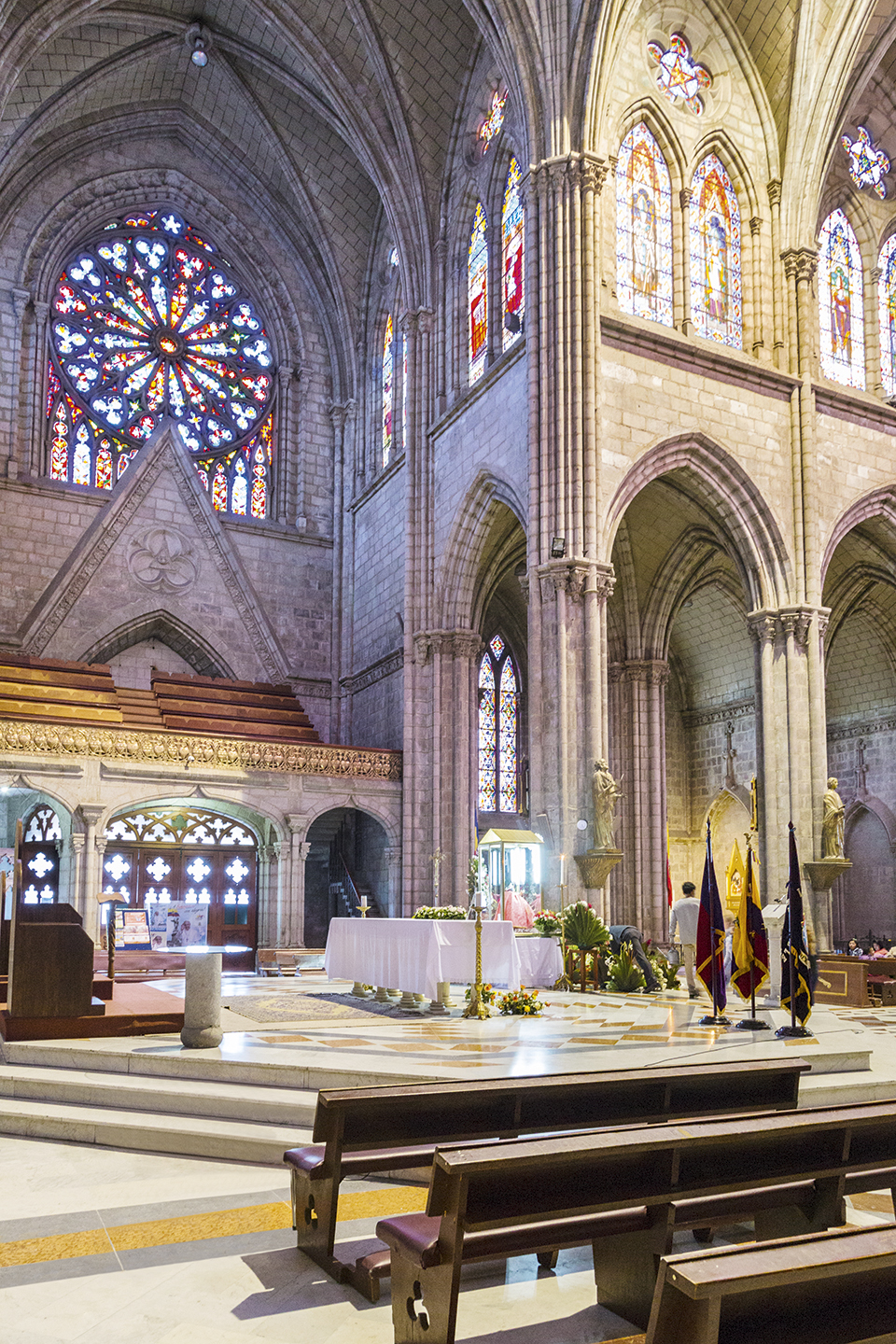 The Basílica construction took more than one hundred years. The structure was completed in 1924 and thereafter masses were performed, but the official inauguration took place on July 12, 1988, after receiving the blessing of Pope Juan Pablo II during his visit to Quito in 1985. 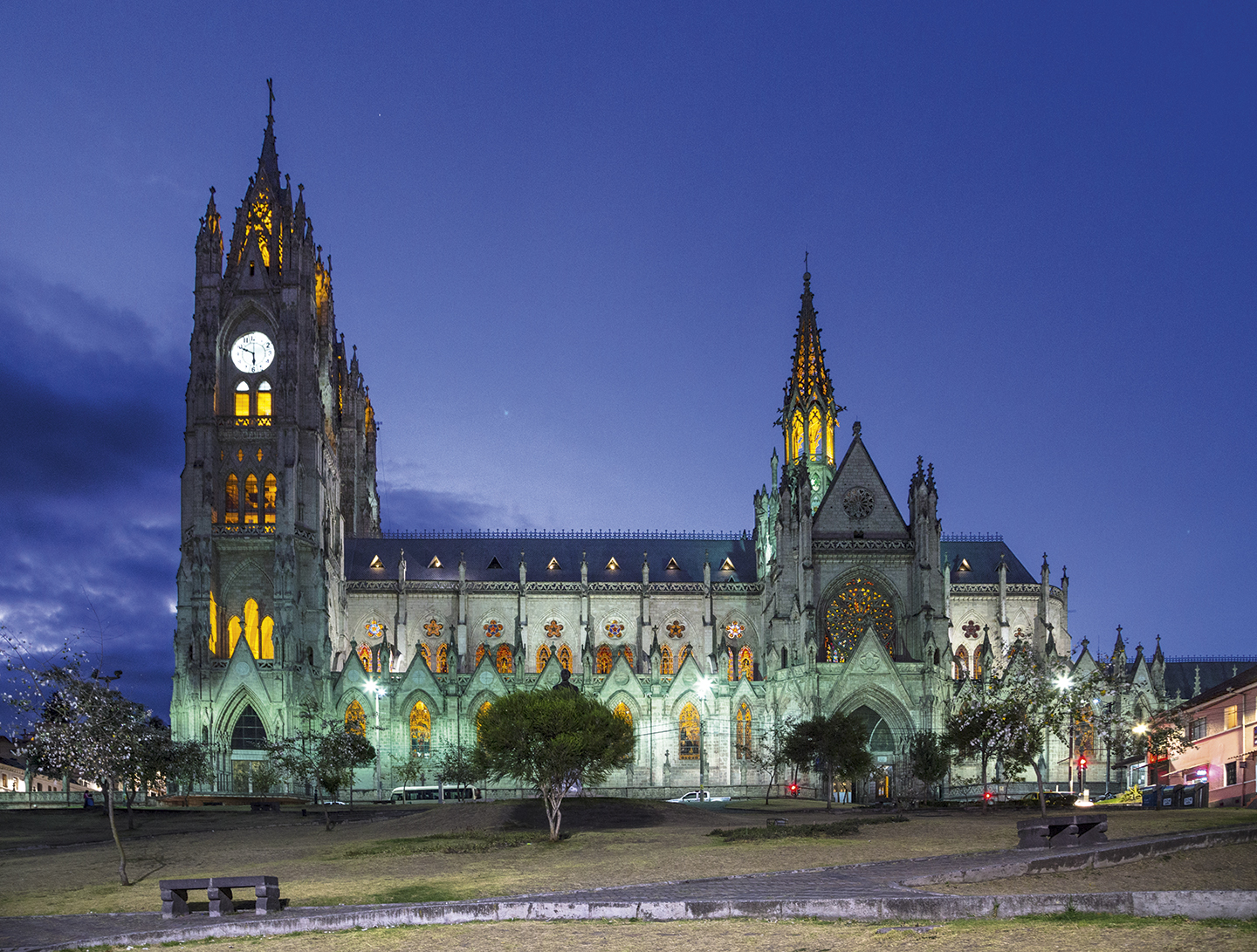 The Basilica of the National Vow continues to be one of the most recognized symbols and adored places by the inhabitants of Quito, who appreciate this religious symbol located at the best-preserved Historic Center in Latin America.