To witness the encounter between the city of Cuenca and France implies a walk down the path of time, collecting stories and anecdotes and reviving beautiful memories. This path is intertwined with the development of Cuenca, which was forever changed by the arrival of the first French Geodesic Mission in 1739, to the important French influence that occurred in the late XIX century and early XX century. The purpose of the Mission was to measure the length of one degree of longitude at the Earth´s equator in order to determine experimentally the shape of the globe. 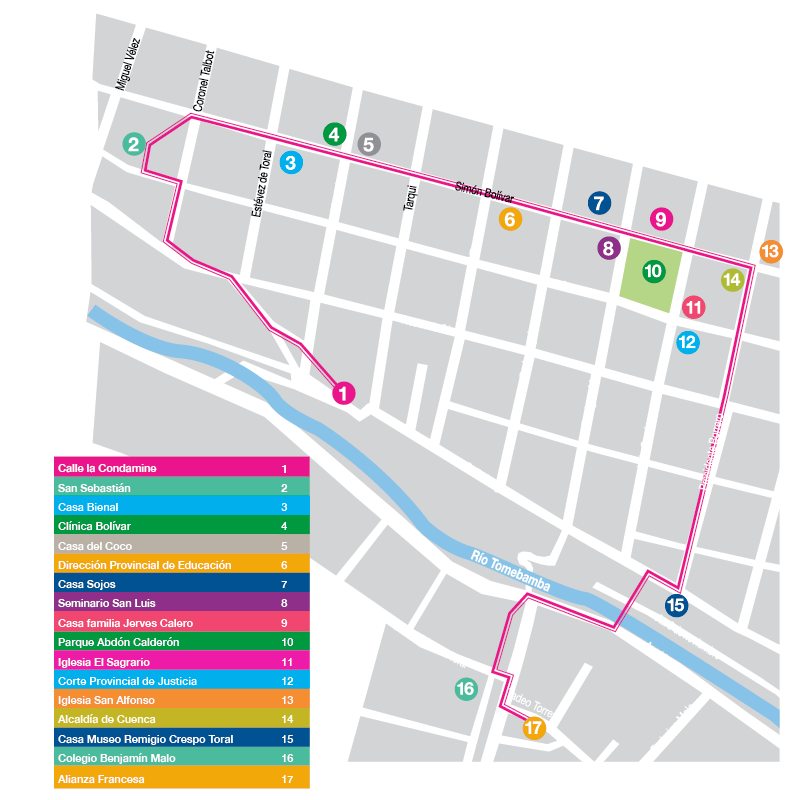 Named in honor of Charles Marie de la Condamine, a renowned scientist and leading member of the first Mission who lived here during his stay in Cuenca in 1739. This street recalls times when artisans plied their crafts along the Cruz del Vado Plaza and when poets and musicians held celebrated meetings. 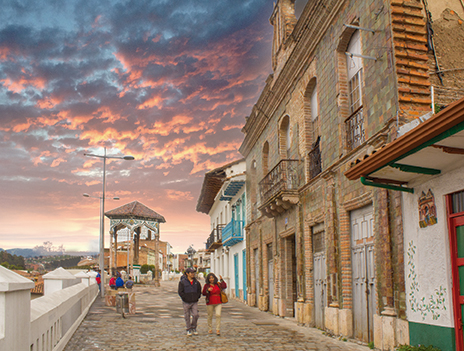 The Renaissance-style geometric design of this square was inspired in the parterre gardens of Versailles. In colonial times, bullfights were organized in this square. In one of them, held in late August 1739, the tragic death of John Seniergues, doctor of the First French Geodesic Mission, occurred. 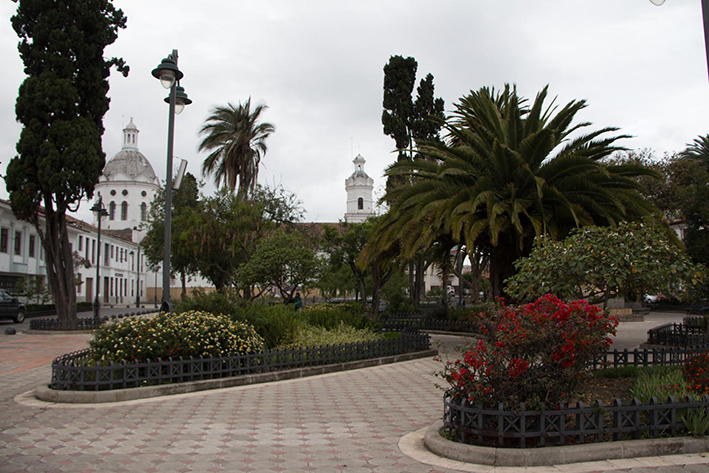 This place is home to the Municipal Foundation of Cuenca. It´s interior and exterior designs were made by José Antonio Alvarado (1884-1988), who purchased this building in 1907 and then remodeled it according to his needs as a merchant and trader of imported French decorative elements. The house is a permanent exhibition of different styles of hand embossed brass and wallpaper. 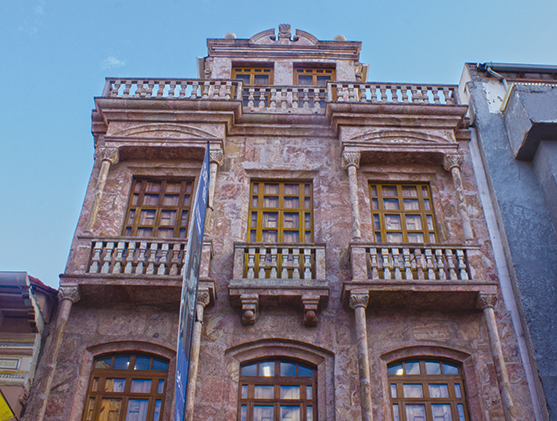 This house, built in 1929 as a residence for Manuel Ullauri and his family, is notable for its large-scale architecture and neoclassic French style. In 1982, the Bolívar Clinic Foundation acquired the property and converted it into a health center. 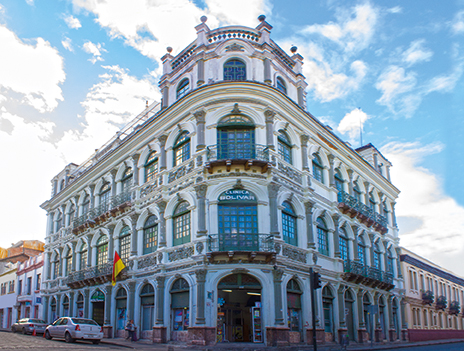 This is one of the best examples of blending colonial style architecture with French interior design. Built in 1890 by Florencia Astudillo, the wealthiest woman in Cuenca at that time, it included a chapel in the upper floor of the second patio so she could go to mass without leaving her house. The Catholic church later inherited the house. In the 1960s, Ernesto Moscoso purchased it and, two decades later, converted it into a shopping mall named Casa del Coco, an allusion to Moscoso´s nickname. 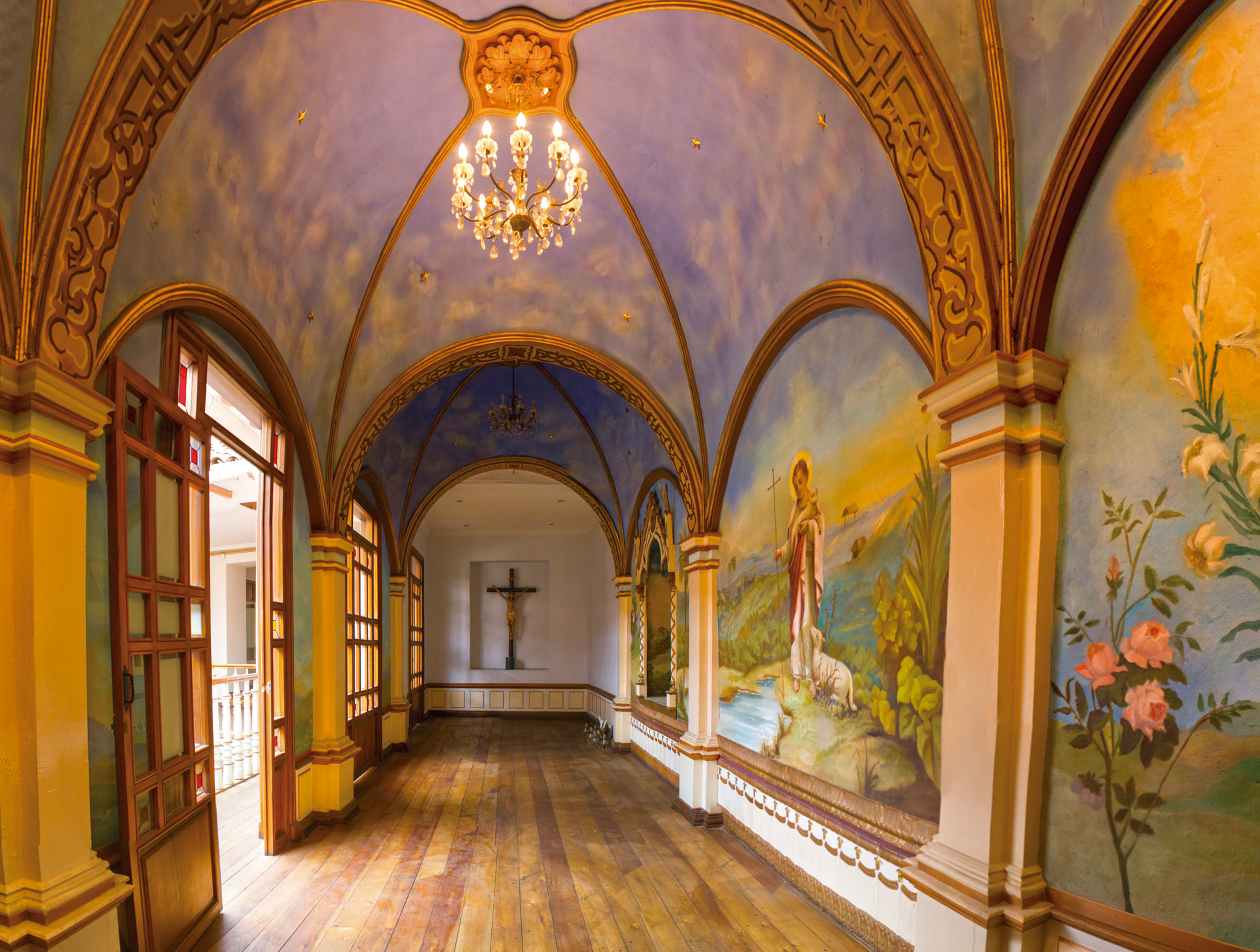 This building represents the majestic elegance of the neoclassic architecture of the 1930s Republican era. Currently it´s occupied by the provincial headquarters of the Ministry of Education. 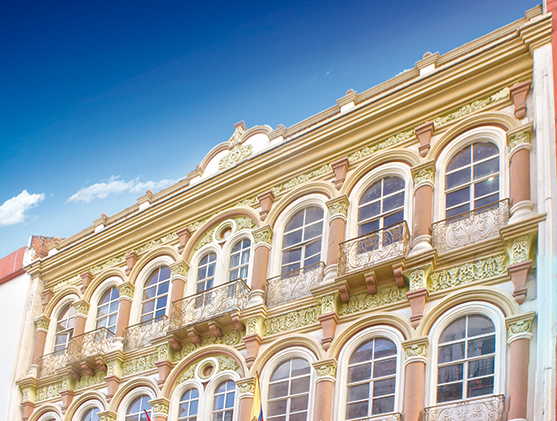 Originally this property belonged to the Malo Tamariz family. In 1907 it was purchased by doctor Benjamín Sojos who, in 1910, built a new façade using cement imported from France, a first in Cuenca. On the ground floor the old Sojos pharmacy is still open, selling traditional homemade remedies such as essential oils and bicarbonate of soda. 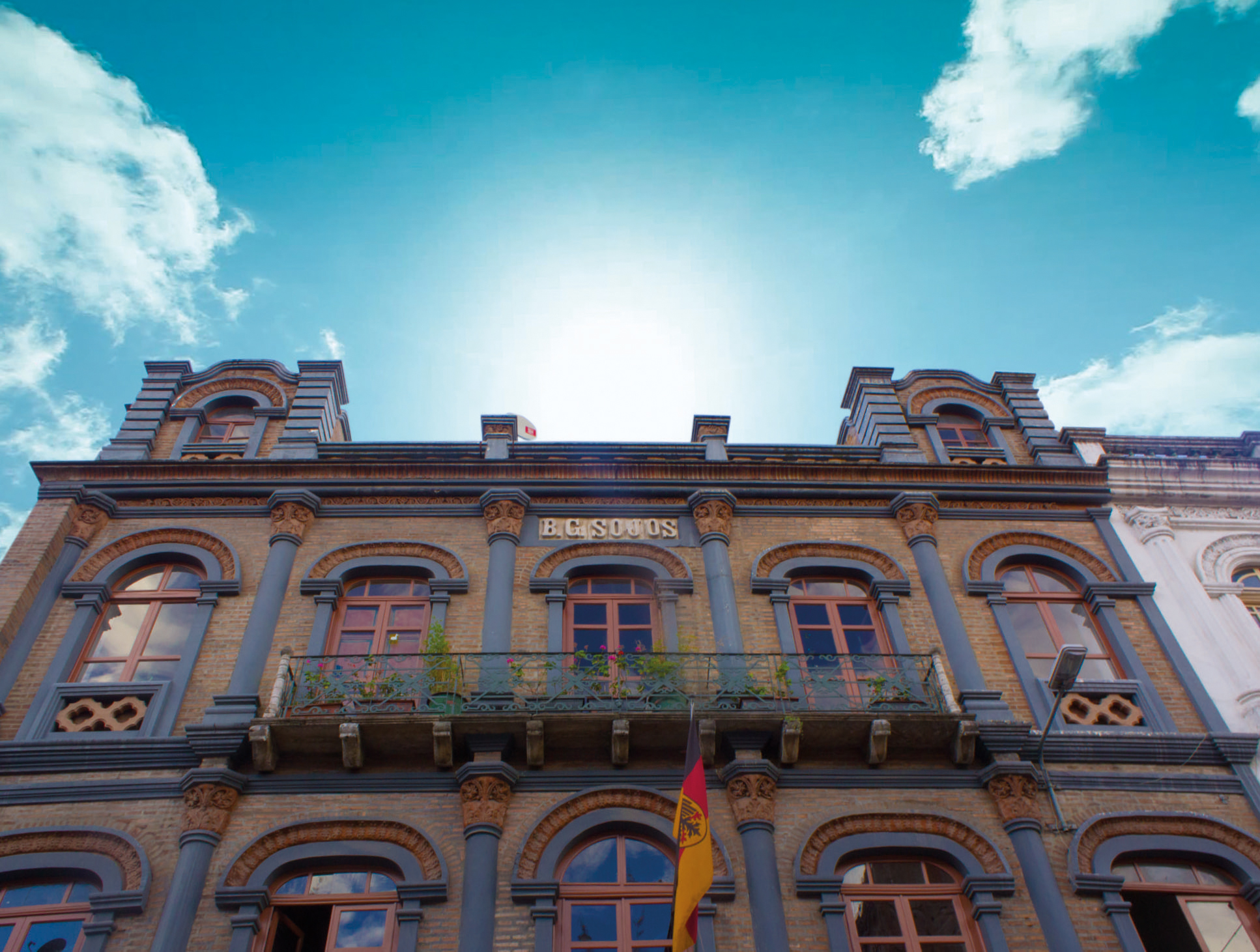 The first Council Seminary was opened in Cuenca in 1813 and it became the only college level educational establishment in southern Ecuador. The Archdiocese of Cuenca recently restored this building for church offices. From its magnificent interior patios, visitors can gaze at the cupolas of the Immaculate Conception Cathedral. 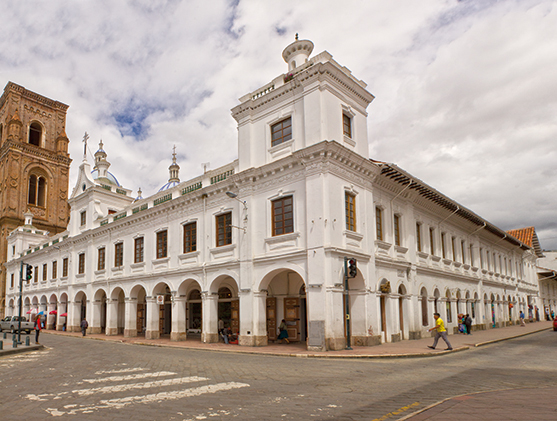 Its owner, José Calero, built the estate in 1917. This house is a reminder of Cuenca´s golden days of the export booms of the misnamed “Panama” hats (handmade in Cuenca with toquilla palm) and cascarilla, used internationally for some time as a tonic, a stimulant and a fever reducer. 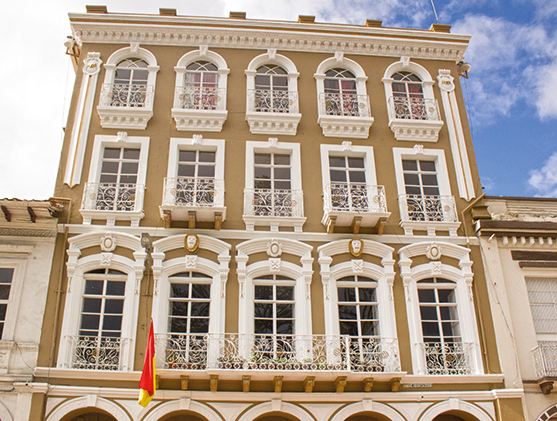 This is the true center of town, the venue for all major political, religious and festive occasions. Its surrounding buildings witness the centers of power in the city, the Municipal and Provincial headquarters, the old and the new Cathedrals, and the Provincial Courthouse. Nearby are several stately old houses that convey the French influence upon Cuenca´s architecture in the early 20th century. In the center of the square, surrounding the statue of Abdón Calderón, a hero of the war of independence against Spain, are eight massive araucaria trees donated in 1875 by Chile to Luis Cordero, a former President of Ecuador. 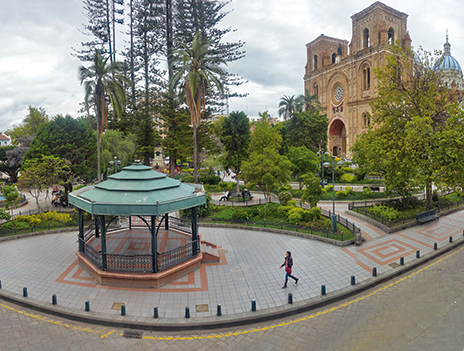 The French Geodesic Mission , upon arrival in Cuenca in 1739 , used the south tower of this church (which was overthrown in the late XIX century and replaced by the current frontispiece), as a reference point basis for its geometric triangulation work. A marble plaque commemorates this fact, with the legend “Tower more famous than the Pyramids of Egypt”, written in 1804 by Francisco Jose de Caldas. 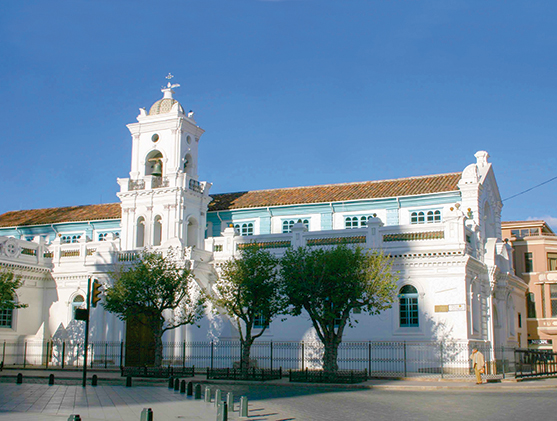 Built in 1929 for the first university in Cuenca, the University of Azuay, it was designed by Francisco Espinoza and inspired by classic French architecture. The marble employed to dress its columns was dug near Cuenca and polished on the banks of the Tomebamba River that flows through the city. The university moved out in the 1970s and the building was later turned into a courthouse. 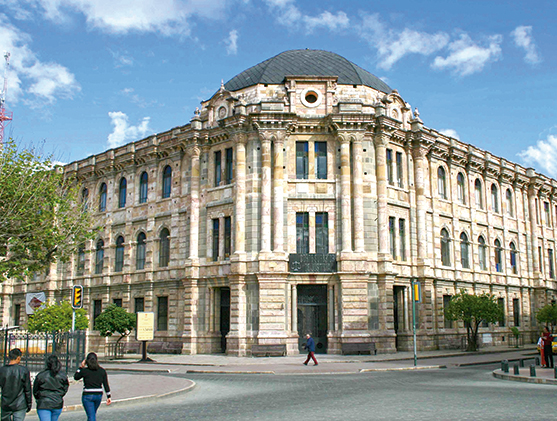 The Redeemer missionaries arrived in Cuenca in 1870. They were granted the church and the convent of San Agustín. Years later, these buildings were demolished and the San Alfonso church was built on the same site. This project belonged to Juan Bautista Stiehle, a Redeemer brother, who had drafted the blueprints for the Immaculate Conception Cathedral. San Alfonso exhibits 92 stained glass windows made in the late 19th century by Louis Victor Gesta in Toulouse, France. The church also has an organ, a Pietá sculpture and paintings of the Stations of the Cross, all imported from France. In 1888, Cuenca´s bishop Miguel Leon dedicated this church to the Virgin of Perpetual Aid and raised its category to a basilica. 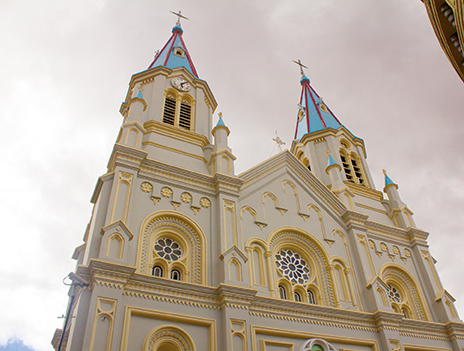 This neoclassical palace built between 1922 and 1926 for the first bank in Cuenca, Banco del Azuay, is one of the best examples of the influence of French Renaissance upon Cuenca´s architecture at the beginning of the century. Its architect Luis Felipe Donoso sought to transmit the grandeur, luxury and financial power of that era. Currently it houses the Municipality´s offices plus a permanent art gallery. 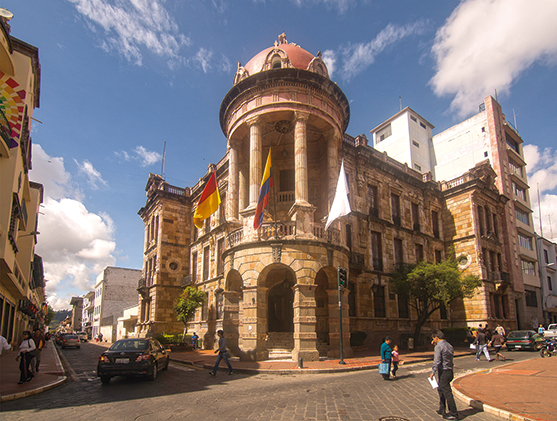 The former residence of a famous Cuenca poet, Remigio Crespo Toral (1860 – 1939), who was also a politician, a professor and one of the leading cultural lights of his time. The museum stores the Municipality´s Historical Archives. For visitors with a scientific bent, it exhibits a marble tablet commissioned by Charles Marie de la Condamine to inscribe the results of the French Mission and the reference points for their measurements. 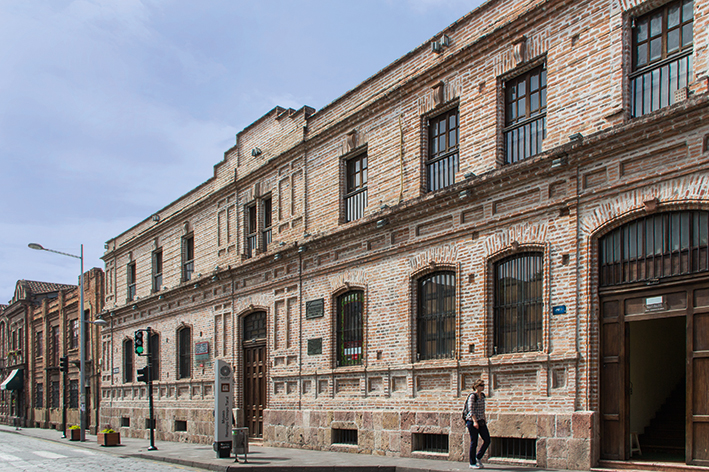 A Renaissance style building also designed by Luis Felipe Donoso and inspired by certain French constructions such as the University of Lyon. It was built between 1923 and 1937, funded with special taxes levied upon local businesses. It was called the “City School” and immediately became an icon of modernity and progress in Cuenca. 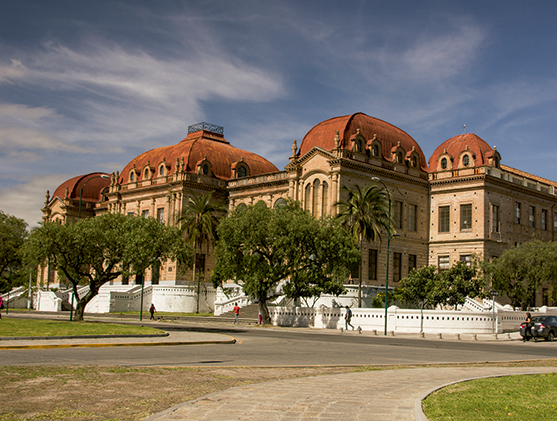 The Alliance Francaise is a non-profit institution created in 1966 with the aim of promoting French language and culture, sponsoring student exchanges and generally fostering better relations between France and Ecuador. This cubist style building, designed by Fausto Cornejo and built in 1983, includes an art gallery, auditorium, library and a kitchen for cooking lessons. It was subsequently remodeled in 2012. 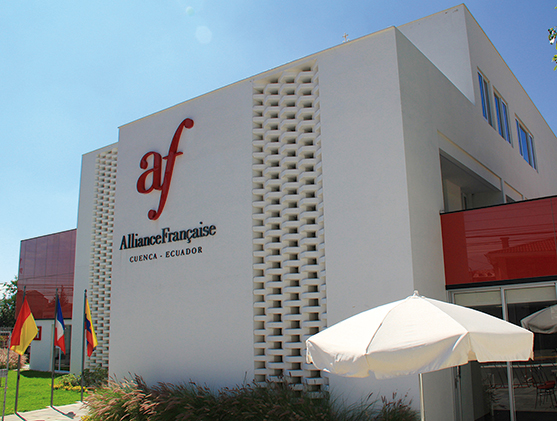