History and art in a magnificent building

The architecture of the Municipal Palace is more independent than traditional. It´s certainly worth a visit not only for its historical content but also for its impressive Renaissance style architecture, adorned with sculpted condors watching from above. Its Doric columns, with a hint of Gothic, are a marvelous sight.

The Municipality of Guayaquil is located in the Rocafuerte sector, in the center of town, and it occupies an entire block bounded by the Simón Bolívar Pier and the Pichincha, Clemente Ballén and Diez de Agosto Streets 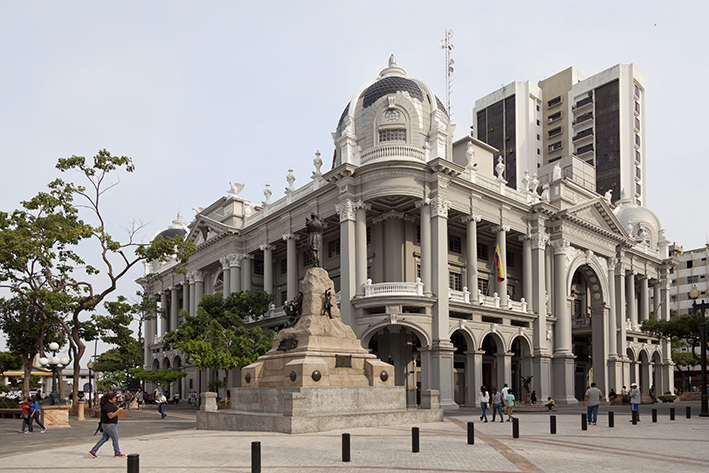 A little bit of history

The Municipal Palace was built on the grounds of the old Town Hall that had served as the Colonial Town Council since 1817. On this 38,000 square feet lot (3.600 square meters) some of Guayaquil´s historical events were enacted. In 1820 the Charter of Independence was signed here, although the old Palace had to be burned down when the bubonic plague arrived in 1908. 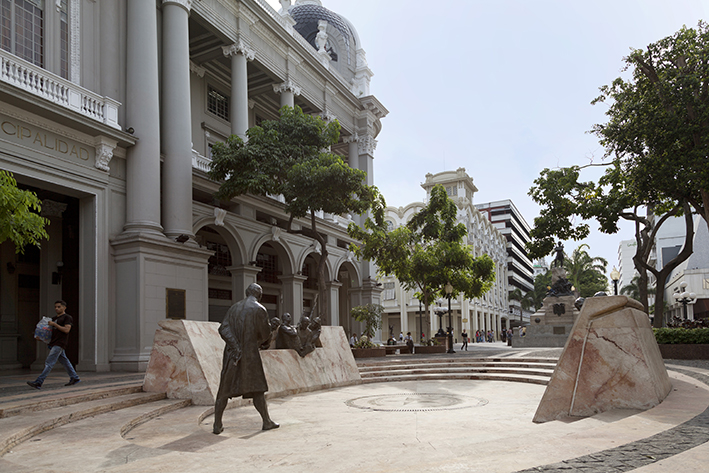 The current Municipal Palace was begun in 1924. The building was designed by Francisco Maccaferri, an architect and engineer. The builder was Juan Lignarolo and the sculptor was Emilio Soro Lenti. It was opened in 1929, celebrating one hundred years since the battle of Tarqui and the signing of the Treaty of Guayaquil. 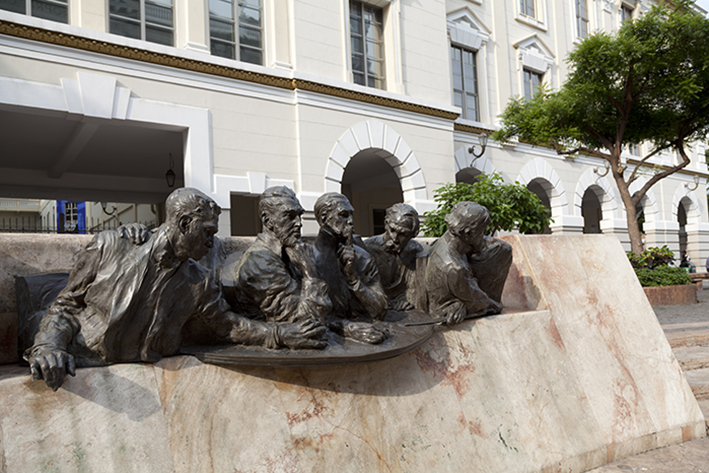 The exteriors show Latin mottos, beautiful plaster designs, bas-relief and impressive iron and cement columns. These columns have resisted several earthquakes including a major one in May 1942. Four Renaissance style cupolas are located at each corner of the Palace and, in the upper triangle on the northern and southern façades, there are vases and allegorical figures. 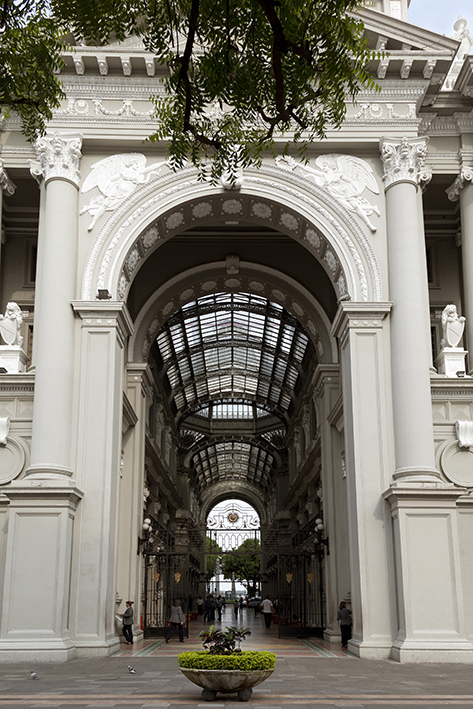 On the Eastern sector of the triangle is a female sculpture with a book on her lap and surrounded by manuscripts. She´s a symbol of knowledge. Next to her is another figure looking West and holding the wheel of industry that hails the understanding of life. The shield of Santiago Mayor, the patron saint of Guayaquil, is also present. In 1999 a wooden sculpture of that shield was placed there after being removed from the façade of the Metropolitan Cathedral of Saint Peter Apostle and donated to the Municipality. 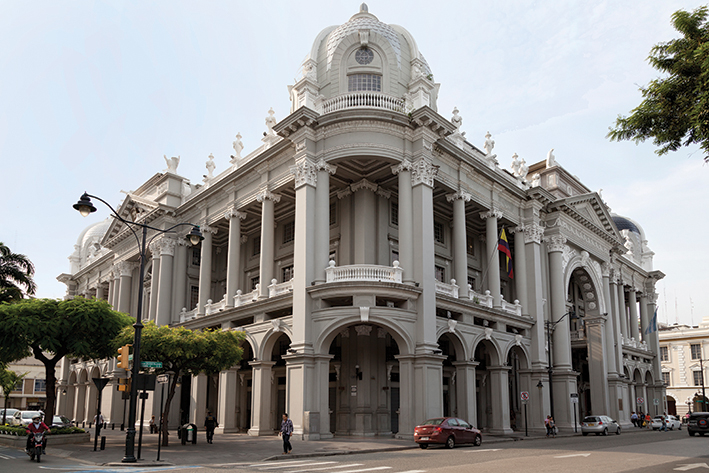 The Eduardo Arosemena alley, named after the banker and first president of Guayaquil´s Beneficent Board, cuts through the Palace to Pichincha Street.

Its entrance, on both ends, has large columns that support gables in the shape of triumphal arches that signal a splendid entrance to the Palace. The alley is covered by a roof made of wrought iron and crystal panes imported from Italy. 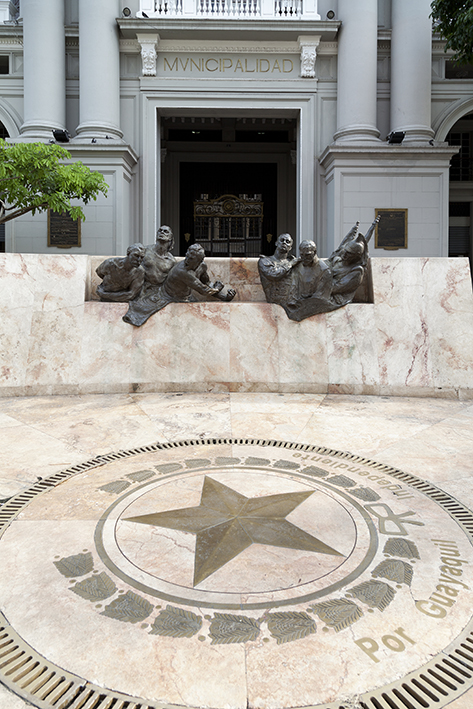 Inside the alley, caryatids, sculpted female figures that take the place of columns or pillars, support the construction; and small balconies adorned with lamps are seen along the way.

Close by the Municipal Palace are other worthwhile places to get to know Guayaquil´s history, such as the Provincial Government, the Administration Plaza and the monument to Vulcan´s Forge. Next to the Palace, inside the Administration Plaza, are small municipal stands selling juices and varied snacks. Benches and water basins beckon visitors to sit down to rest or just to appreciate the beauty of this place. 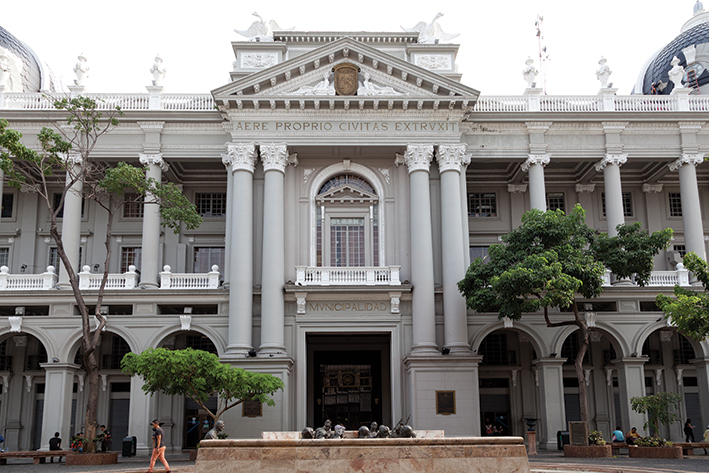 A visit to the Municipal Palace is an obligatory stop for every tourist who is eager to learn the essence of Guayaquil. A walk around these historical monuments with their privileged architecture creates a sense of the monumental splendor and the colonial seaport origins of Guayaquil.