The picturesque corners of the Historic Center shelter imposing buildings that constitute the testimony of Quito’s colonial art, such as the El Sagrario Church: a sacramental chapel attached to the Catedral Primada.

In colonial times, its innumerable details made it one of the most imposing and luxurious churches in Quito, and one visit is all it takes to understand the reason why. It is located on Garcia Moreno Street. On the left sidewalk heading south, walking through the so-called “Street of the Seven Crosses”. 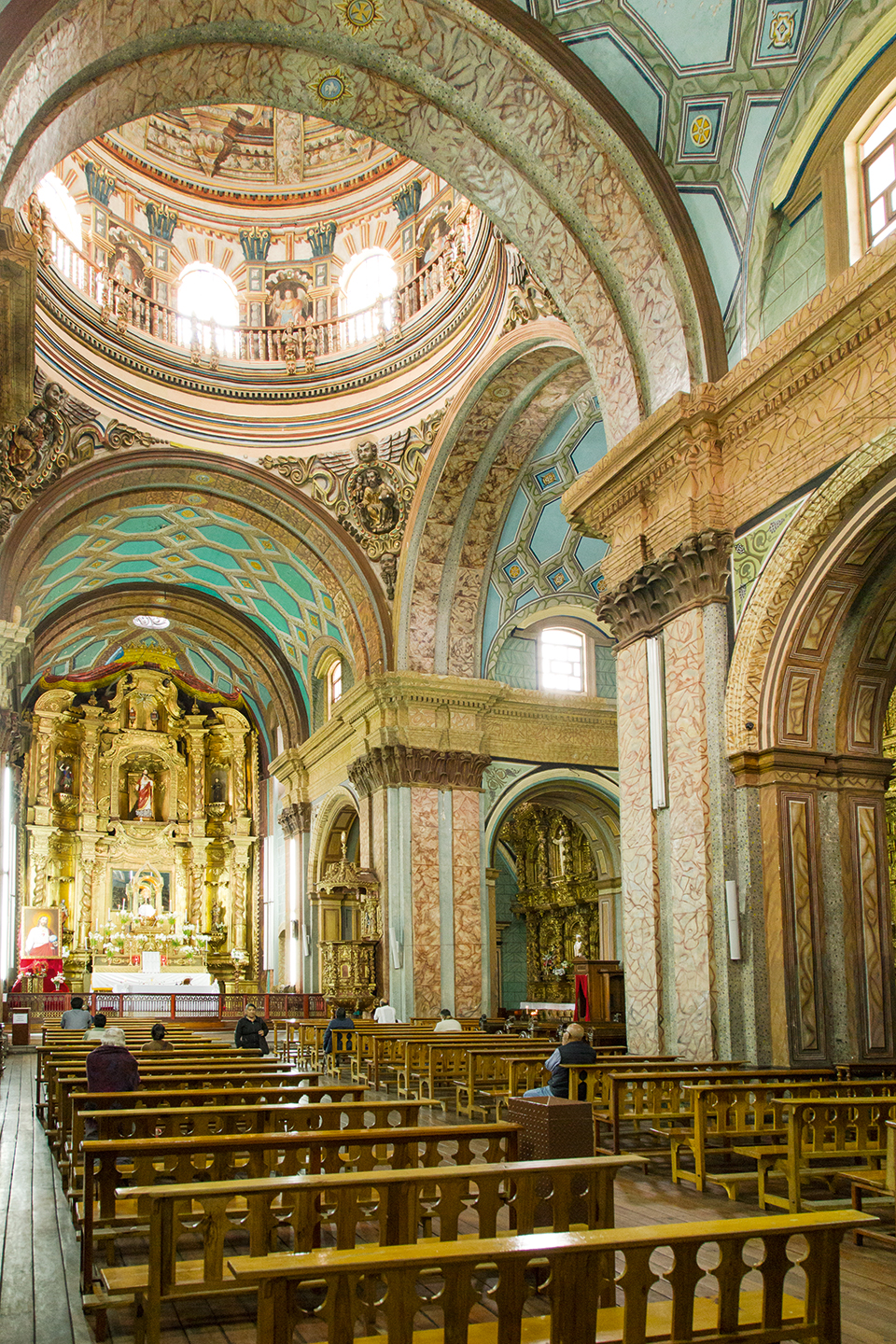 Its construction began in the mid-seventeenth century and ended in 1706. The famous Spanish architect José Jaime Ortiz was in charge of the work. He was hired by the Blessed Sacrament Brotherhood, which was established in Quito in 1543, only nine years after its foundation.

As history tells, the brotherhood was composed of selected and wealthy members who had aspired to build its own church, so once the funds were obtained thru member contributions, they commissioned the design and construction to Ortiz, in 1694. The laying of the first stone was officially made on January 1, 1695 on a piece of land provided by the Municipality, which included a deep ravine that demanded a true act of engineering. The foundations construction took three years. 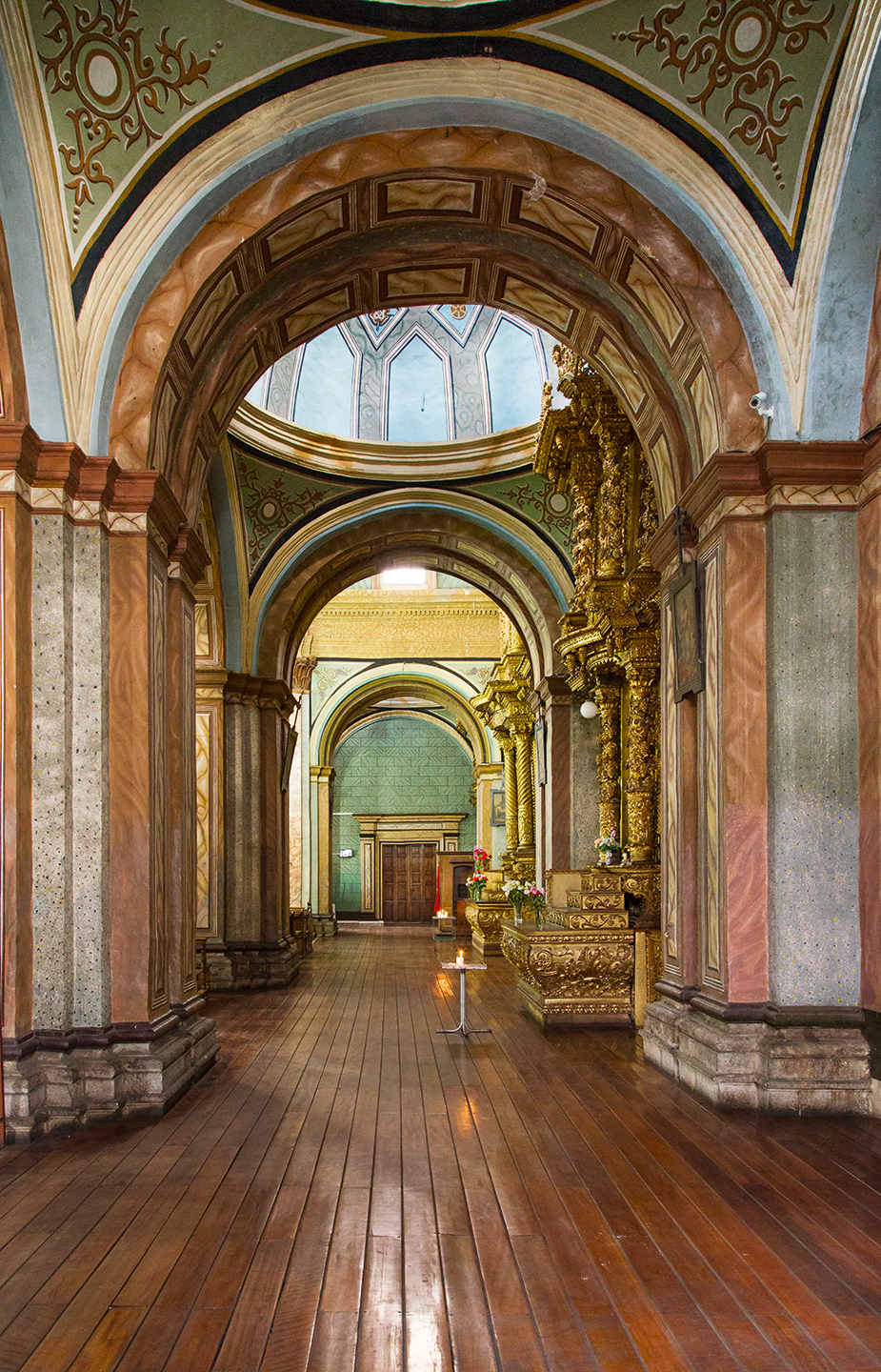 The impressive facade built in stone with baroque style surprises visitors upon arrival. No detail of its construction was left to chance; every spot has its own magnificence.

San Pedro and San Pablo sculptures stand out in the upper section, and on the sides is an interrupted pediment that once housed in its central niche a bronze monstrance, reflection of the main devotion that the Brotherhood of the Blessed Sacrament held to its patron of El Sagrario. The presence of these figures links the church with episcopal authority. 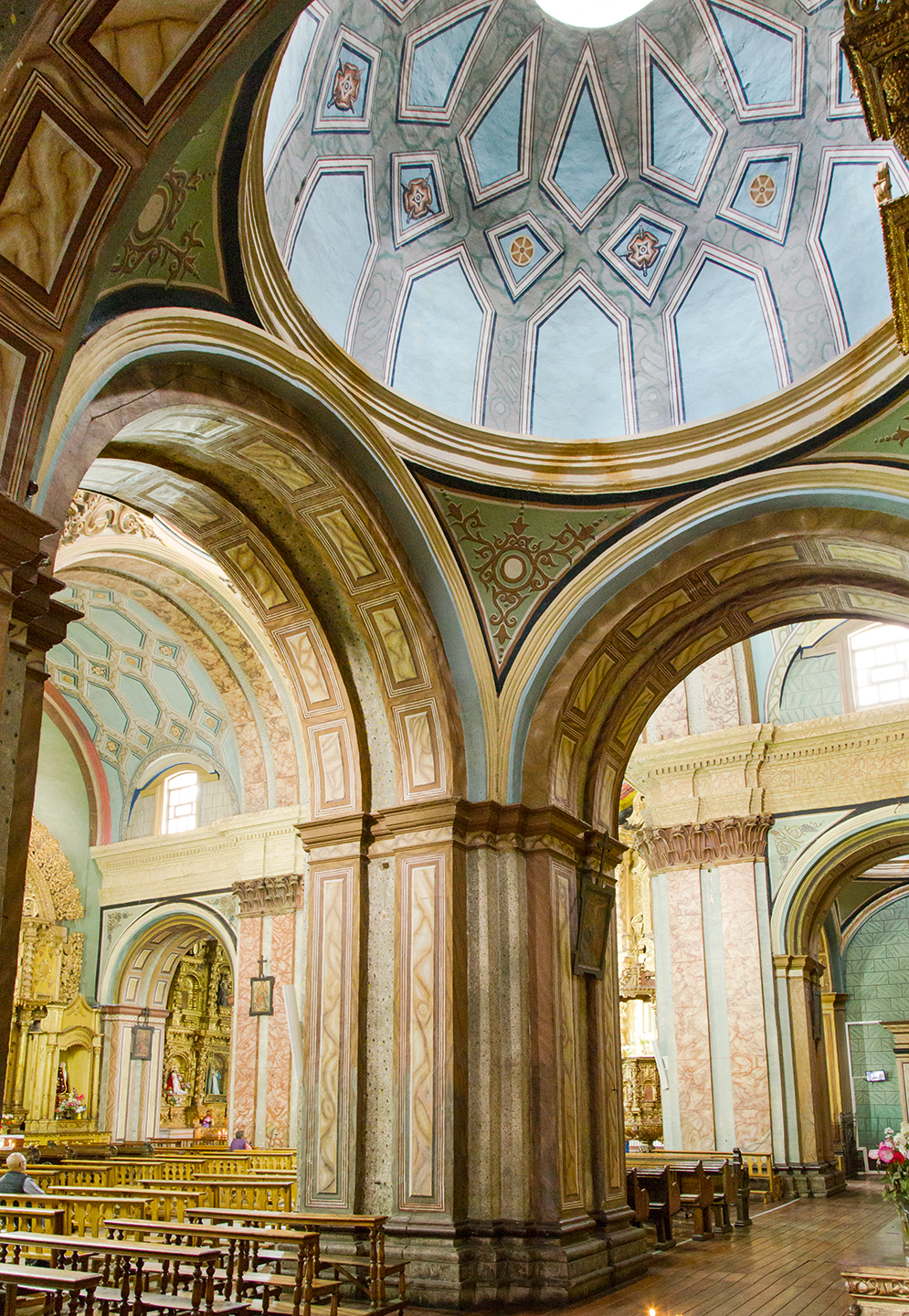 A sculpture that personifies Faith is located below and in front of San Pedro, while in front of San Pablo a figure that represents Hope is found, both theological virtues that are part of the beliefs inculcated for a correct Christian life. Along with these sculptures is the third theological virtue, Charity, represented by a mother caring for three children, to reflect the compassionate and giving nature of the Blessed Sacrament Brotherhood.

Every flat surface of the facade is sculpted with ornaments. On the sides of the stone structure stand two side doors with stone arches and woodcarvings of emblematic elements of the Brotherhood. Upon crossing the door, visitors transit from the outdoor clarity, walk through a stone floor that submerges them in a timid penumbra, that a few steps ahead becomes a soft luminosity again. 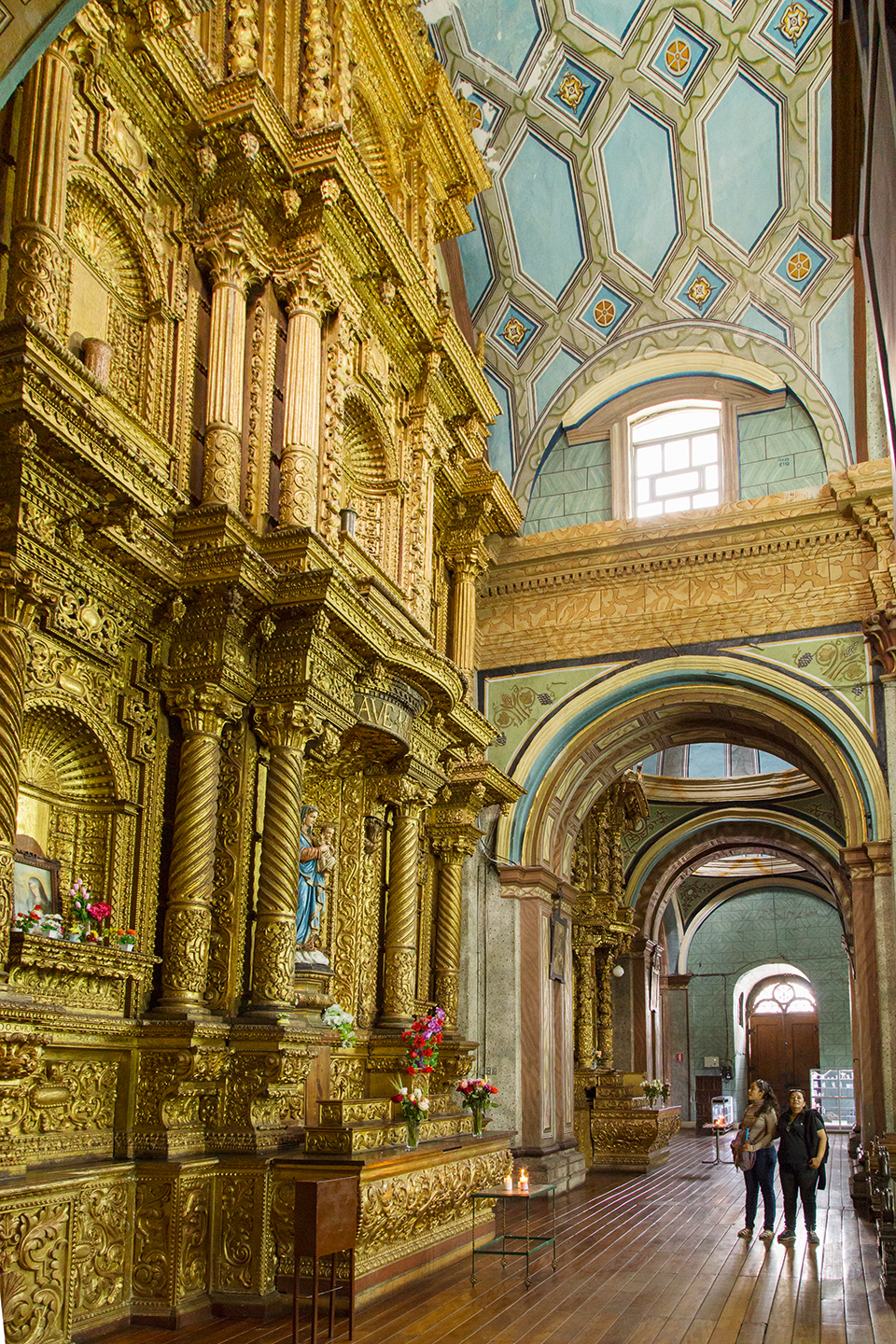 The handwork of indigenous anonymous artists decorated the interior of El Sagrario, as they did in many Quito temples. They did not embody their autochthonous stamp on large elements, but did so in subtle details of the decoration, mocking the rigorous inspection of the Spaniards who were opposed to local expressions.

There is no doubt that once the temple has been fully visited, the gaze is absorbed by one of the most beautiful and rich sculptural pieces of the Escuela Quiteña, that was crafted by the inspirited and genius hand of Bernardo de Legarda. El Sagrario inherited a screen, sculpted and gilded by the master in his workshop in 1747. 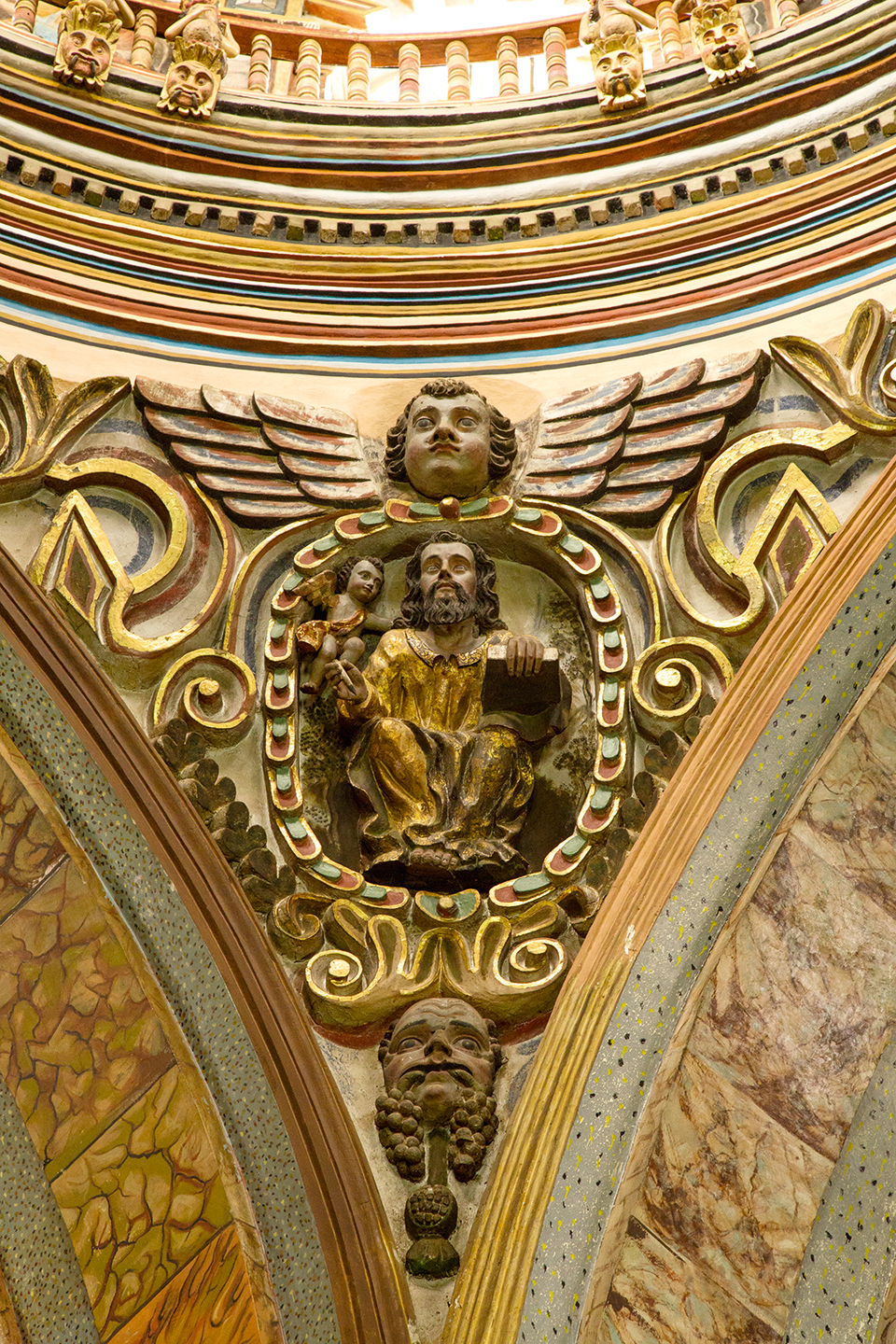 It is a piece of wood with an arch door surrounded by columns decorated with plant forms that culminate in capitals and cornices. Spaces are full with masks and a variety of figures, extraordinarily modeled angels; and in the upper part, with a parapet divided into panels separated by woman statues (caryatids). It would take a considerable amount of time to discover one by one the details that Legarda captured in this work, which is undoubtedly one of his masterpieces. 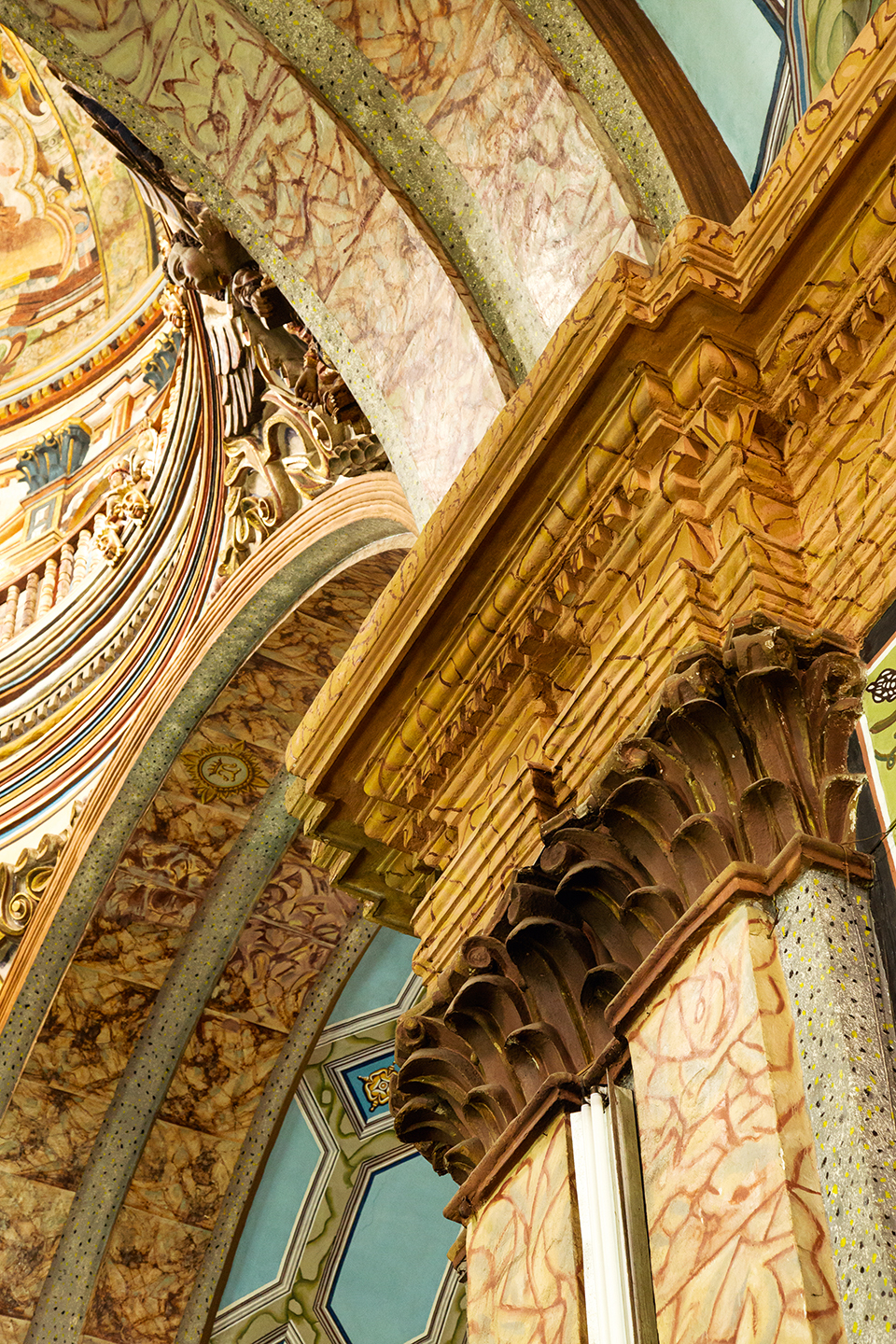 While advancing, the wooden floor creaks at the pace of faithful visitors and tourists who make reverences to the Blessed Sacrament exposed twelve hours a day on the main altar of the temple, welcoming and blessing devotees who continue with the tradition and adoration ritual that has remained vivid for over 400 years.