A huge sculpture was placed there in memory of those patriots. At the top of the statue is a majestic image of Liberty.

Independence Plaza, colloquially known as Big Plaza, in the heart of Quito’s colonial downtown, is the place where the Spanish conquistadores founded the city. Enclosing the Plaza are four key national buildings: the Presidential Palace, the Municipality, the Metropolitan Cathedral and the Archbishop’s Palace. 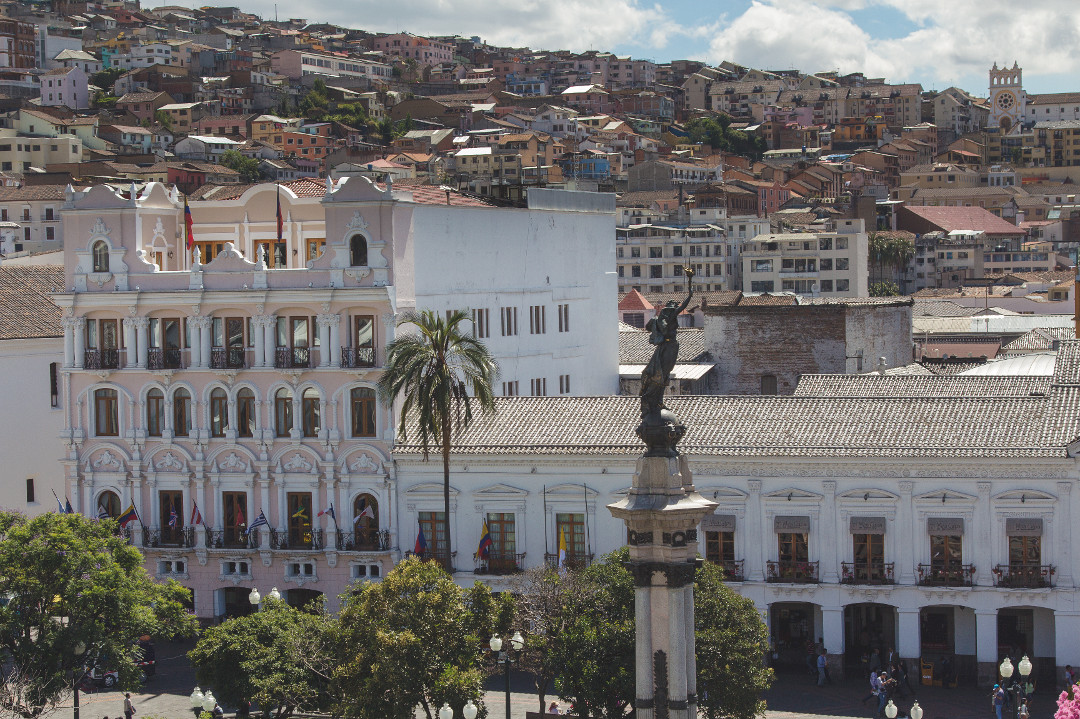 It was officially named Independence Plaza in 1906, almost one hundred years after Quito’s first independence movement against Spanish rule on August 10, 1809. A huge sculpture was placed in memory of those early patriots. At the very top of the statue is a majestic image of Lady Liberty, represented as a Roman goddess, a symbol of this critical event in Ecuador’s history.

Along the statue’s base there are four commemorative plaques, cast in steel. The main plaque, placed there by President Alfaro the day this monument was inaugurated, retells the story of the first independence movement. Another plaque depicts the scene when Quito’s Declaration of Independence was signed. The third plaque has the actual text of the Declaration. The last one depicts the assassination of the patriots by Spanish soldiers on August 2, 1810.

The Lady Liberty statue is located precisely in the center of the Plaza. On the western side is the Presidential Palace, seat of the Executive since 1810 and also official residence of the President. For some years in the 1860s the Legislature was also housed here, in a rear annex. It ́s also called Carondelet Palace after a Spanish baron who ruled Quito from 1799 to 1807, at the end of the colonial period, and who had previously served as Spain’s governor in their Louisiana territory. 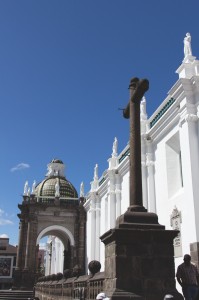 A bloody episode in Ecuador’s history took place on the Palace’s sidewalk. President García Moreno was stabbed by an assassin on August 6, 1875. He managed to stumble a few steps before falling dead at the base of the altar of Virgin Mary, next door at the Metropolitan Cathedral. His last words, “God doesn ́t die”, can be read in the stone plaque placed at the site.

The balconies of the Palace have witnessed many historical events, ranging from emotional rituals, such as feasts and religious processions, to government coups and violent political clashes.

Today, the weekly ritual is the changing of the guard, a spectacle performed promptly every Monday at 11 am by the Tarqui Grenadiers, an elite unit of the ecuadorean army.

On the north side of the Plaza is the Palace of the Archbishop originally built in 1534, the year of Quito’s Spanish foundation. It’s also known as the Palace of the Metropolitan Curia. In the Catholic Church, the Curia is a group of church officials that assist in its local governance. The current neoclassical façade is representative of late colonial age architecture. The stone floors and pillars are adorned with details made of bone. Its ample halls have hosted Quito’s most sumptuous social gatherings. Half the building currently hosts the Archbishop ́s Palace Alley, a small commercial area of restaurants and handicrafts stores.

The Metropolitan Cathedral, the highest ranking catholic temple in the country, is on the Plaza’s south side. Its architecture includes mudéjar features in its pillars, arches and cedarwood coffered ceiling, an echo of Spain’s Moorish heritage. Gothic architecture, on the other hand, can be noted in its pointed arches, transept naves and the circulation area surrounding the main altar. 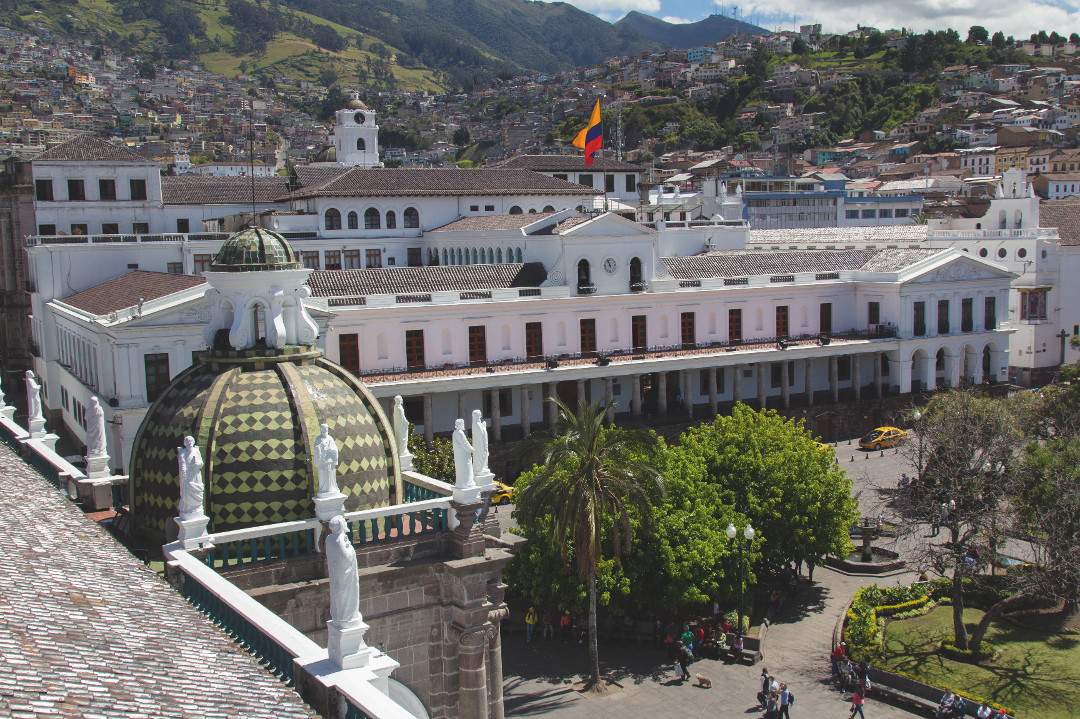 Several chapels can be seen along the wall of the right hand nave. The famous Calvary sculpture is in one of the chapels, among other pieces of high religious worth. The temple houses mausoleums of distinguished historical figures such as Marshal Sucre, the military leader in the war of independence, and former presidents Flores and García Moreno.

An iron wind vane in the shape of a rooster stands at the top of one of the Cathedral’s domes. Over the years it has become one of its distinct features and also the topic of multiple legends handed down the generations.

Beyond the political, religious and historic dimensions of the Plaza, visitors can feel the weight of tradition in its stones and walls and carved wood. The stone benches invite pedestrians to sit down, relax and remember stories under the shade of hundred year old trees. The population of the Plaza is heterogeneous, public employees, merchants, artisans, street musicians, peddlers and tourists. They jointly create a unique type of energy felt only in Independence Plaza.

Daily life in Quito passes by while hundreds of tourists from all corners of the world, impressed by the Plaza’s beauty, take photographs to remember, and to show their friends, the marvelous sights in Quito, a city designated by the United Nations as a World Heritage Site.