One of the best in the colonial downtown 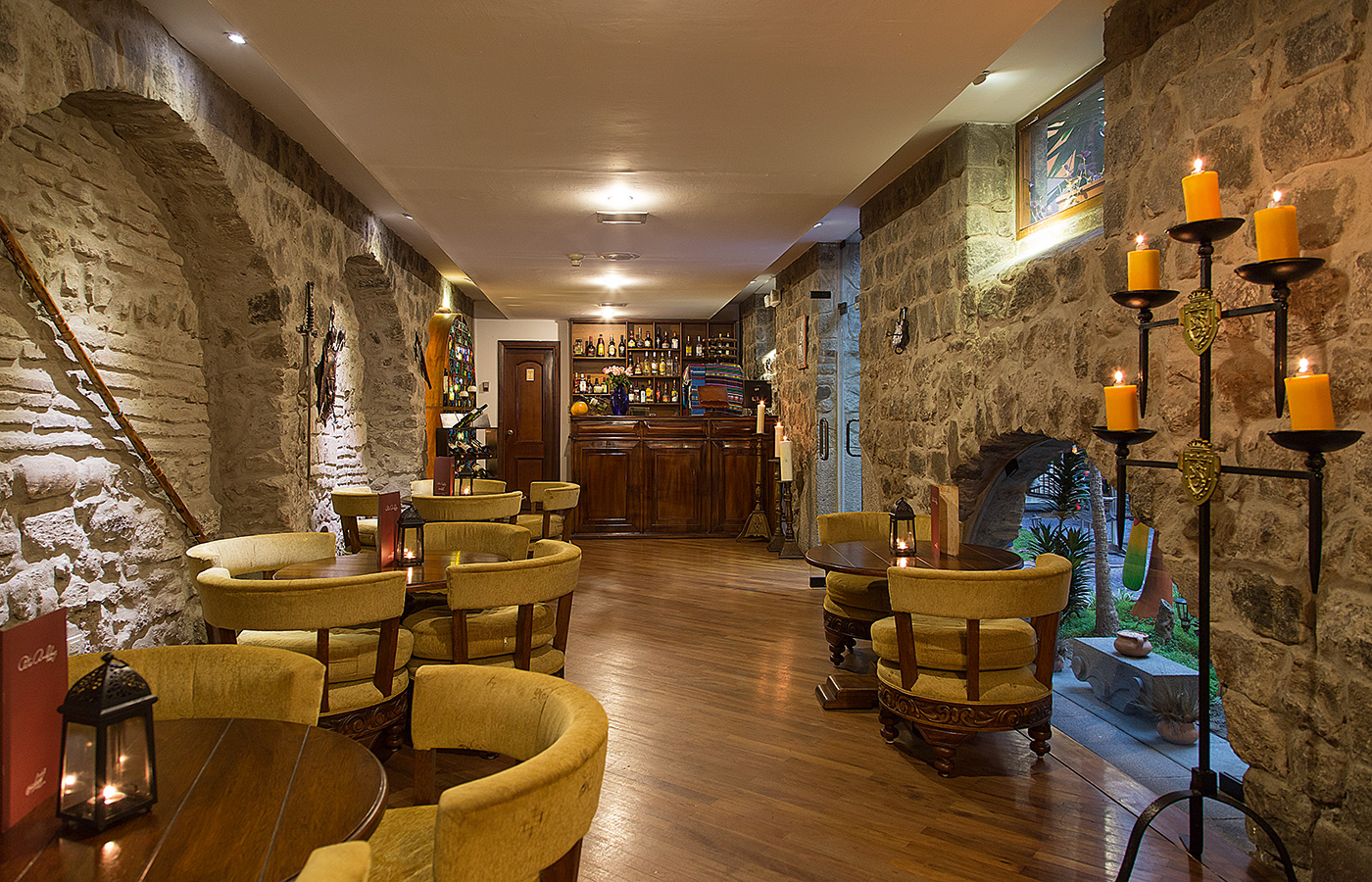 A calm and peaceful environment surrounds a colonial house that recalls Quito´s noble and ancient traditions. But, it’s not just another house, it’s a hotel that caters to tourists with high lodging standards, but who, above all, seek to discover the secrets hidden in every corner of Quito´s colonial downtown.

Patio Andaluz Boutique Hotel is strategically located on García Moreno Street, between Olmedo and Mejía, near the Plaza de la Independencia, the Presidential Palace and the main Cathedral, yet far enough from the hustle and bustle of their traffic and pedestrians. The Cadisan parking building is only a few steps away so the access to the hotel is easy. Once there, in a place where time seems to have stopped, guests can feel how Quito´s founding families lived. A central patio, as in olden times, is now the restaurant Rincón de Cantuña. Chef Pablo Almeida explains that patrons can savor traditional Ecuadorean cuisine, as well as some Spanish delicacies.

Ecuadorean folklore is present in this patio that is the heart and soul of Patio Andaluz. A dancer who embodies the Corpus Christi festivities welcomes diners, alongside the figures of “otavaleña” women, dressed in their traditional indigenous wardrobes. Each detail reflects a philosophy: to make foreigners and locals feel they are in Ecuador, in a country that is concerned with the environment and that has placed its bet on sustainable tourism.

In the restaurant Rincón de Cantuña, patrons can savor traditional Ecuadorean cuisine, as well as some Spanish delicacies.

Patio Andaluz Boutique Hotel is fully committed to sound environmental policies, a “must” topic when talking today about lodging policies. That´s why Jose Luis Álvarez, Chairman of the Board of Cialcotel, a chain of Ecuadorean boutique hotels including Patio Andaluz, states that, “Our strong commitment to the environment and the community have earned us multiple awards, among them the Municipality´s Environmental Award.”

The hotel meets the standards set by the Rain Forest Alliance regarding protection of wildlife, water conservation and the welfare of employees and local communities. In fact, every new employee in Patio Andaluz must sign a formal commitment to sustainable tourism, which states that all employees, regardless of their position in the company, are aware of the leading role their hotel plays in the protection of the environment. Most of the products used in the hotel are organic. 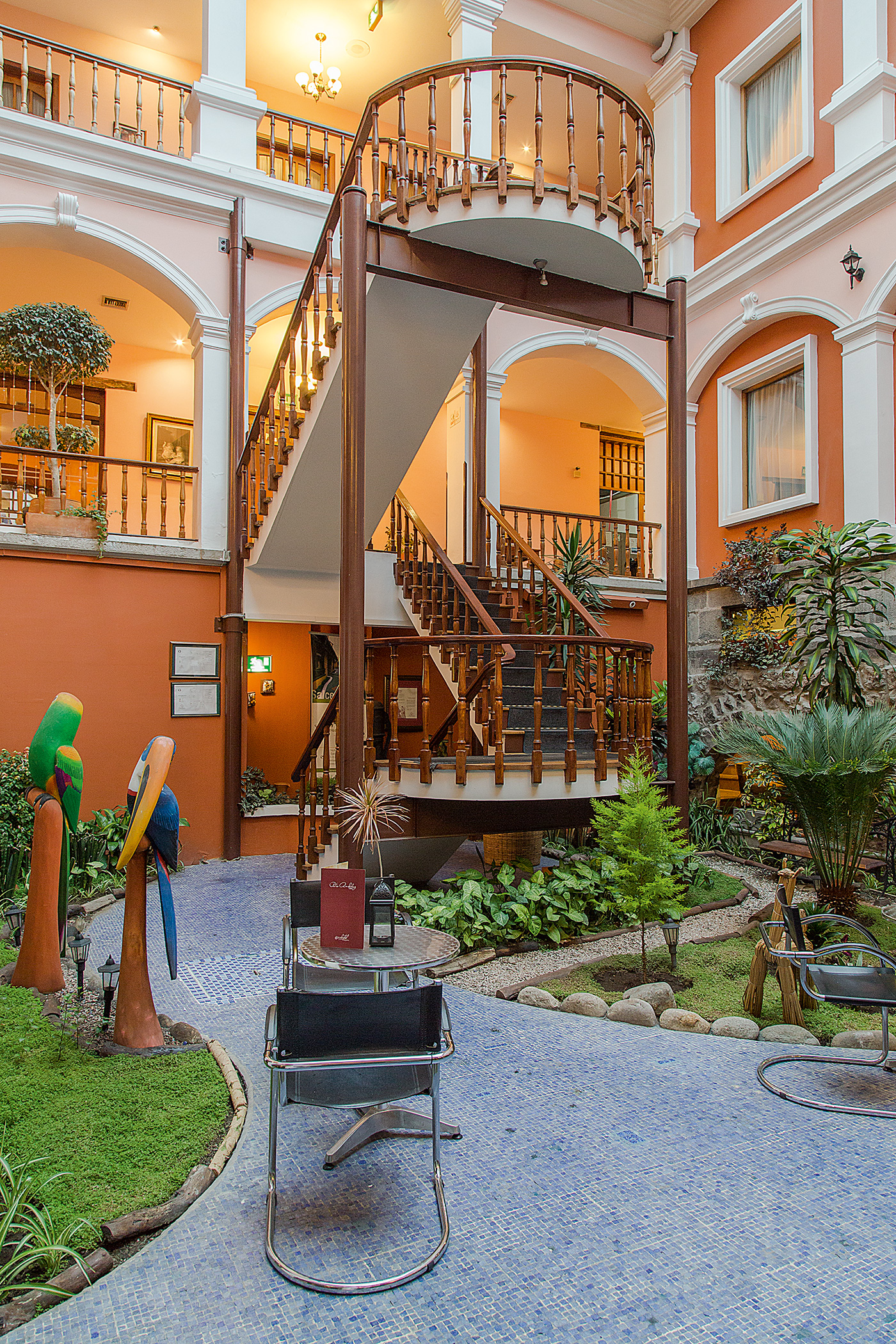 Moreover, suppliers are also required to meet all environmental and legal norms.

The historical importance of the locale that houses Patio Andaluz must be highlighted. The plot of land itself dates back to the foundation of Quito in 1534. By the end of the 16th century, the property belonged to Juan Sánchez de Jerez, an active participant in the so called “alcabala” tax revolt. Over the years, the house had successive owners until, during the Republican period after independence from Spain, it was acquired by Pacífico Chiriboga Borja, a well-known politician from the city of Riobamba. Upon his death in 1866, the house was inherited by his daughter Mercedes, wife of Colonel Timoleón Tiburcio Flores, a son of General Juan José Flores, Ecuador´s first President.

Two generations later, two Flores brothers who had inherited the house sold it in 1924. Eventually, it came to be part of the real estate portfolio of Quito´s Colonial Downtown Corporation. Under its supervision, the property was reconstructed and turned into a hotel, part of the Cialcotel chain of boutique hotels founded by José Luis Alvarez in 2003. The hotel opened in January 2004.

Besides being a landmark, Patio Andaluz offers its guests some very special rooms, among them, the Cava Marqués de Jerez to taste vintage wines, or the Guayasamín reading room to choose amongst its history books. The hotel’s 32 rooms, including 11 suites, provide luxury and comfort to guests who wish to spend a night in Quito’s colonial heritage. The Tienda del Patio sells a wide selection of local handicrafts that make very suitable souvenirs.