Quito´s most privileged view is from the overlook at the base of the statue of the Virgin on El Panecillo hill. Visitors enjoy a magnificent sight of central and southern Quito. Looking towards the colonial downtown, the colorful cupolas of multiple colonial churches can be appreciated as well as the russet hues of the tiled roofs of other buildings. On a clear day, tourists can see several snow capped volcanos of the Andes mountain range. 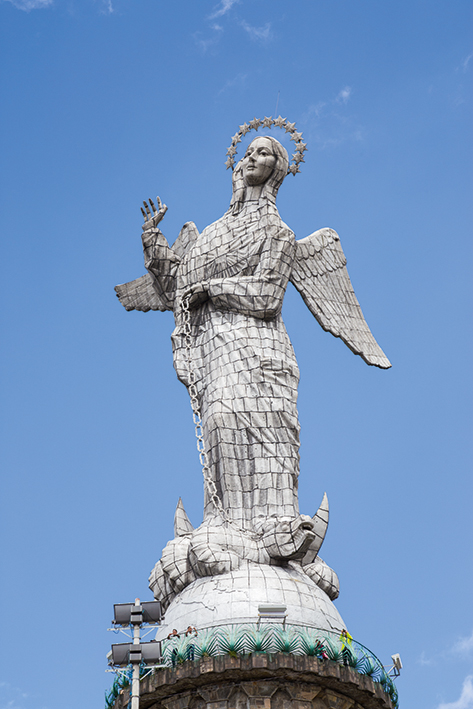 Several decades ago, El Panecillo hill was the southern border of Quito´s urban area. Today, as Quito has grown, the statue of the Virgin actually shows its back to Quito´s southern neighborhoods. Standing on El Panecillo, a visitor can perceive Quito´s growth pattern over the course of the past century.

The top of El Panecillo hill is some 3.000 meters (9.800 feet) above sea level. Its name dates back to colonial times when many of its citizens felt it actually looked like a small loaf of bread. “Pan” means bread, and “illo” is the diminutive form. In Quito´s early days, a military fort was built on El Panecillo for the city´s protection. 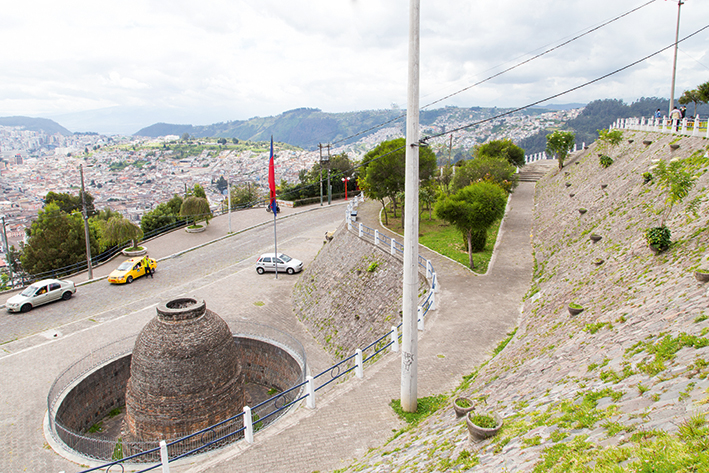 The fort was a key participant during the upheavals at the time of Quito´s first attempt at independence from Spain in 1809 and again during the final battle of the war of independence in 1822. Afterwards, the fort lost is military significance and became just a lookout for Quito´s citizens and visitors.

Today El Panecillo is a must see tourist stop. Besides the stupendous views, visitors can appreciate the statue of the Virgin located on the top of the hill, a statue considered to be an architectural and artistic masterpiece. And, if this weren´t enough, it´s also a great place to enjoy a cup of coffee or a complete meal. 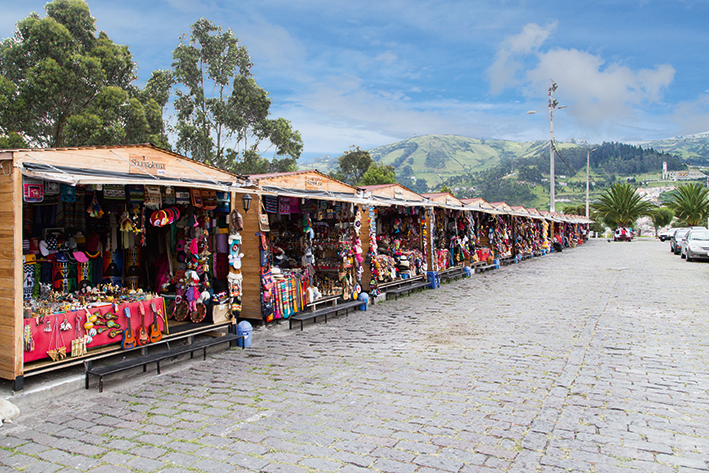 The statue is a mosaic of some seven thousand pieces of aluminum and other metals, a perfect replica of a statue by Bernardo de Legarda, a sculptor from the “Quiteño” school, kept in the altar of San Francisco church. The statue on El Panecillo is 30 meters (98 feet) high and it was unveiled in 1975. Above a concrete base covered with volcanic rock, the Virgin stands on globe with a serpent chained to her feet. This Virgin sprouts wings and alludes to the Apocalypse Virgin mentioned in the Bible. A plaque on the base reads, “The Woman of the Apocalypse Chapter 12…”

The task of building this statue of the Virgin on the highest point in Quito was entrusted to Father Julio María Matovelle in the latter years of the 19th century. This task took almost a century. Father Matovelle was also responsible in 1883 for undertaking the building of the Basilica of the National Vow. 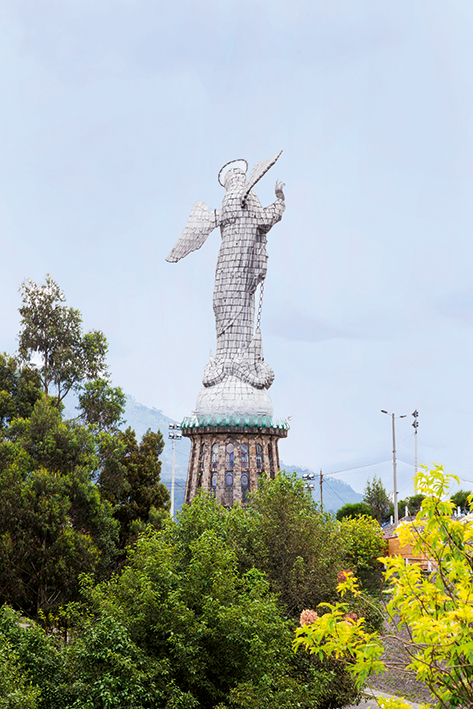 Inside the monument, on the way to the lookout that is about 11 meters (36 feet) above the base of the statue, there is a small museum that narrates the history of El Panecillo and details how the Virgin was built. Some tourists may feel vertigo walking up to the lookout but, if the view from the hill is beautiful, the 180 degree panorama from the lookout is stupendous. Certainly it´s well worth any short dizziness.

El Panecillo can be visited in the daytime or at night. The two experiences are completely different. If it´s mainly a sightseeing stop to walk up to the lookout and visit the museum, then it´s a day trip between 9 a.m. and 5 p.m., including weekends. Entrance fee is $2 dollars and guides escort tourists up to the lookout. Inside the museum there is a coffee shop and a handicrafts shop. 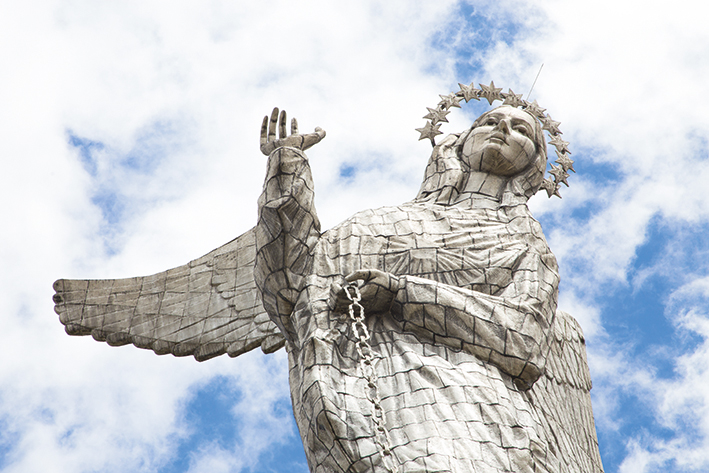 To gaze at Quito at night, particularly the brightly light church cupolas, is quite a spectacle. The Municipality has been making considerable efforts to improve the neighborhood of El Panecillo, making it more attractive and safer for “quiteños” as well as foreigners. Community police stations have been established to ensure visitors´ safety. The neighborhood offers traditional ecuadorean food and numerous handicrafts stands. El Panecillo must be experienced as one of Quito´s seven marvels.