André Breton, the French poet, once said that Latin Americans don´t need to invent surrealism because we live within it every day. In Cuenca, a city that lives with sober tones and restrained behavior, there comes a time of the year when we abandon all bashfulness and become completely festive beings, in order to welcome the birth of the most beloved Baby in Catholicism. The timid devotion demonstrated in our temples becomes a multihued love feast.

The Traveler Baby has arrived! Those were the words of Rosa Palomeque when she saw Monsignor Miguel Cordero arrive, in 1961, with a sculpture of Baby Jesus that had traveled to the most significant spots in the Catholic world, the Holy Land and then the Vatican, where it had been blessed by Pope John XXIII. That year, Cuenca´s most important religious tradition got started and, since then, it´s been celebrated every 24th of December.

Saint Francis of Assisi was allegedly the first to build a manger to celebrate the birth of Baby Jesus. His creation became a sturdy custom in the Catholic community. However, it´s unlikely he could have ever conceived of a traveling manger, much less in America. 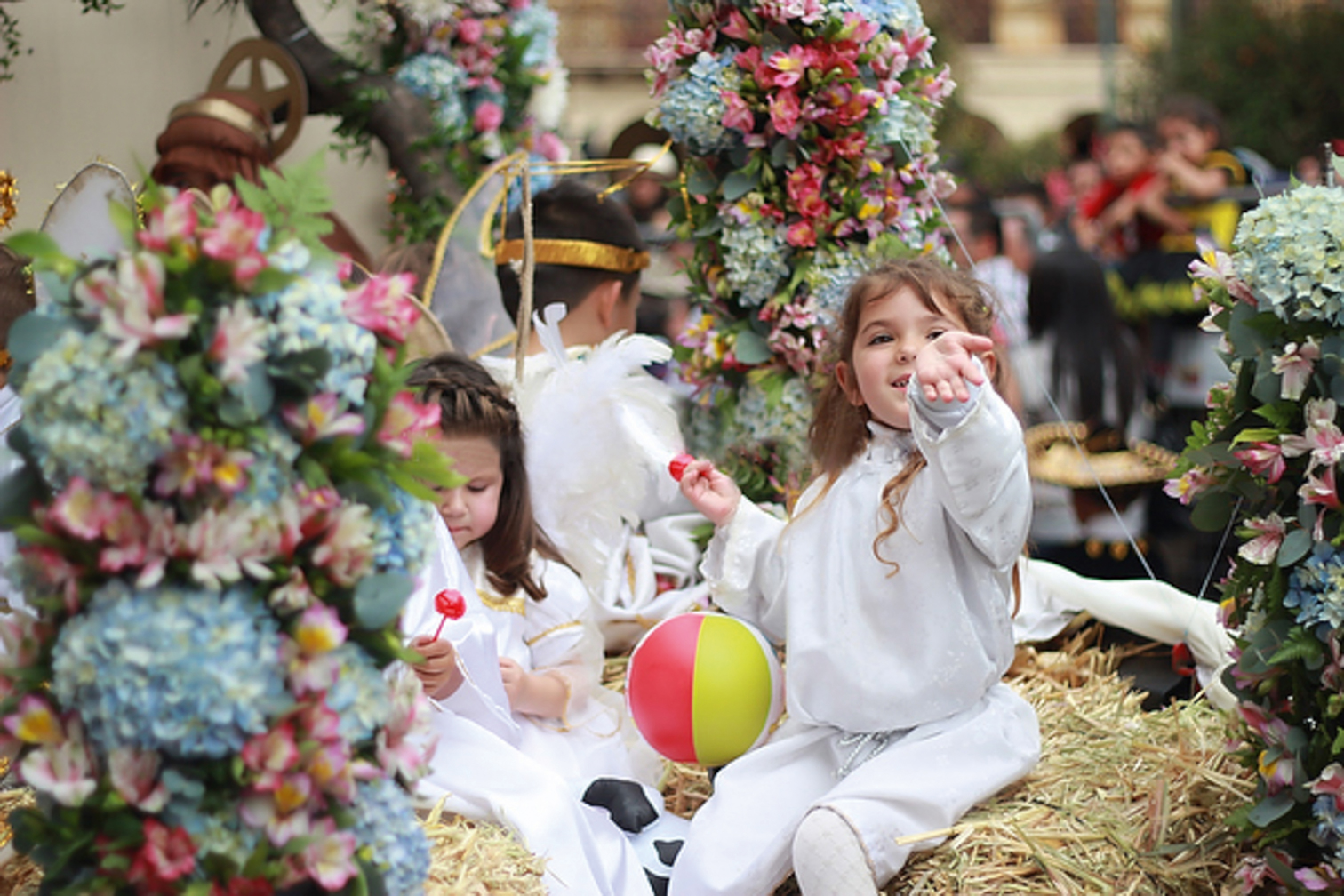 The Walk of the Traveler Baby is organized three months ahead by the priostes, the butlers of the religious brotherhoods, who work full time to prepare an event that attracts some forty thousand people. Half of them parade in costume, ready to escort the Traveler Baby during his entire walk. Rosa Palomeque, the lady who christened the Traveler Baby, became the first manager of this celebration and remained until her death in 2007. Her daughter succeeded her and, later, her granddaughter. 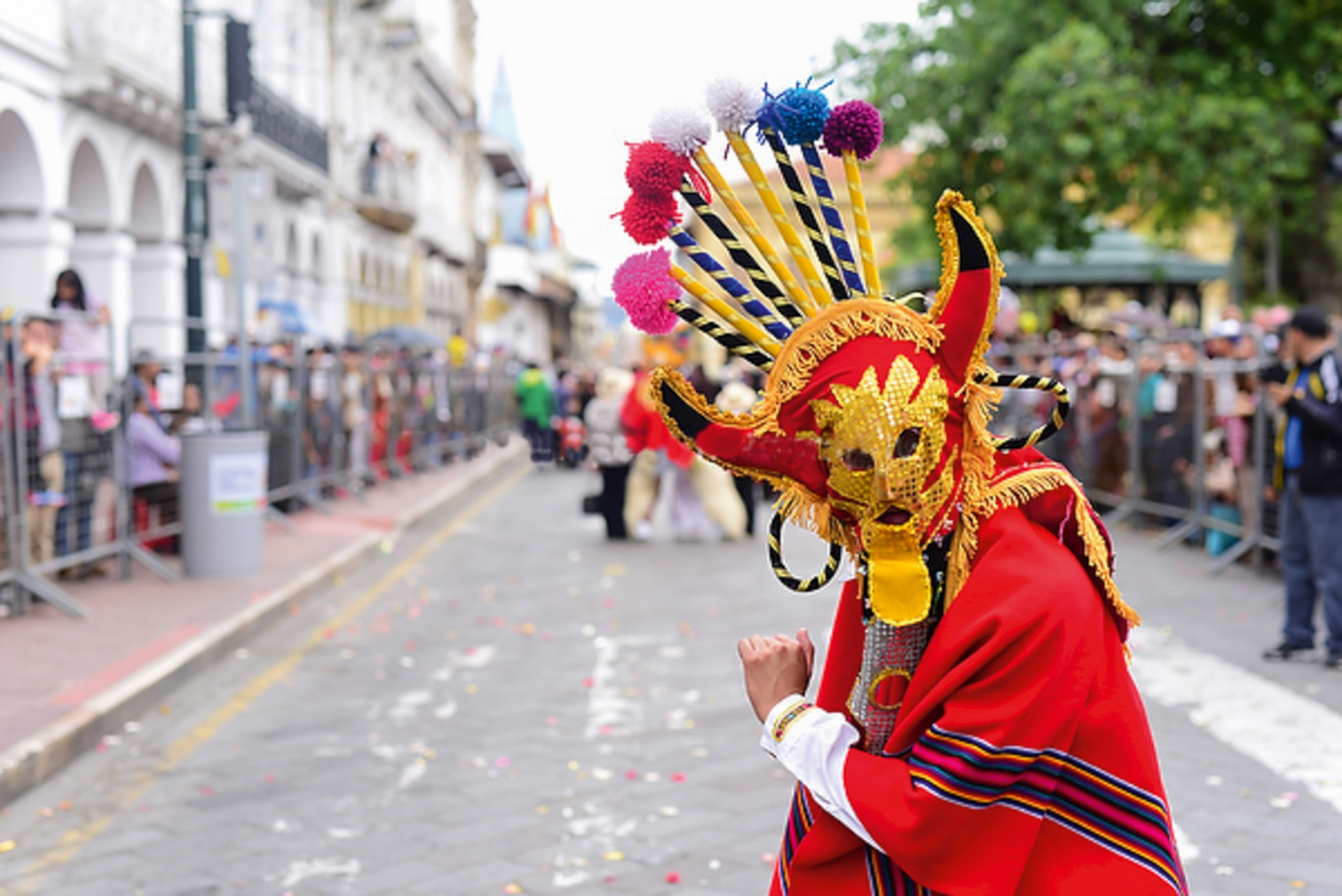 The Walk is designed so all neighborhoods of Cuenca and nearby towns participate. Particularly, the children who dress up as shepherds and carry their offerings. Among the participants are gypsies, biblical characters, otavaleño and saraguro Indians in their customary outfits, hacienda foremen on horses, red crested roosters with red peppers hanging from their beaks, fruit castles atop floats dressed with bright colored blankets so dazzling they can be seen from one block away. Over a three hundred foot stretch, dozens of families march together, dressed up in accordance with the mood and in sync with the rhythm. 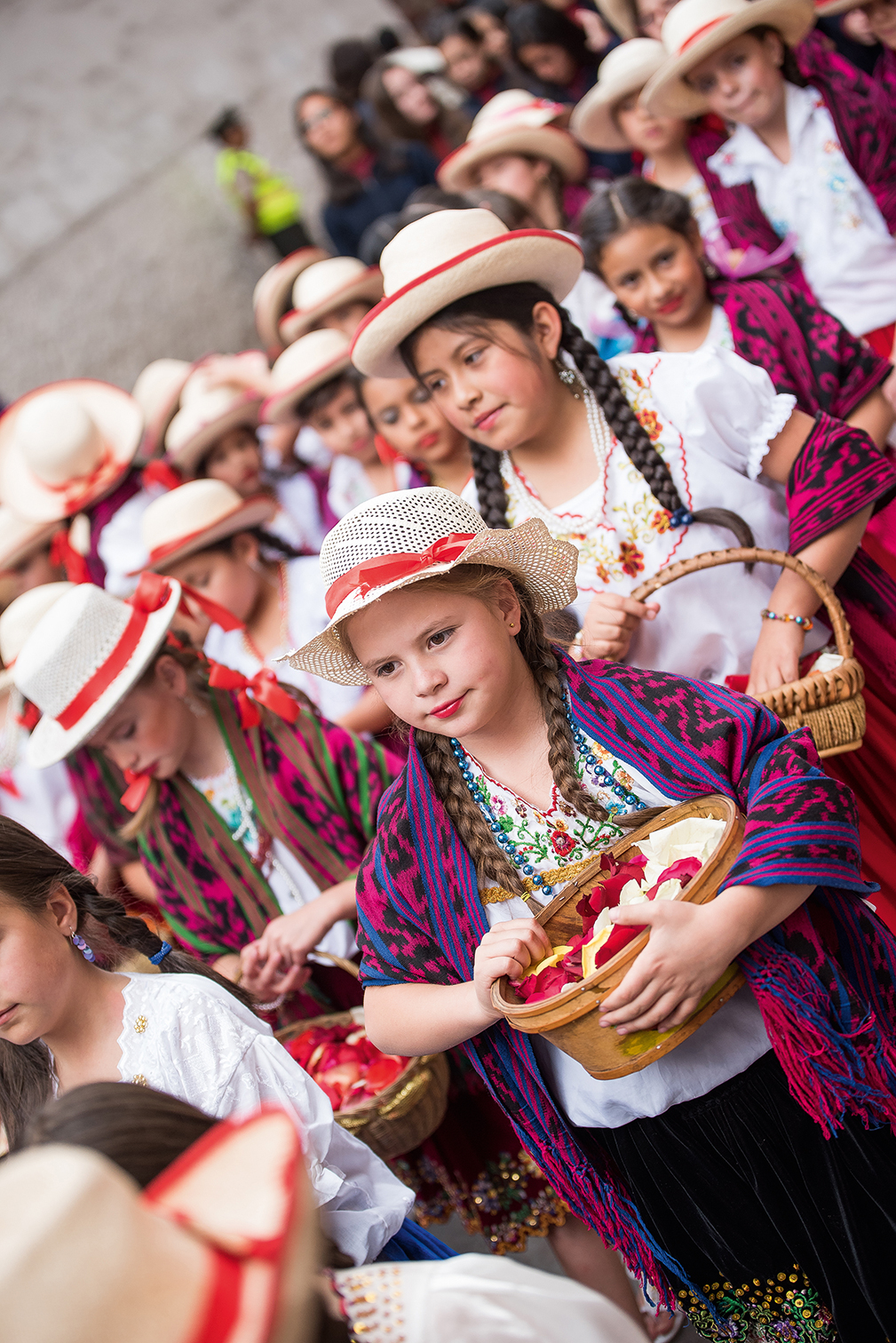 For over fifty years, Cuenca has kept this tradition, unique in the world, a fact that has attracted tens of thousands of visitors. They have come to be a part of the Walk, even more so by wearing a costume. It is such an impressive spectacle, with so much color, so many textures and shapes, such ancient scents of incense and myrrh, such sweet carols played by village bands, so many children dressed in bright robes and sandals, either with or without wings. Everybody in motion, organized chaos, dissimilar sounds in harmony, whirlwinds of light converted into colors. 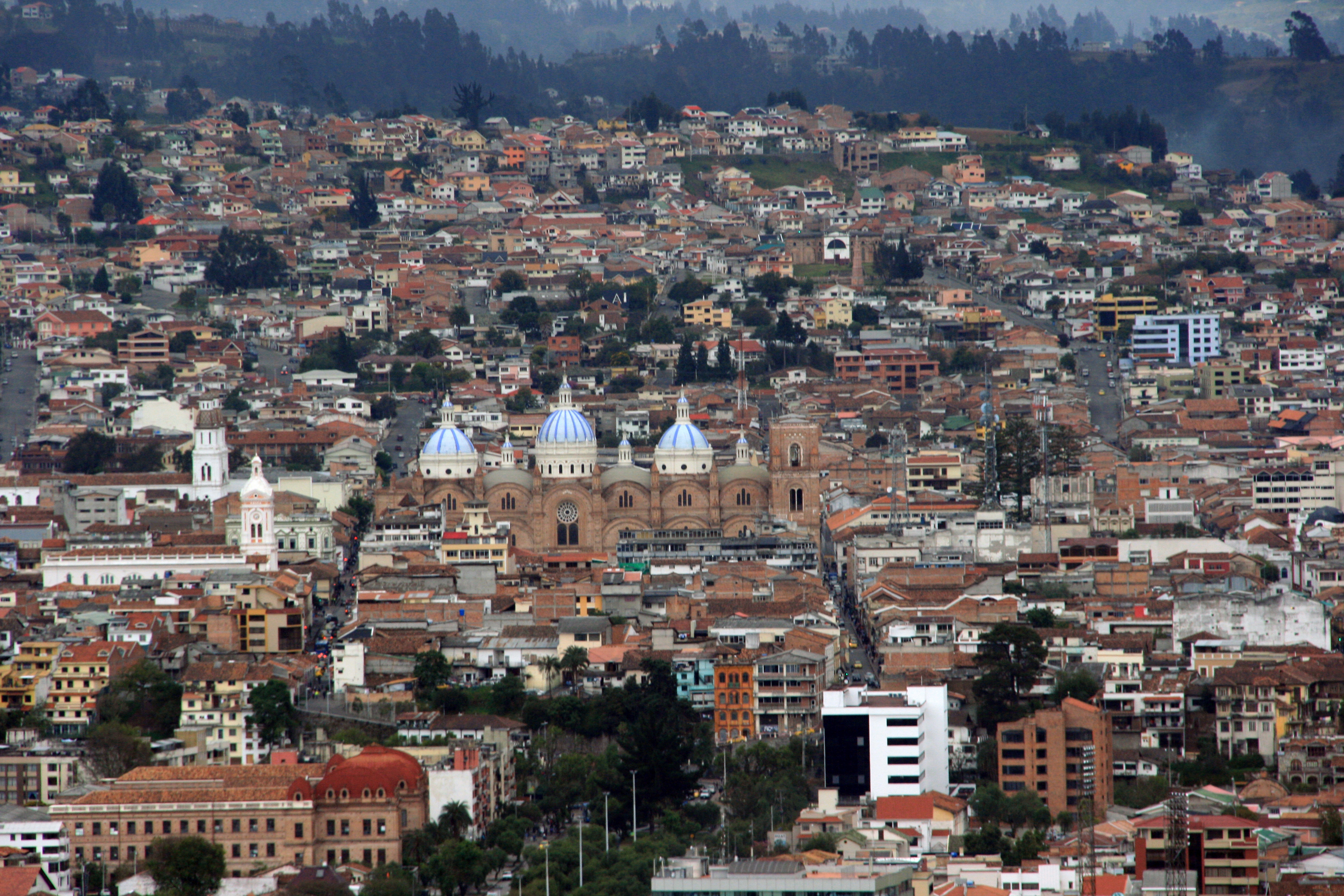 The Spanish conquistadors imposed upon the Andean peoples their beliefs and their rites. However, in order to ensure their permanence, they had to allow them to merge with practices of those conquered communities. The Walk of the Traveler Baby is a clear example of the juxtaposition of our Spanish heritage with our Andean roots. The concept of the manger was part of the Spanish mindset, but the people who actually created the celebration added symbols taken from indigenous customs. This is cultural syncretism, a sociologist would say, a merger of pre-Columbian cultures with Spanish Catholic rites, adding in the process new meaning to each character and to every ritual. For the worshippers, it´s not so complicated. It´s just a day when they can express their faith by acting as somebody else, a day when all their devotion is channeled into dancing and singing, eating and drinking. All their feelings converted into a feast, in anticipation of Jesus´ birth. 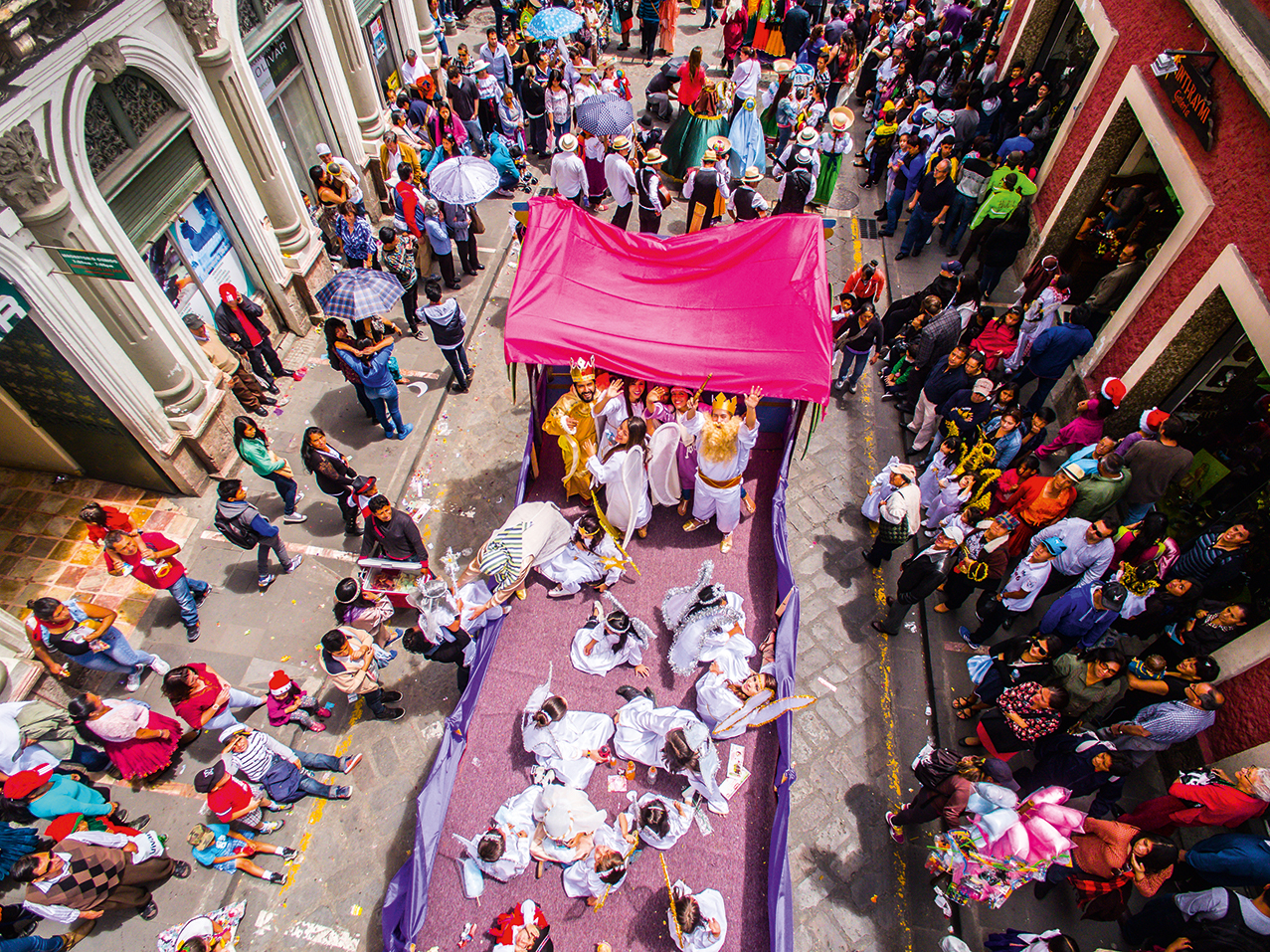 As in all rituals, some characters stand out. An Angel leads the procession, simulating a star guiding the Magi and the shepherds towards Baby Jesus, who is represented by a small boy dressed in a white robe, wearing a golden belt and carrying a wand with a star on its tip. Black characters are children, bodies darkened with lard and soot, eyelids and lips in flaming red. Black dancers wear blouses and skirts in striking colors, red headdresses, enormous earrings and necklaces. Each character gives evidence of diversity, which has been built year on year, such that it no longer matters as much who the character may be. What´s important is to be a participant. 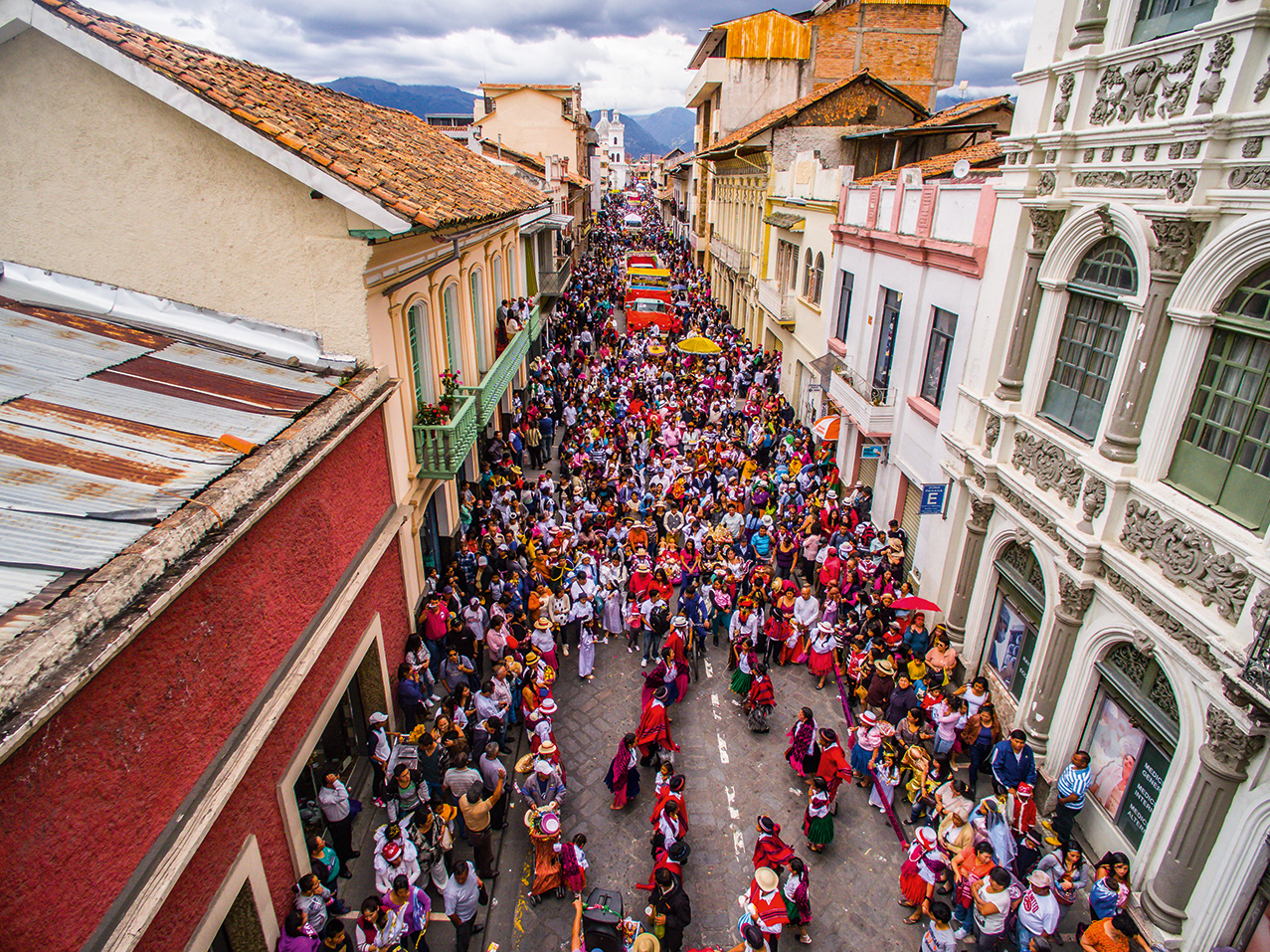 The Mayoral and Mayorala are the symbols of abundance. They parade on horses dressed with colorful ribbons, with bags full of fruits, vegetables and candies. They represent people from neighboring Cañar province. They lead the shepherds who bear offerings for the Traveler Baby. The Mayoral wears black woolen pants, rope soled sandals with red ribbons, a white shirt, a red or black poncho and, on his head, a white woolen hat. Whereas, the Mayorala appears with her hair braided with red ribbons and a pollera (over-skirt) in flaming colors, fully embroidered at the bottom. 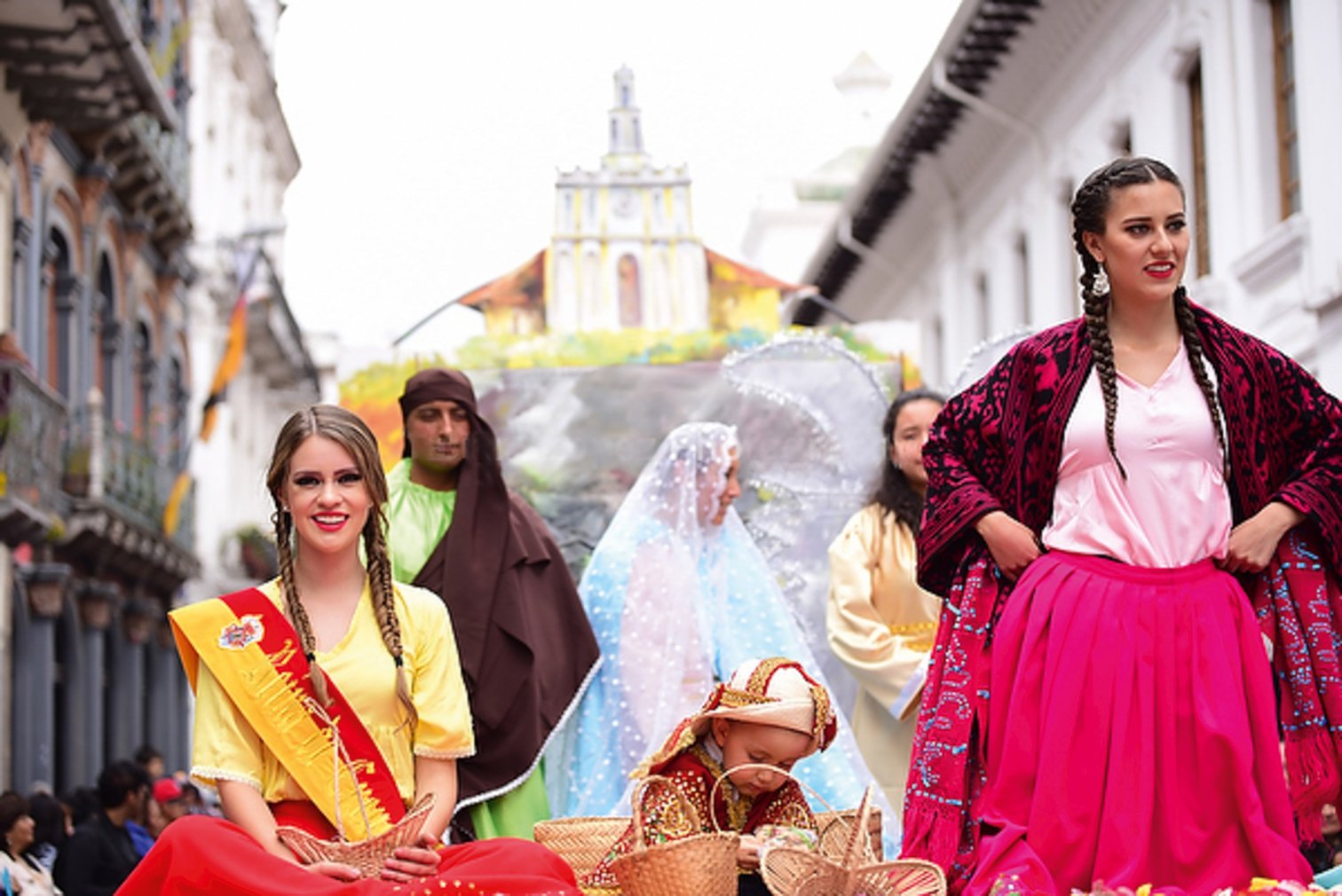 Processions honoring the birth of Jesus exist everywhere. Yet, here in Cuenca, it´s a community affair that involves the entire city. A feast that cannot be conceived without thinking of color, a solemn tradition upheld by the commitment of its devout organizers. It is now an event no longer limited to the faithful, instead, it´s open to all who wish to be a part but, above all, it´s open to everyone willing to feel as one with all the other participants. 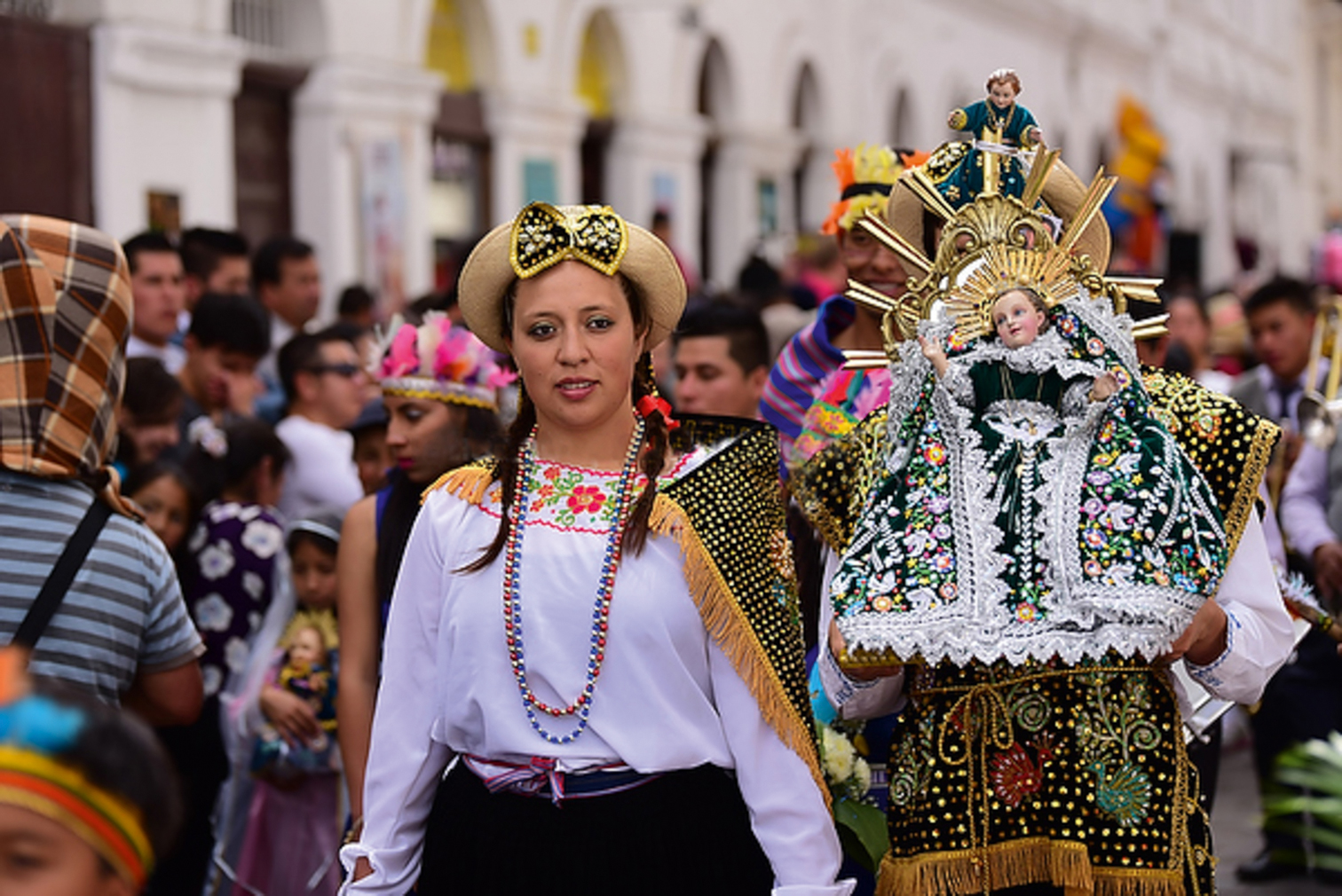