CLAVE! had the privilege of an extensive private tour of the convent, church and museum of Santo Domingo, accompanied by Father Osvaldo Cazorla, who kindly showed us every last detail of these stunning buildings.

The history of the convent goes back to 1541, with the arrival of the first evangelical mission of Dominicans to Quito. They began the long process of founding the structure of what we now know as Santo Domingo. Later, the friars hired Francisco Becerra, a renowned Spanish architect, who made the first adjustments to the original structure. Through the years several more architects were involved, contributing to the final finished convent. 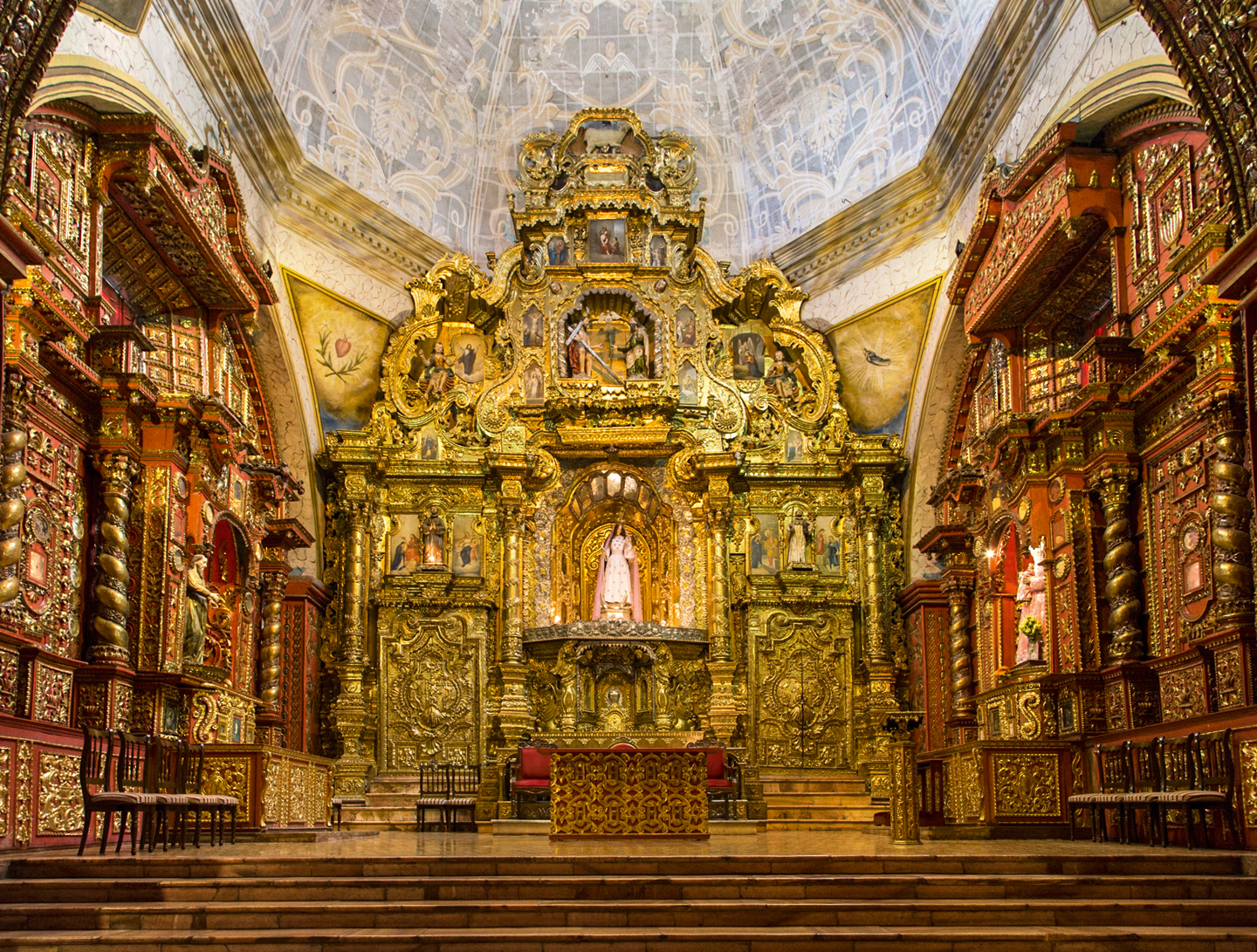 Our tour began with the internal patio, with its typical Spanish design, complete with a water feature surrounded by tall palm trees and lush gardens. It was here that, in 1688, the “San Fernando” school was founded, a renowned Quito institution that counts among its alumni important local figures such as Eugenio Espejo, José Joaquín de Olmedo, Vicente Rocafuerte and Gabriel García Moreno. “The convent of Santo Domingo was a great emporium of study,” explains Father Osvaldo. 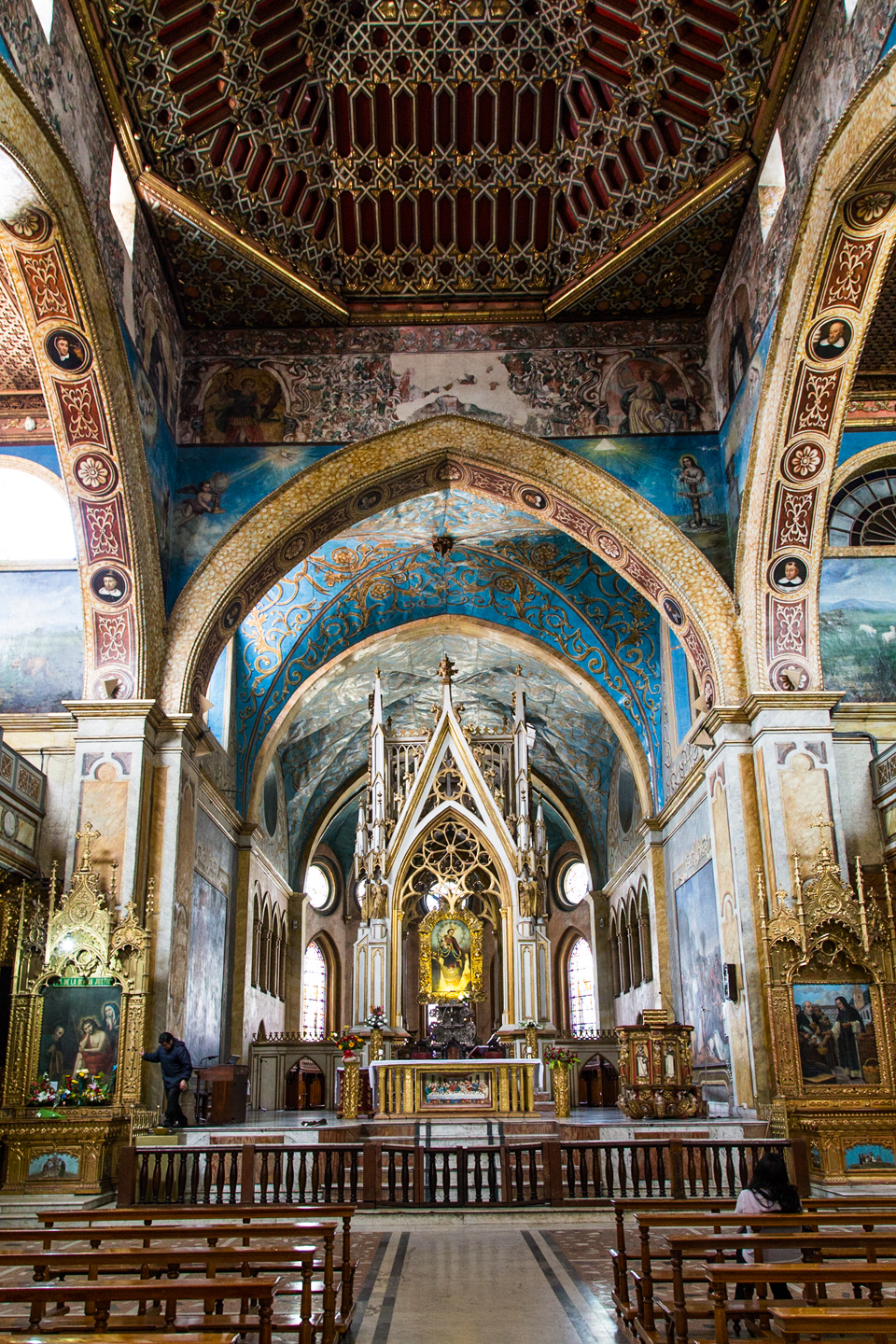 Winding our way through the labyrinth of internal corridors of the convent, we arrive at the library. This magnificent place is home to various invaluable treasures and relics, containing approximately 60,000 volumes that are carefully organized on long wooden shelves. Most are written in Latin and Greek, and were brought from Europe many years ago. Some of them, according to Father Osvaldo, are some of the first ever printed. This highlights two important founding principles of the religious practice of the Dominican friars: intellectuality and preaching. 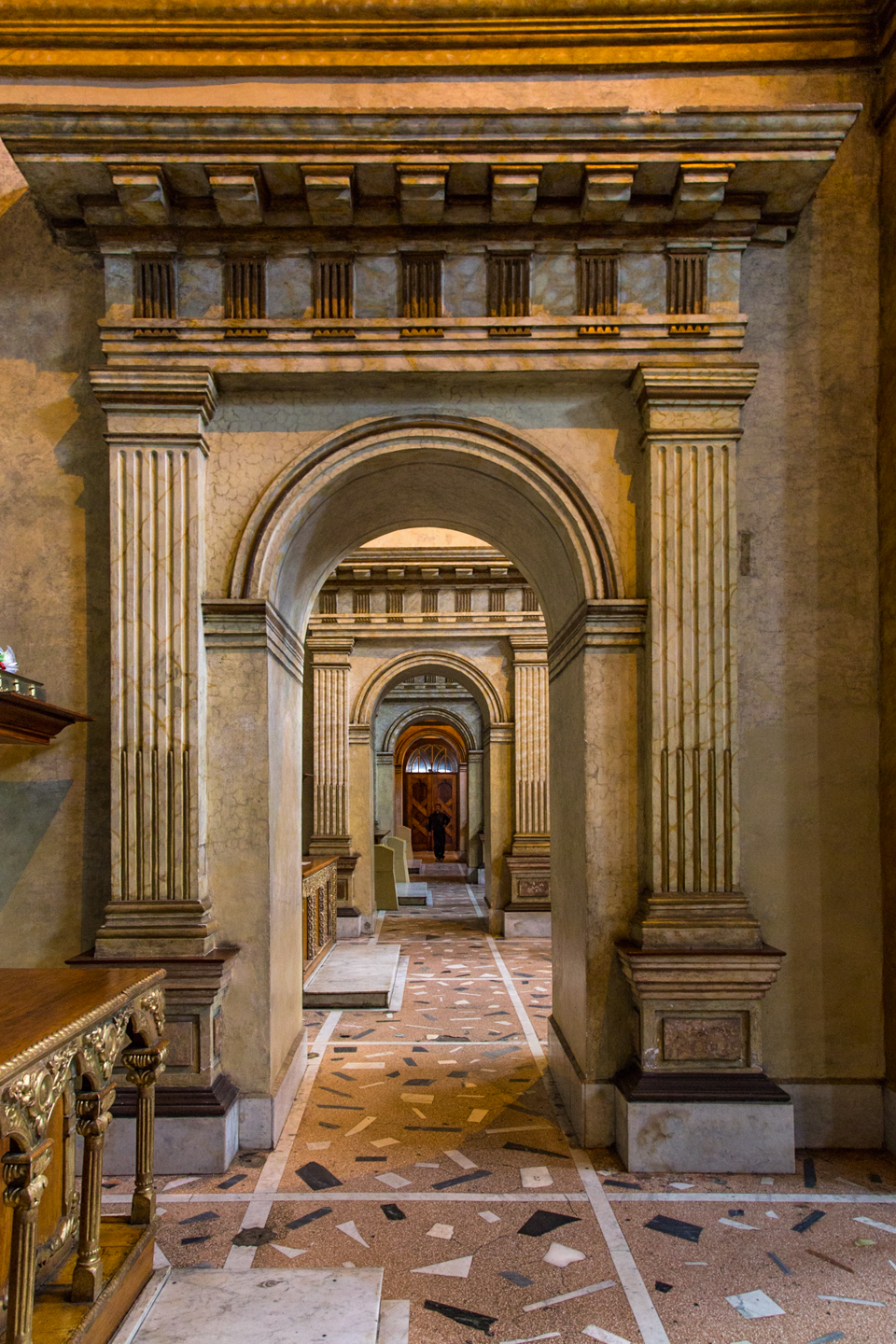 We continued our tour, stopping at the anteroom of the dining room. This was where more than 100 friars used to gather to pray and bless food before eating, with a striking picture of Our Lady of the Rosary hanging on the wall, keeping watch over them. 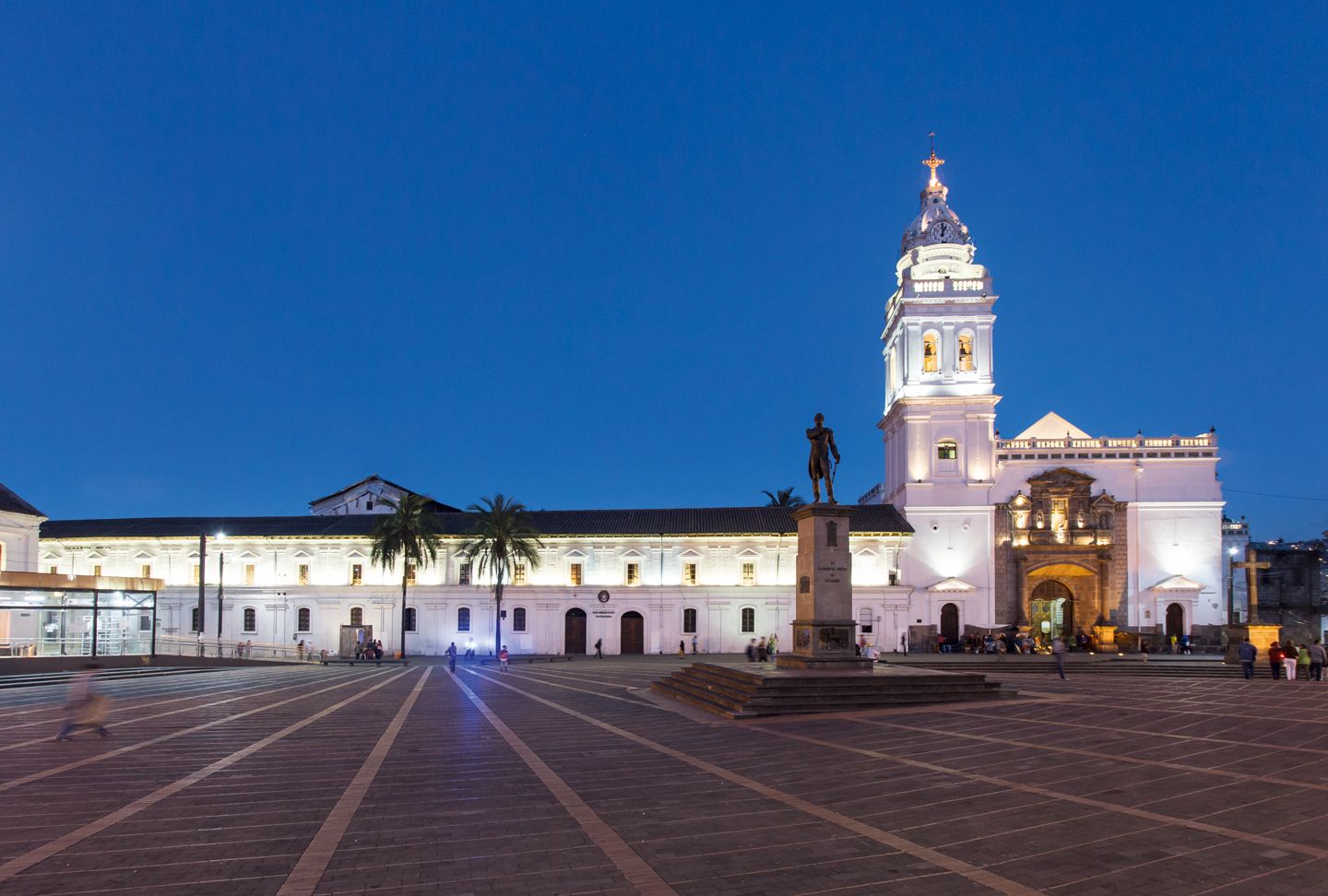 Father Osvaldo opened the doors to enter the refectory: the grandiose scale of the room immediately captured our full attention. The coffered ceiling is made up of detailed figures carved in gold and images depicting the life of St. Catherine of Siena. On the wall to one side are the paintings that show the martyrdoms that some of the preachers of the Dominican order received.

At the far end of this immense hall sit several wooden benches with high polychrome reliefs on the back, representing several saints, in which the friars would sit to have lunch. On one of the walls is a painting of the Virgin of the Flowers, bearing the signature of Miguel de Santiago, an important painter of the Quito school of Art. Nowadays this grand room is mainly used for events and receptions. 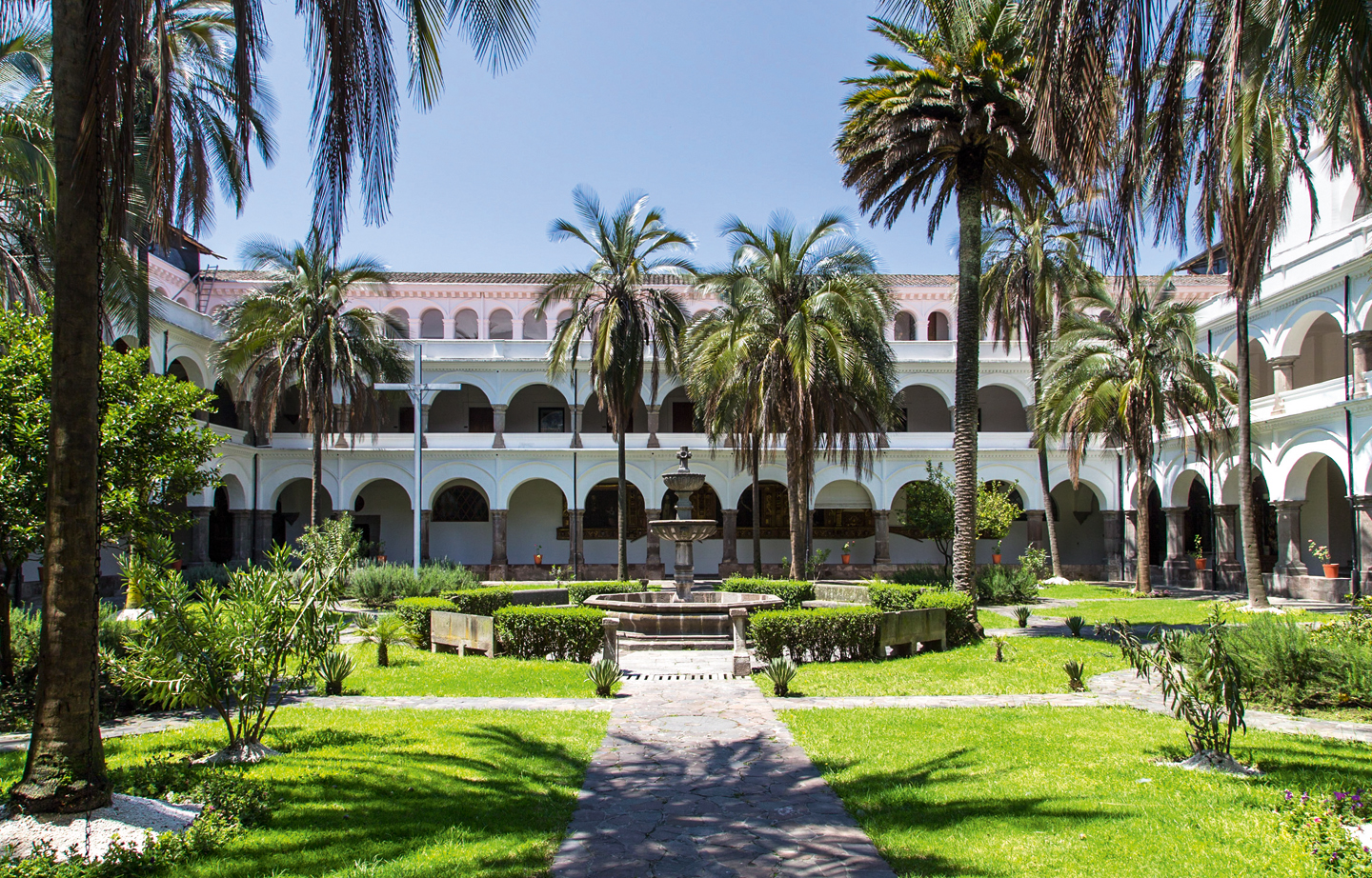 Within the convent is the Chapel of Pompeii, decorated and named in honor of the Virgin of Pompeii. The importance of this space lies in its use for the ordainment of priests and deacon, as well as for the conduct of solemn masses. The chapel is also open to the public for baptisms and marriages. 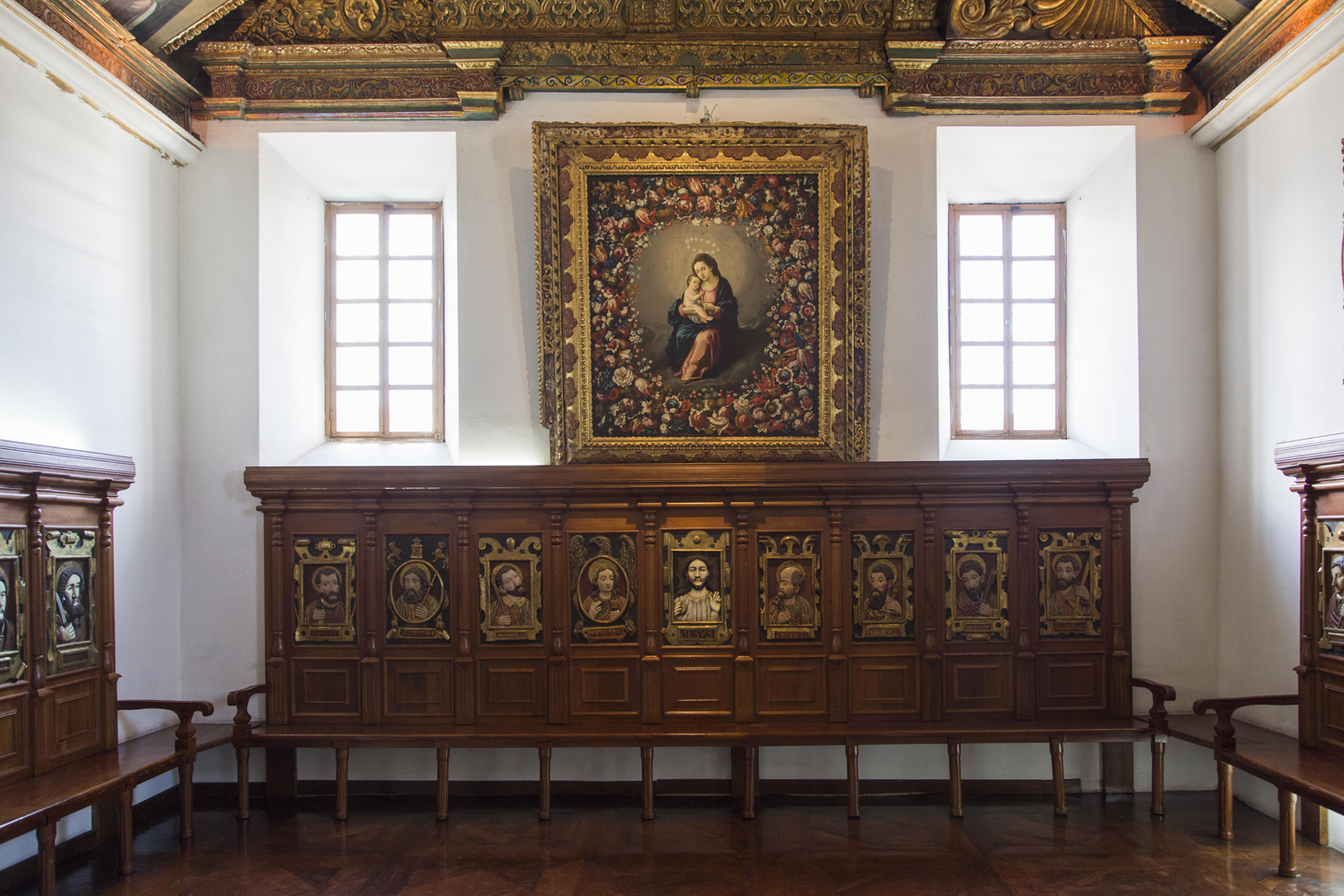 To walk these halls is to travel back in time and space, to bygone eras where each brother left their mark, entrenched in a legacy of valued teachings. Just one example of this was Pedro Bedón, one of the founders of the Quito School of Arts; Bedón is remembered as a staunch defender of human rights, and for his professorship in Quichua. Such was his legacy that the museum within the convent was named after him. 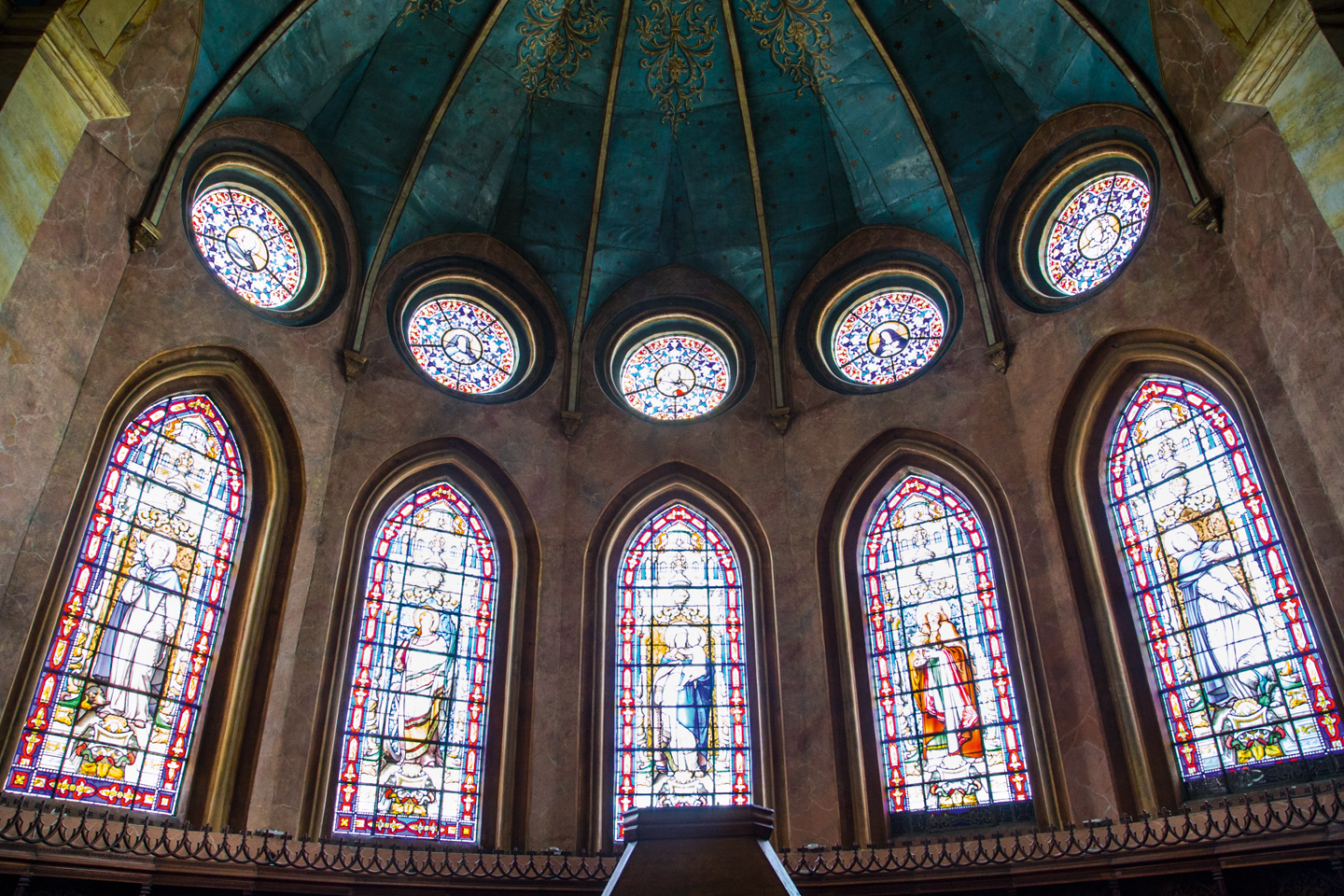 The artistic variety that can be found within the museum is astounding, including works from the 17th to 20th centuries, which reflect the identity of the Dominican brothers and manifest the popular faith that existed at that time. Paintings, choral volumes, ornaments, liturgical dresses, and religious sculptures from Quito, Italy and Spain are just some of the many historical treasures that this museum is home to. The more famous works to be found in the museum include the sculpture of the Child Traveler, the paintings of the Virgin of the Milk, and the Virgin of the Stairs. 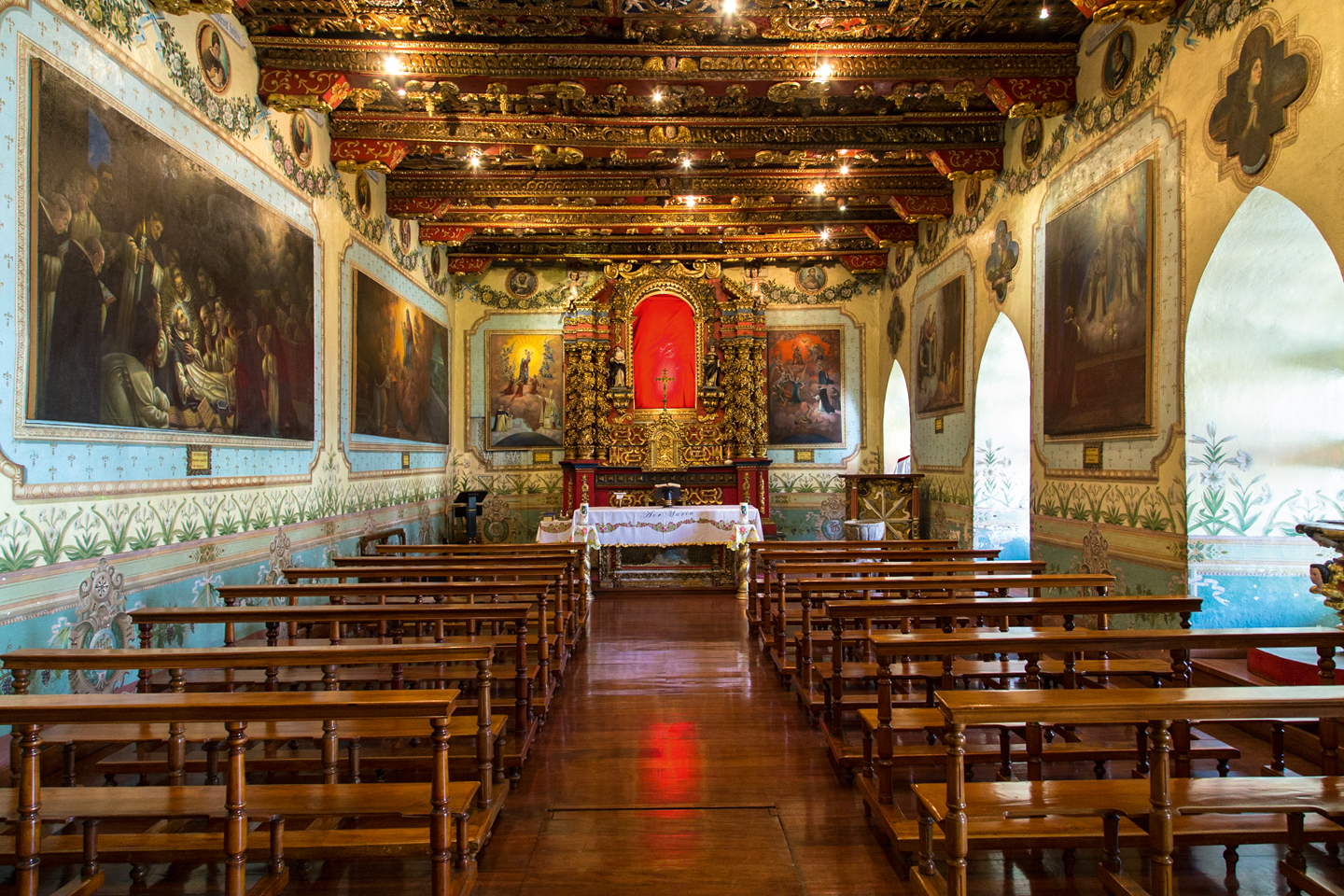 Finally we headed towards the church. Prayers and songs of praise enveloped us in an atmosphere of peaceful contemplation and fervor. Many people from all over the country make their way to worship here, due to their devotion to Saint Judas Tadeo, patron of desperate and impossible causes, and Saint Martin de Porres, patron of social justice and protector of the poor. Works depicting both these hallowed saints are displayed on side altars throughout the church. 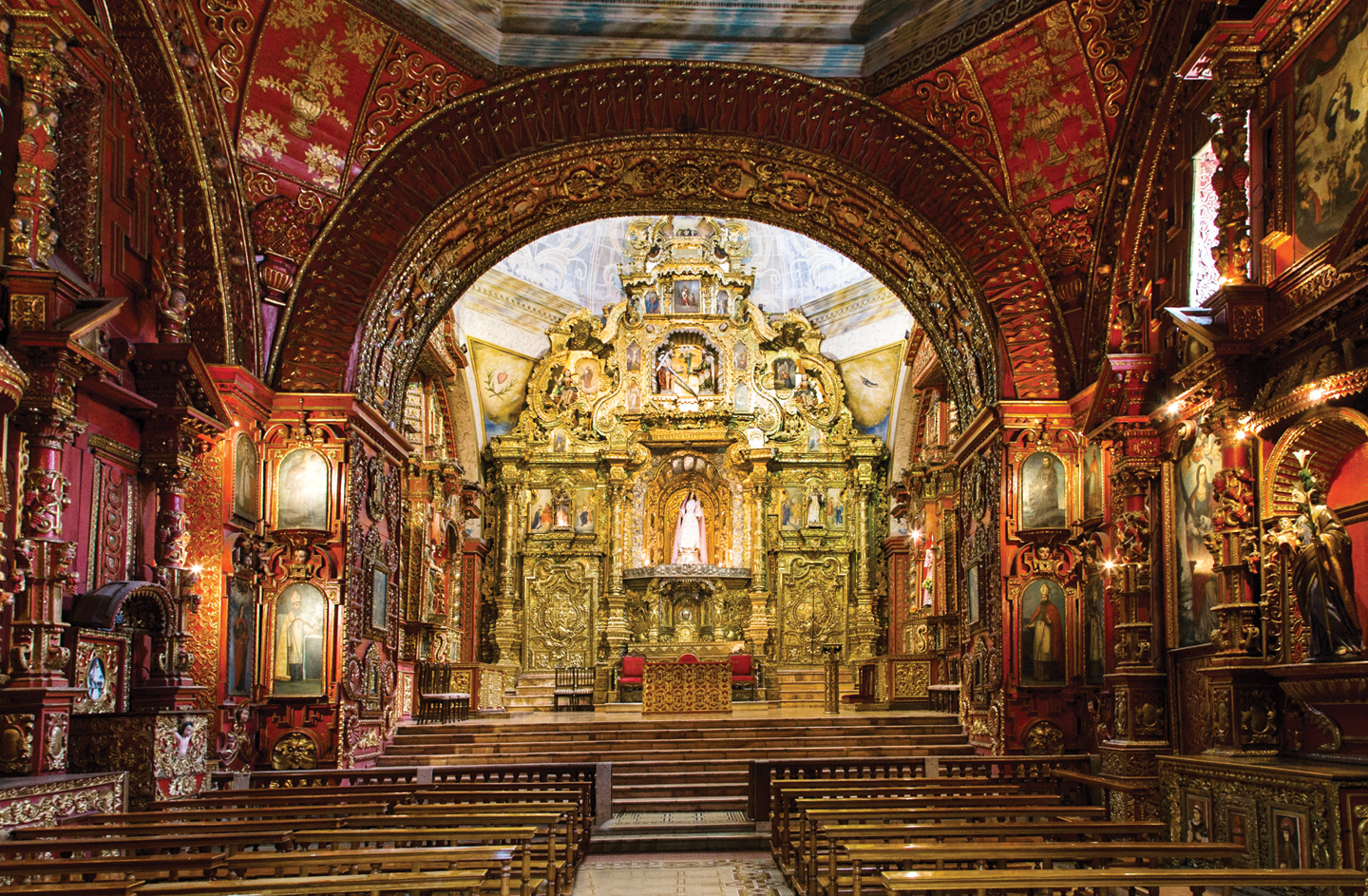 On one side of the central nave is the imposing Chapel of the Rosary, distinguished by its baroque style art. One of the most important and striking works in the Chapel is the statue of the Virgin “del Rosario”, which was a gift from King Charles V of Spain. This chapel is one of the most important architectural gems of the Historical Center of Quito. 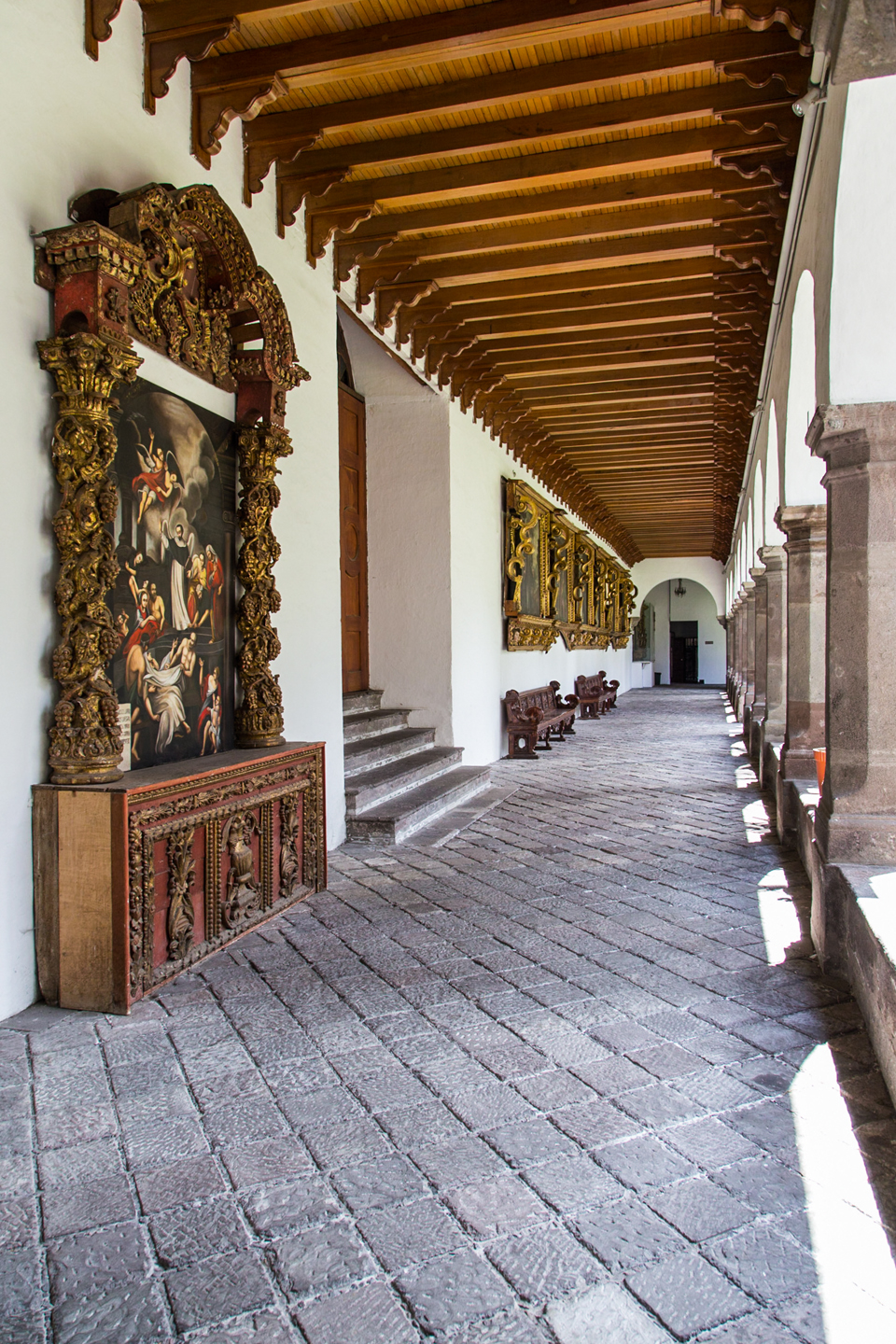 The structure of church itself is impressive, with its awe inspiring colors and stunning 19th century decorative windows brought from France. The light streaming through these windows clearly illuminates the back of the church, achieving a harmonious combination with the wood paneling and the Mudejar -style gold leaf on the ceiling. 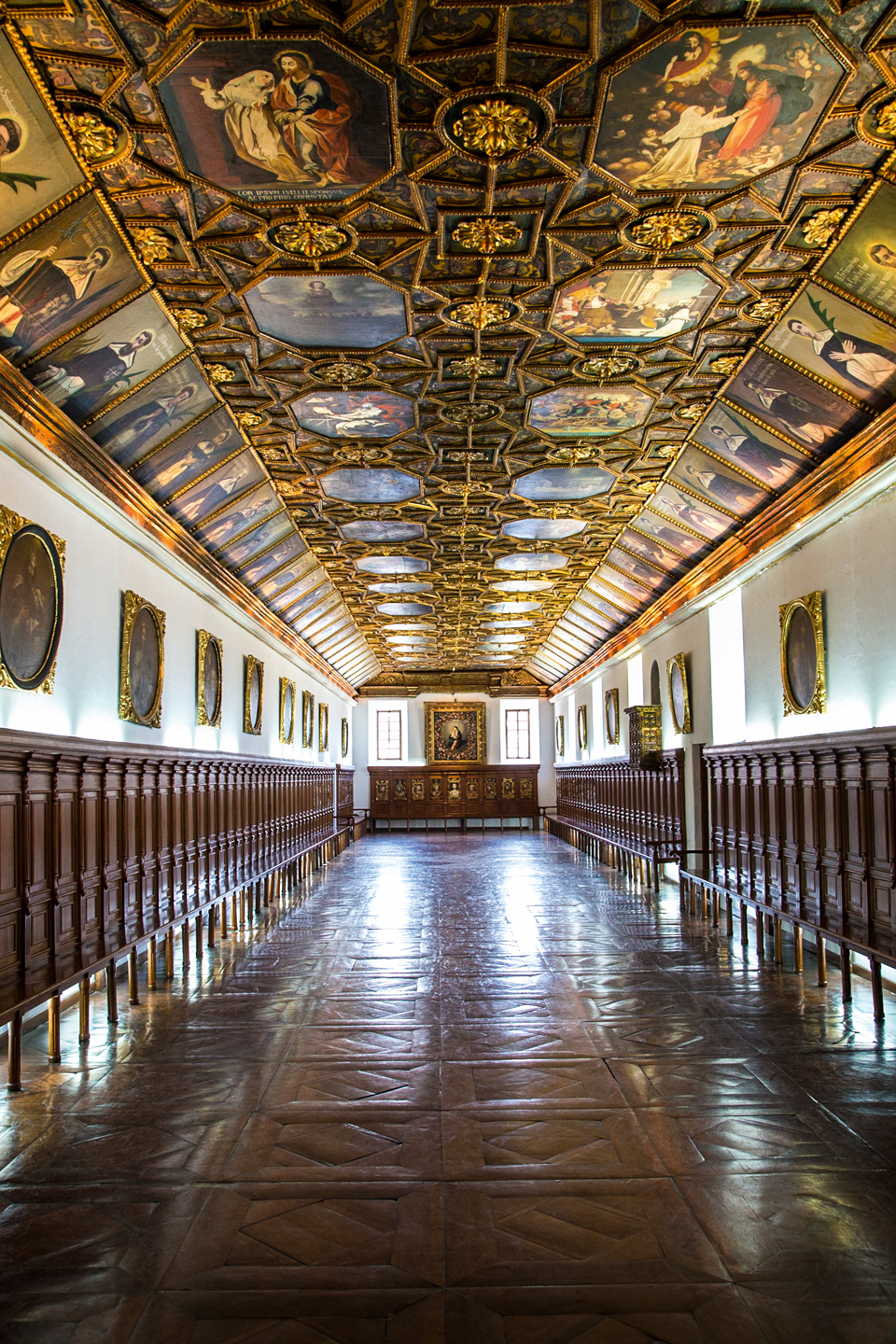 Father Osvaldo made our trip to the convent truly spectacular and absolutely unforgettable. This treasure in the heart of Quito is just waiting to be discovered, with it the rich religious, cultural and artistic legacy that the Dominican brothers left for our city. 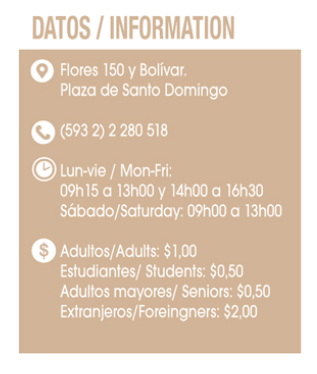 To end our visit on a high note, we decided to sit in Plaza Santo Domingo, taking a moment to admire the extraordinary facade of the church, as the lights of the convent and the city enveloped us in the unmistakably magical atmosphere of Quito at dusk.