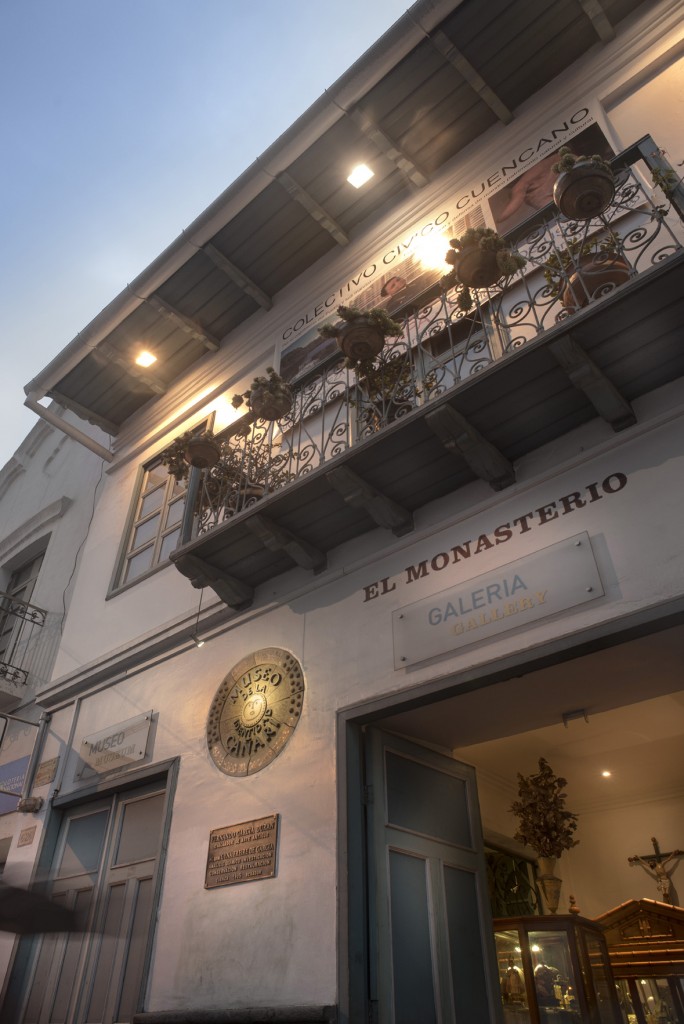 Angela Carter, a British journalist and writer, said that London is male and Paris female. Her view was that the best cities in the world have a feminine personality while the rest, those not so attractive and rather cold, have a masculine personality. Cuenca, without a doubt, is a woman, dancing everyday above the Andes mountains, jealously protected by its citizens, the guardians of her beauty.

There are many ways to treasure history and to tell a story. Cuenca´s antique stores along Hermano Miguel Street are in fact storytellers through the objects they display. A house with a stone facade has a small wood door facing Hermano Miguel Street with counters exhibiting old silverware, Chinese porcelain and sundry other things. This is the entrance to a place where several small worlds are kept, such as an ancient sword or the first bell used by Cuenca´s firemen. Oswaldo Jiménez believes that all human beings seek something. In his case, his collection hobby led him to learn how to be an antiques dealer.

La Casa del Coleccionista El Arcón [The Chest House of Collections] has been around for 25 years. Over these years, it has displayed old flatware, religious figures, Buddha statues, coins, paintings, watches, coal-heated irons, record players, priestly cassocks… Not everything on sale is a heritage object however each item renders a small detail of Cuenca´s daily life in past times. For example, its collection of more than ten thousand vinyl records, range from The Beatles´ Revolver to a concert by a very young José José. According to Jiménez, each item carries its own history and its own esthetic, so an antiques dealer must seek something unique in every object he purchases.

Coin collections are Jiménez´s specialty, particularly coins and bills from Ecuador´s Republican era. For example, a 500 “sucre” (Ecuador´s previous currency) bill dated 1941, which today is worth around two thousand dollars. 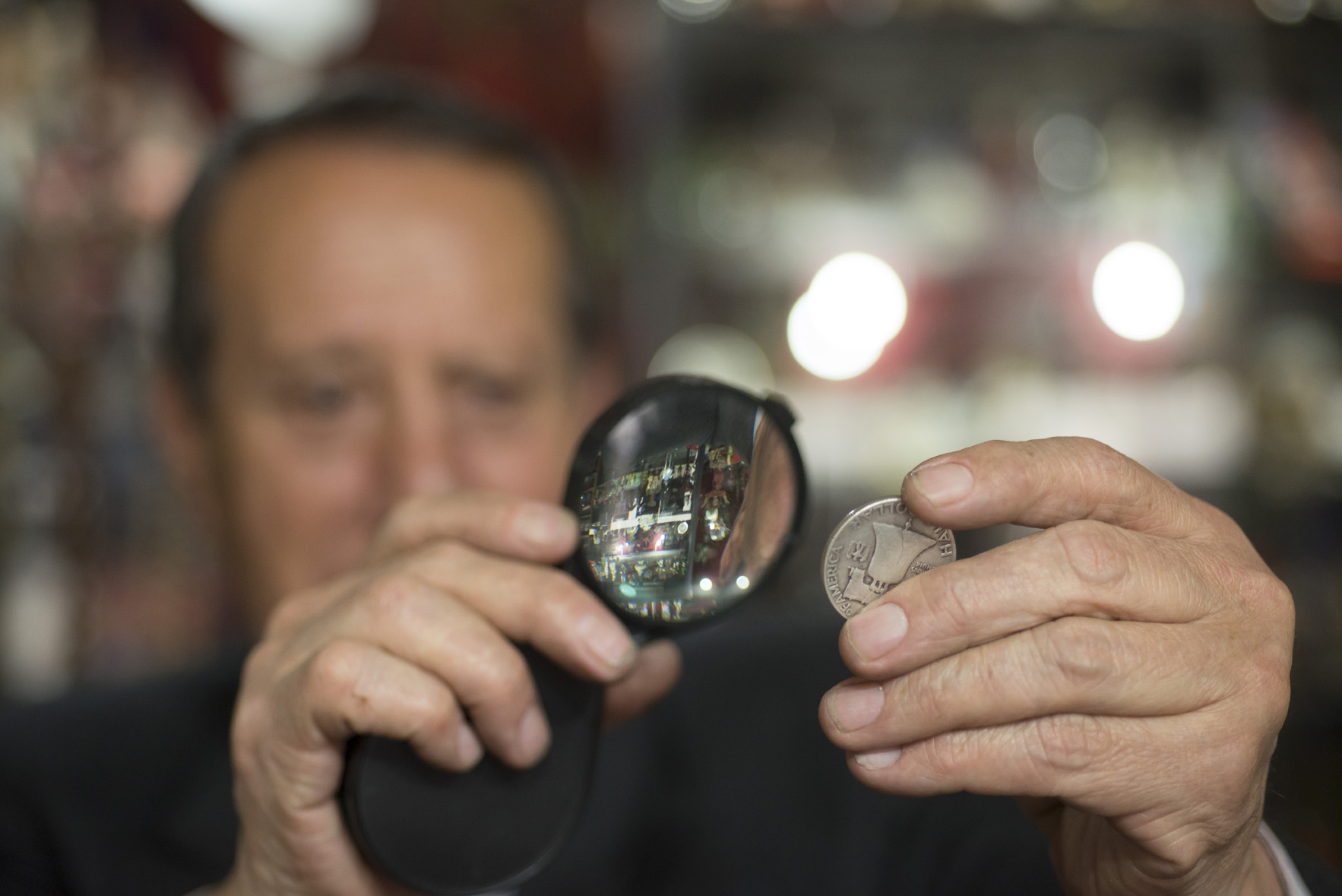 A block and a half from El Arcón, on Presidente Córdova Street, on the corner of the Madres Conceptas monastery, is the “Galería Artes” [Art Gallery], a place where antiques are joined with contemporary art. Galo Durán, the proprietor, has spent 23 years as an antiques dealer, while also selling handicrafts and paintings. An exhibition of Alejandro Beltran´s work can be admired alongside figures of Christ crucified, of his calvary, of children, angels and archangels, following the traditions of Cuenca´s Catholic heritage and recalling the artistic achievements of the 17th century Quito School of painting and sculpture.

Antique dealers are passionate people. They claim it´s the only way to stay active in this business. To spend a day surrounded by unique art works is what makes Galo Durán get up in the morning in a happy mood, regardless of whether weeks, or even months, have gone by without a sale, in fact, not really caring if anything at all has been sold.

Diagonal to Galería Artes is the El Monasterio [The Monastery] which encompasses the Cañari Identity Museum, the El Monasterio art gallery and the Gaspar Sangurima cultural center. It provides technical advice on Cañari and Inca (both pre-Hispanic Indian communities) architecture as well as colonial and republican Ecuadorean sculpture and painting. It also exhibits and sells contemporary art, religious handicrafts and, of course, antiques. 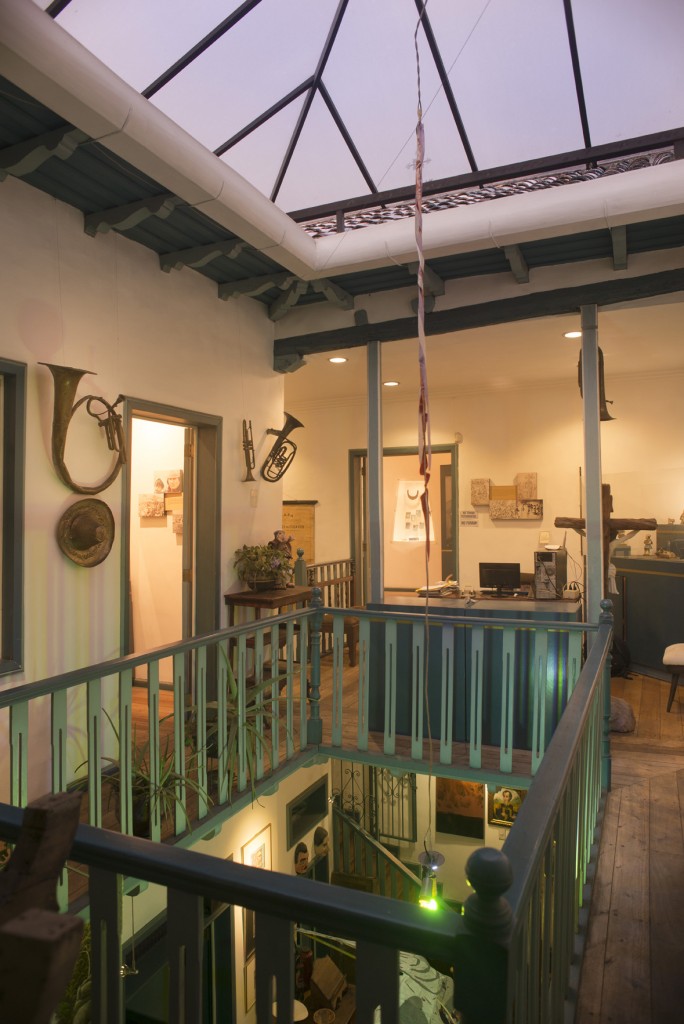 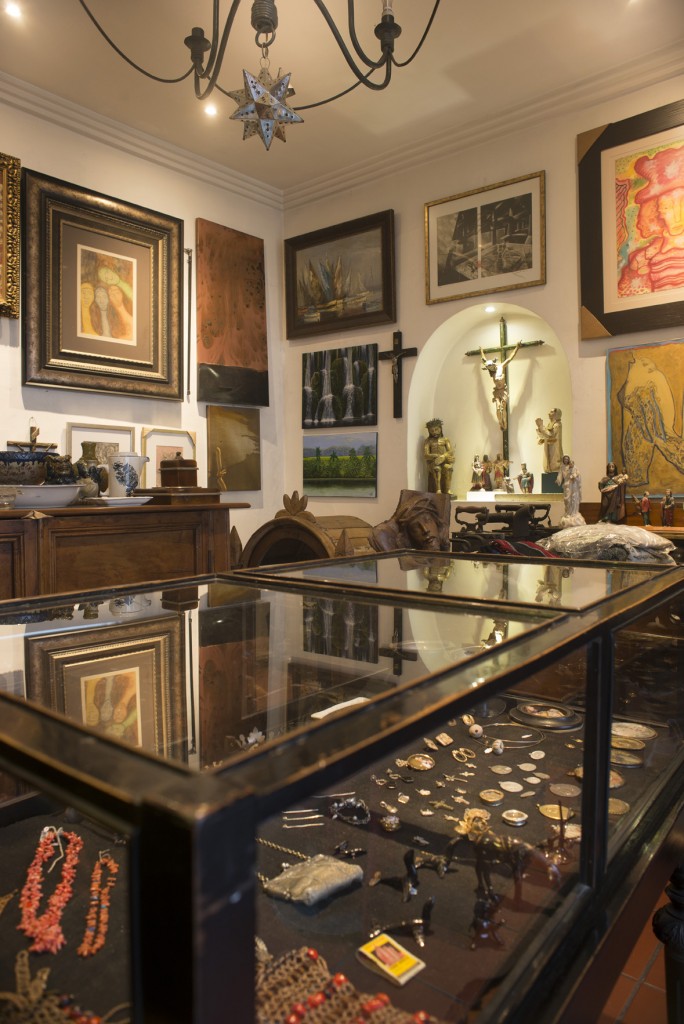 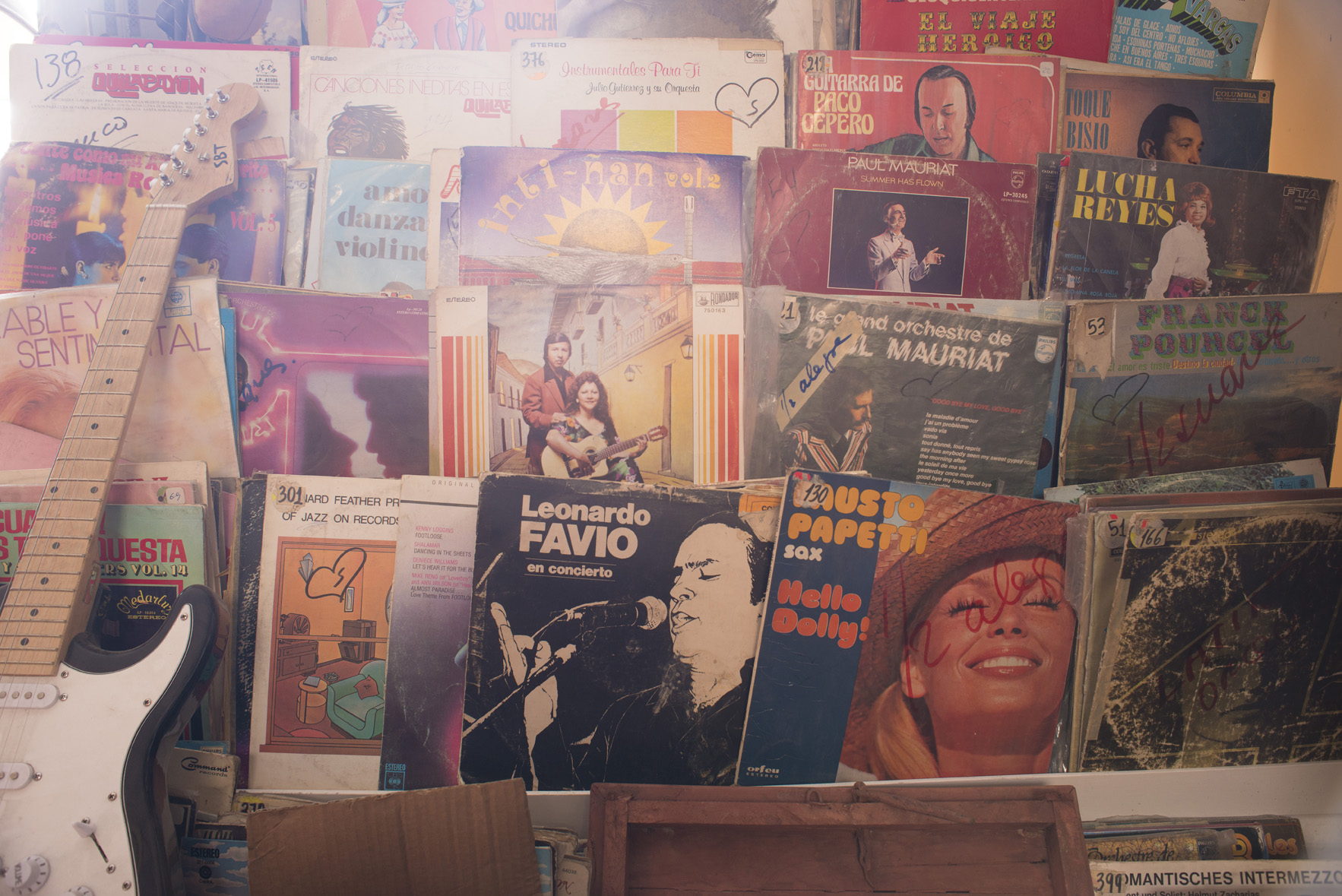 Fernando García and his wife Gyna Freire began this project 28 years ago. Their key motivation was to preserve and transmit the history of those ancient cultures that lived in the area where Cuenca now stands. A theme museum that stores Cañari culture pieces more than four thousand years old is how they attempt to meet their objective. Following this principle, their specialty in antiques are objects that embody the habits and customs of old Cuenca, ranging from a feather to a mid-18th century carriage wheel, all of them for sale.

The works of Edgar Carrasco, Enrique Tábara, Manuel Rendón, Luigi Stornaiolo and Fausto Bravo are exhibited in this house, so this is a must visit for people who appreciate contemporary art. In this heritage two floor house it´s easy to get lost along its narrow corridors full of history and culture. The aroma from each object flows with nostalgia for bygone years. Definitely this place deserves taking a few moments from the lives of all who travel to Cuenca.

Cuenca, like any other city, has its rough edges but, undoubtedly, its beauty prevails, some of it hidden away in the minor details that these antique and art stores yield to browsing locals and foreigners. These places stay open thanks to their owners´ devotion and love for their trade, a rather uncommon one in today´s high tech world. However, in this city of paving stones and clay walls these two worlds, the old and the new, blend just perfectly. 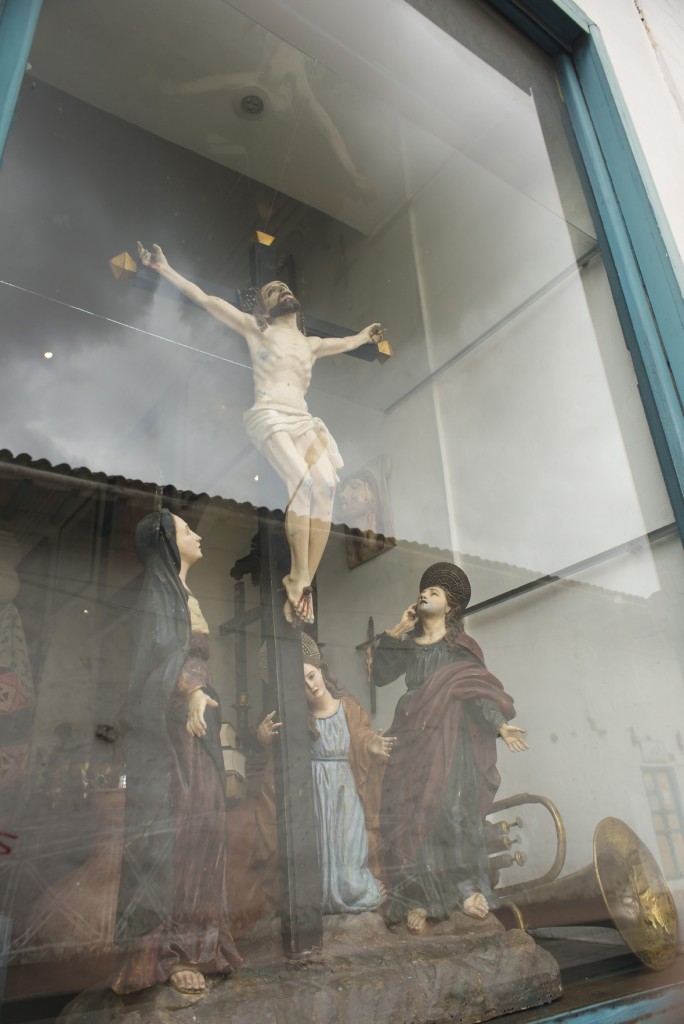 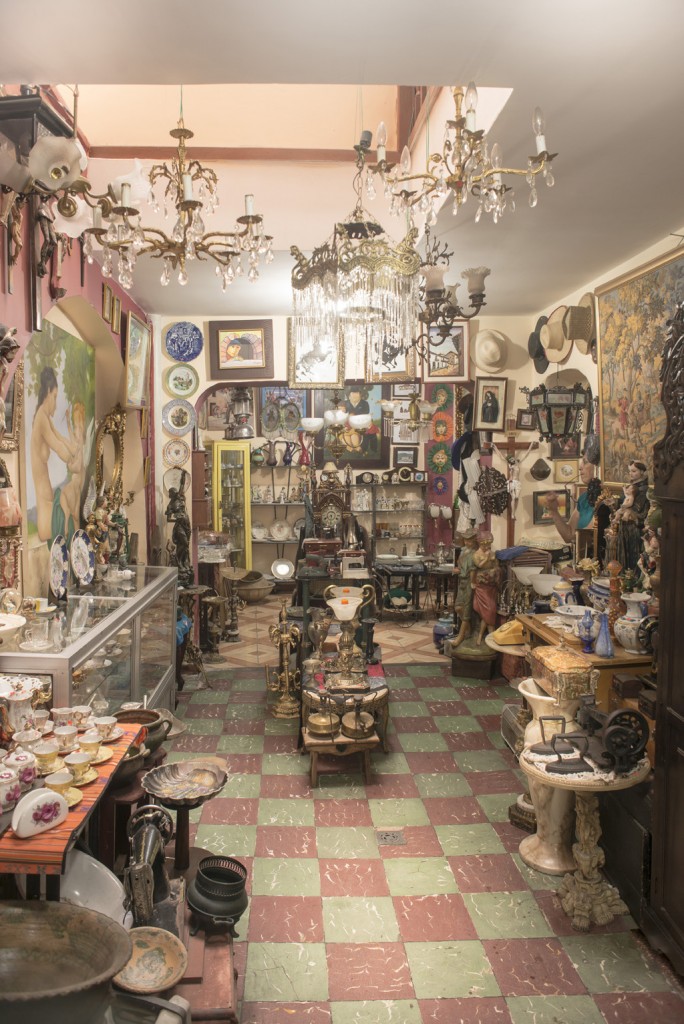