Quito’s Historic Center has many charms. Locals move about these narrow streets and historic balconies without looking up. Here, tourists are easily spotted because they seem to be floating instead of walking, enjoying the wonders that unfold in front of their eyes.

Suddenly, all at once, the noise of ringing bells is heard in the atmosphere. Birds start revolting, distracted locals wake up and tourists are brought back to reality. No matter where you are in the colonial quarter, you will find centuries old churches within sight.

Spanish conquerors left a legacy that continues to be cherished in the hearts of Quito natives and are well preserved in the city’s geography. We inherited more than just our Catholic faith, also majestic churches, chapels, and convents that where built throughout the Historic City Center.

Rich colonial structures remain to be admired today by visitors from all over the world who profess any and all spiritual beliefs, because its allure goes far beyond a mere religious concept. It is the architecture, construction systems, incredible stained glass, art, religious relics and treasures of all kinds coming from a different dimension to motivate multiple sensations.

For many, these are temples where faith turns fears into trust, suffering into joy and misfortunes into hope. For others, these are places for deep meditation and restful silence experiences. Agnostics carefully analyze the surroundings to decide whether or not all this is worth believing in, while atheists are placed in a similar environment to which Karl Marx was exposed when he said “religion is the sigh of the oppressed creature, the heart of a heartless world, and the soul of soulless conditions. It is the opium of the people.” However, with Lent coming to an end, these churches shelter a community that gathers in faith to worship a risen Jesus.

This photographic editorial piece seeks to inspire our readers’ and motivate their desire to discover the marvels of our Historic Center. Little information is provided, just enough to awaken curiosity. If you already visited these wonderful temples from the past, we encourage you to go back and simply enjoy the sound that sprouts from the echo of their ringing bells. It is an experience worth reliving.

Recognized as being the site where a miracle by Virgen Dolorosa took place, above the church’s main altar hangs a painting with her image, as opposed to a sculpture of Christ that churches usually place there. It took 160 years to build its structure, and those efforts are reflected in the rich baroque style that prevails throughout. Columns and walls are made with volcanic stone that came from boiling depths of Pichincha volcano. The roof and domes are made of pumice stone and brick, and it is nearly all covered with gold leaf, almost 52 kilos of 23 to 24 carat. The site’s most recognized paintings are Hell, which depicts Lucifer and 25 sins, each with its respective punishments. On the wall facing Hell is the Final Judgment painting, a representation related to a person’s fate regardless of his or her origin. 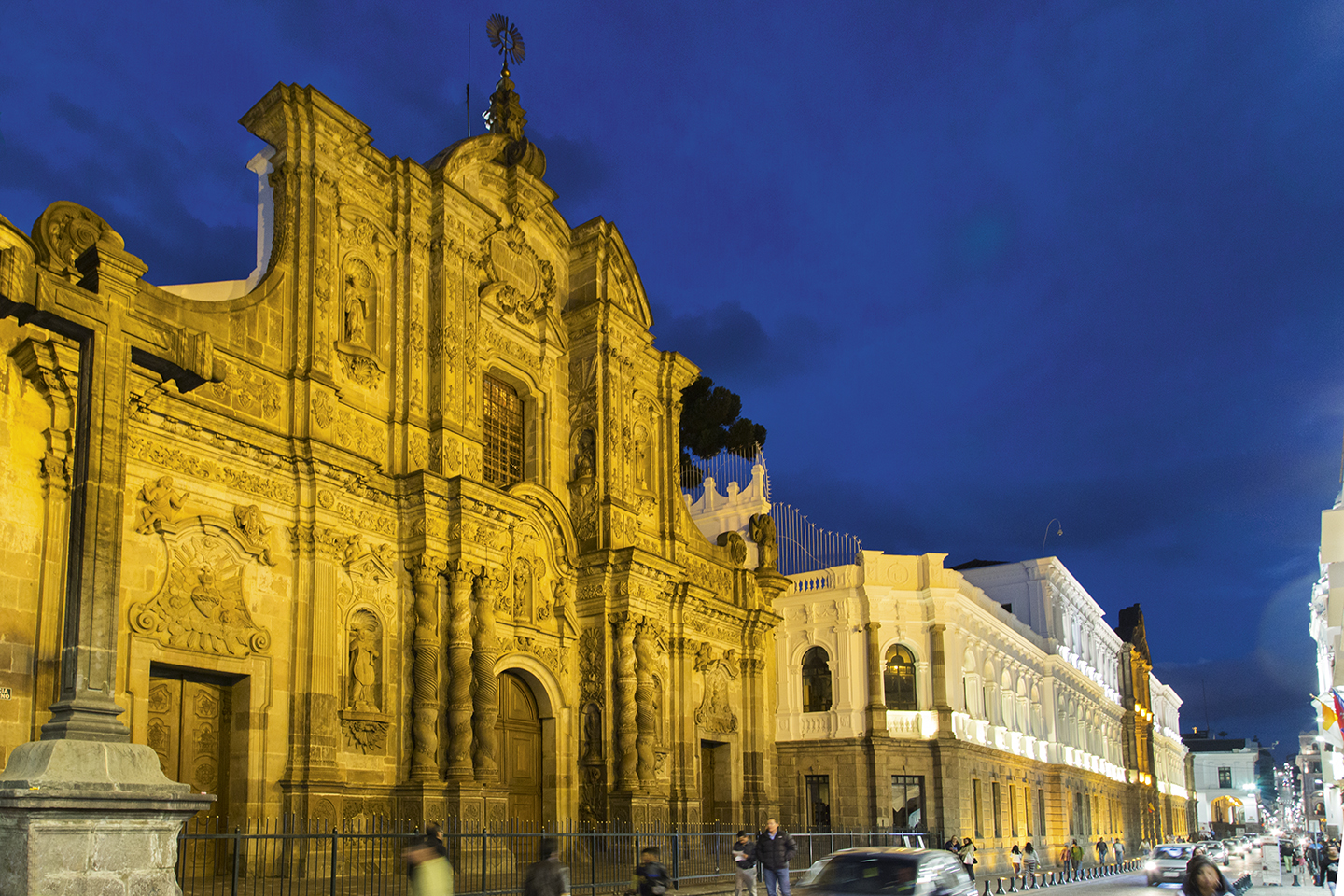 Our Lady of Mercy is uniquely distinct from other religious buildings. The walls have Inca type foundations, oval domes inspired by surrounding hills, marine details from cliff sides, and a stone patio with a Neptune fountain. During afternoons in the sacristy, shadows and sun gently touch saints and crucifixes with light. The famous sculptor Sangurima created some of these, and eight archangels, all works of Mideros, guard them. These large figures, towering at nearly 13 feet each, include the Archangel of Time, which reminds us that once time is gone, it never returns. The Mercedarian Church of Quito represents religion and traditions, history and processions. The Rosary at Dawn serves faithful early risers, and the celebrations of Mercy at the end of September are yet another reflection of the lives of people in Quito. 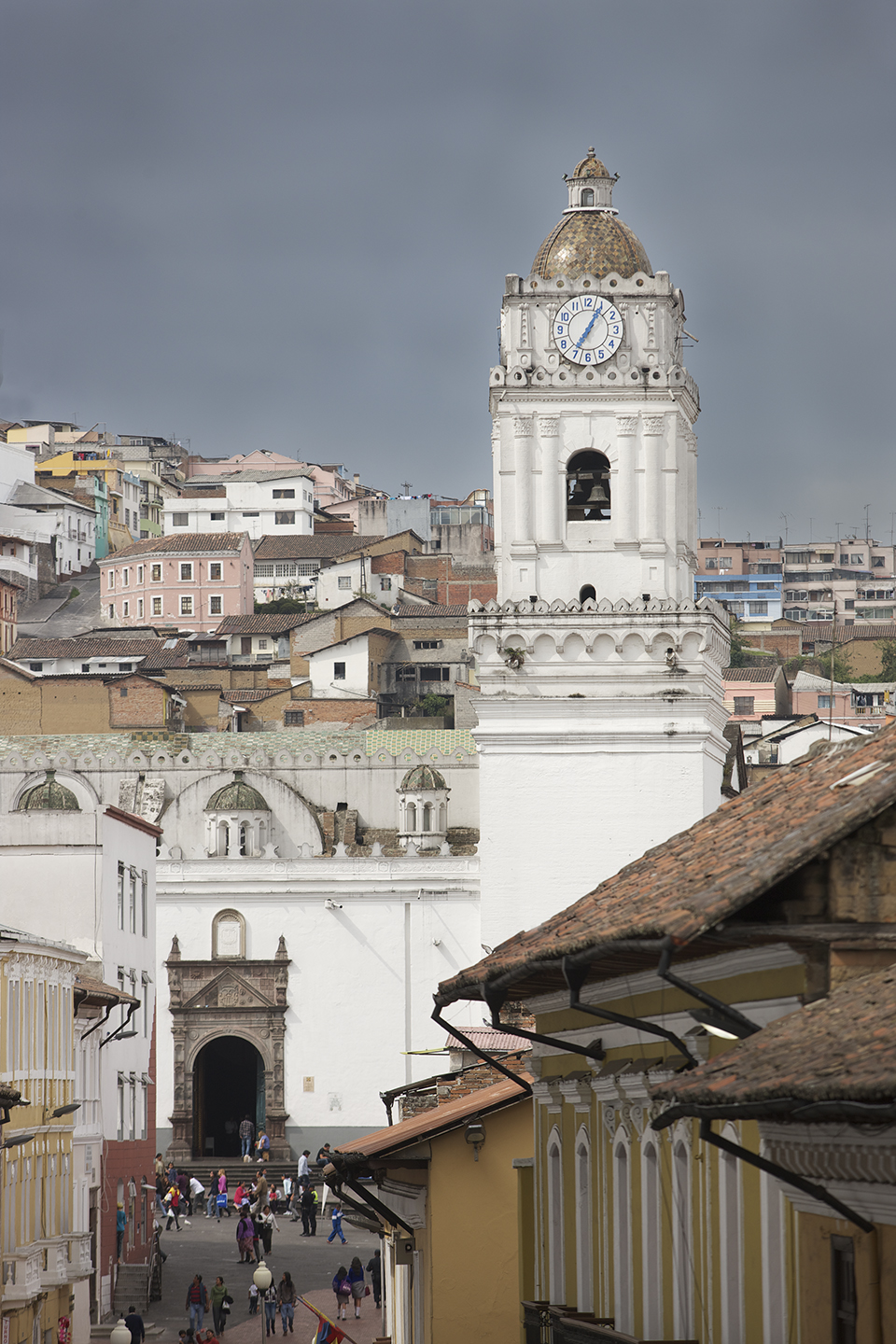 Everyone admires this huge neo-Gothic monument, which was built of stone and cement and rises nearly 100m above the side of the city’s famous San Juan Hill. It took nearly one hundred years to build the Basilica of the National Vow, which stands out as the largest of its kind in South America. Without a doubt, this is the most important                    neo-Gothic architectural project in our country’s history. The main altar in the transept is made of Carrara marble (dug out of the Apuan Alps in Carrara and highly valued for its pure whiteness); where the Eucharist is celebrated. Outside, the “gargoyles”, which are actually figures of endemic and exotic Ecuadorian animals, include, among others, alligators, tortoises, boobies, armadillos, monkeys, and pumas, providing a unique touch to this unprecedented Ecuadorian neo-Gothic style. 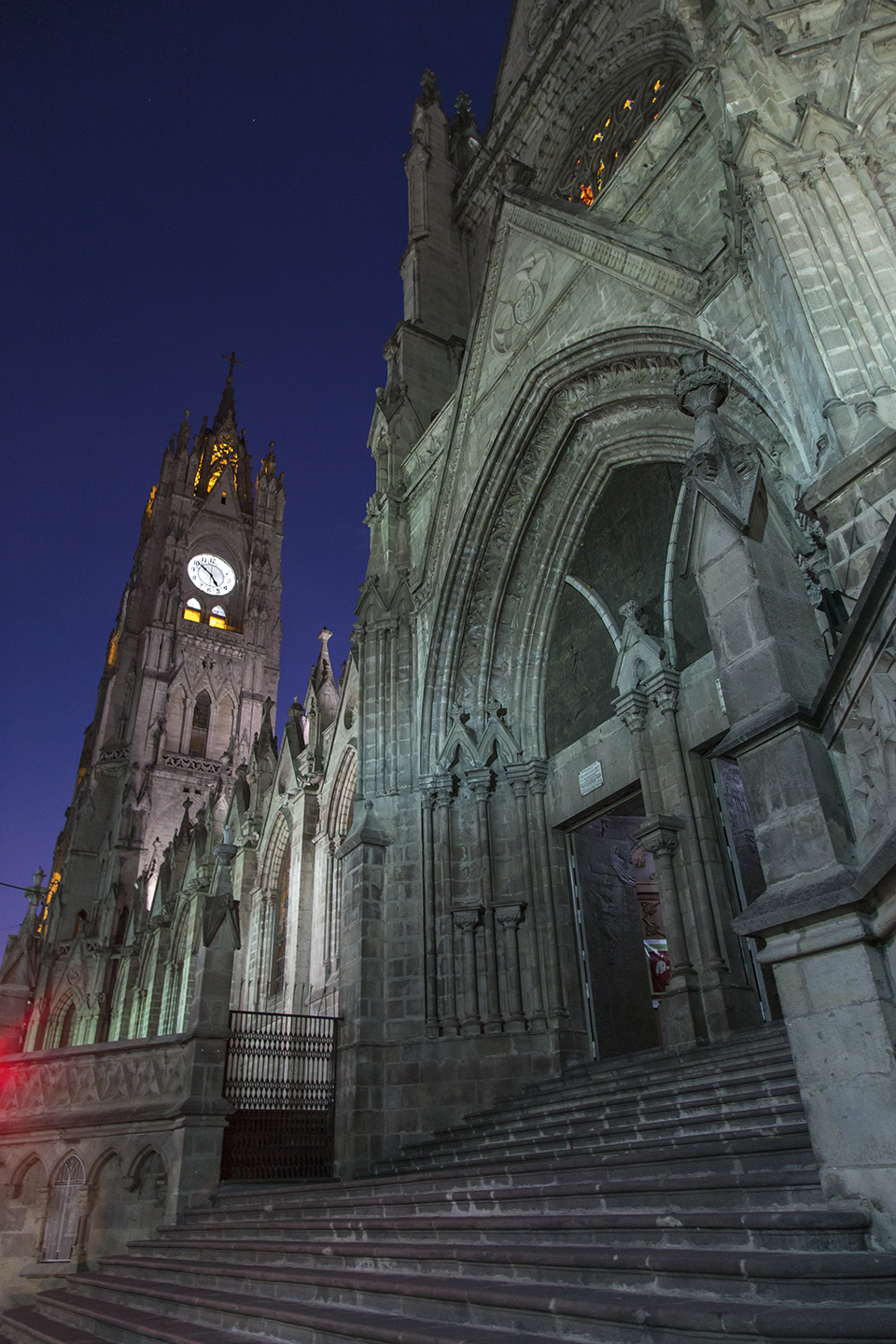 Religious mysticism, artistic emotion, and of course historical legends, all make the Saint Augustine Church and Convent one of the most beautiful, traditional, and representative in Quito, the Sacred City of the Andes. Hanging off of a Quito cliff side and with views including the Camino Real ravine, this church appears to be suspended on a slim blade in the sky. It used to be the University of San Fulgencio of the Augustinians from August 20, 1586 up to the 18th century. Since then and for nearly three centuries, it hosted the School of Theology. Today, it is home to the members of a growing Augustinian community. It holds the Convent Museum, Library, and special areas dedicated to Art, History, and Memories of our Republican Era. 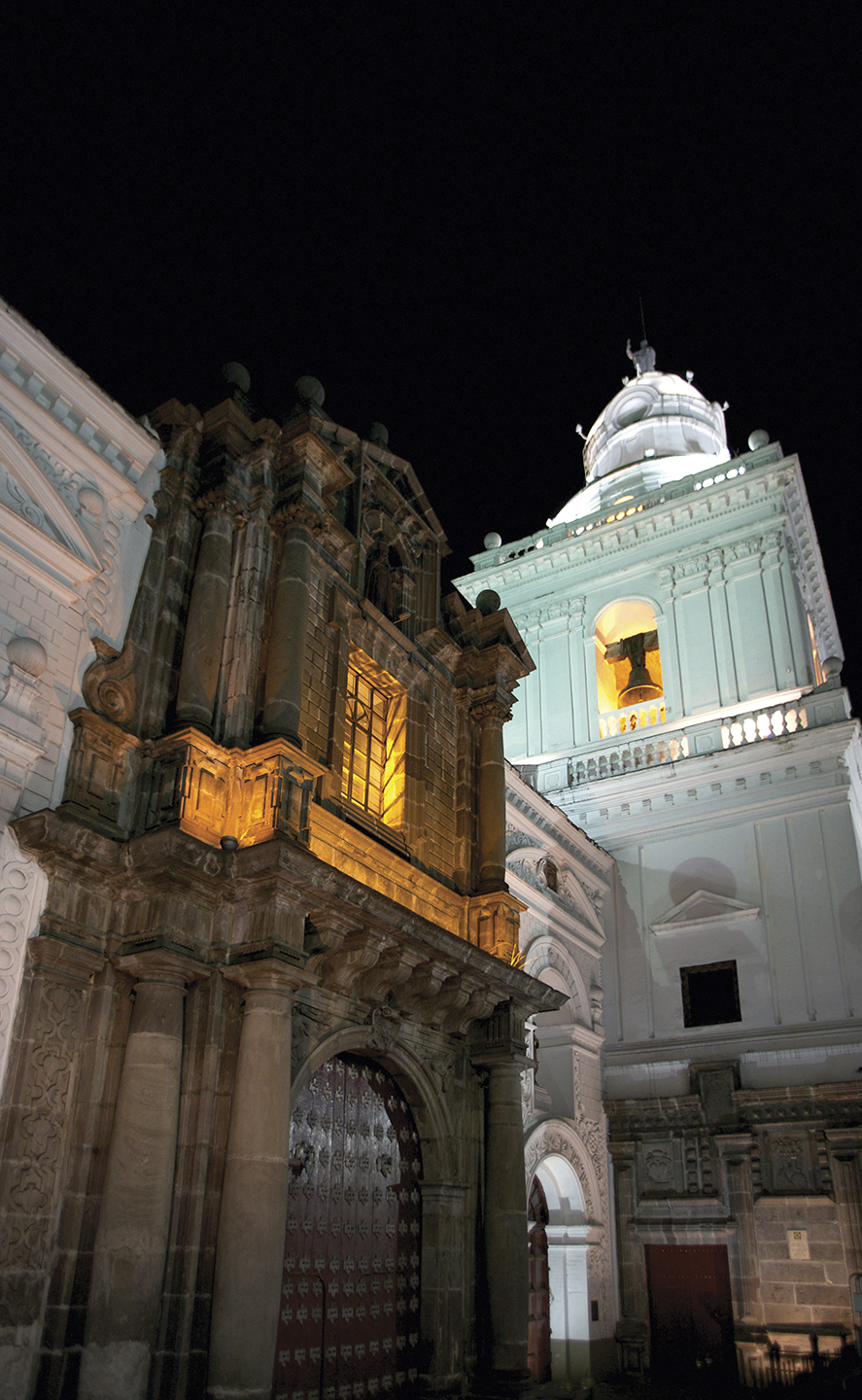 In 1995, the Metropolitan Cathedral of Quito became the Priority Cathedral, where the country’s highest authorities organize important events. The main door is located on the Street of the Seven Crosses; name that was changed to honor conservative president Gabriel García Moreno after his dramatic death in 1875 on the side of this road. Our pride is overwhelmed and our spirituality is inspired At the Metropolitan Cathedral of Quito, upon the understanding of its true meaning of existence. This site awakens our enormous responsibility to preserve it as our cultural heritage, and conserve it for posterity. 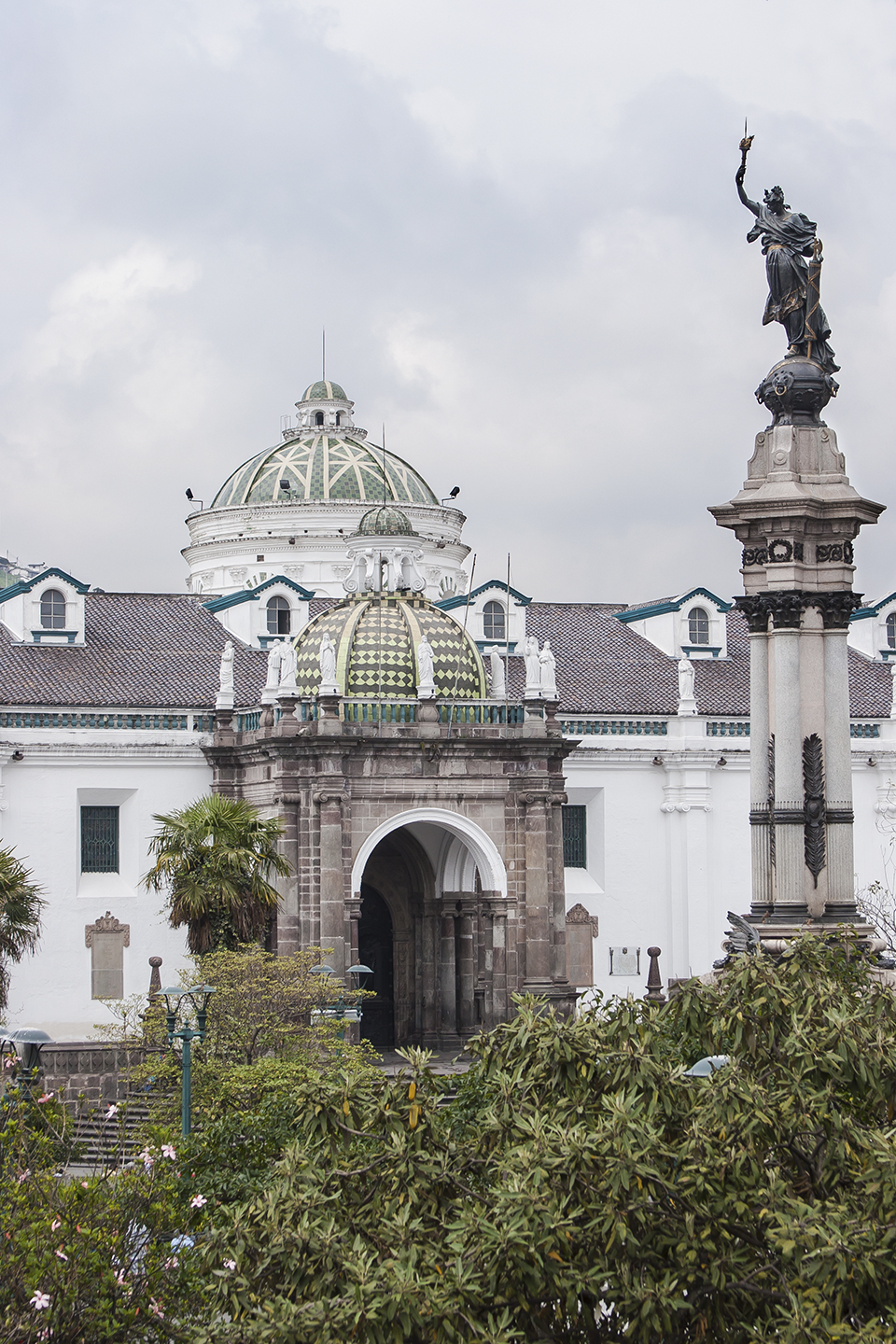 Built on land assigned to the Dominican monks in 1540, it continues to be one of the Historic Center’s most visited and admired catholic monuments. The temple is full of intricate cedar carvings covered in gold leaf. Its walls are adorned with paintings and artwork with high religious value, while ten lateral interior chapels clearly show the importance of this temple, whose original architecture is attributed to Francisco Becerra. Construction was completed in 1688. The Our Lady of the Rosary Chapel is the best known of Santo Domingo’s treasures, along with the famous Cloister and great square extending out in front of the church, where a monument to honor Antonio José de Sucre, a hero of the nation’s independence, was built. 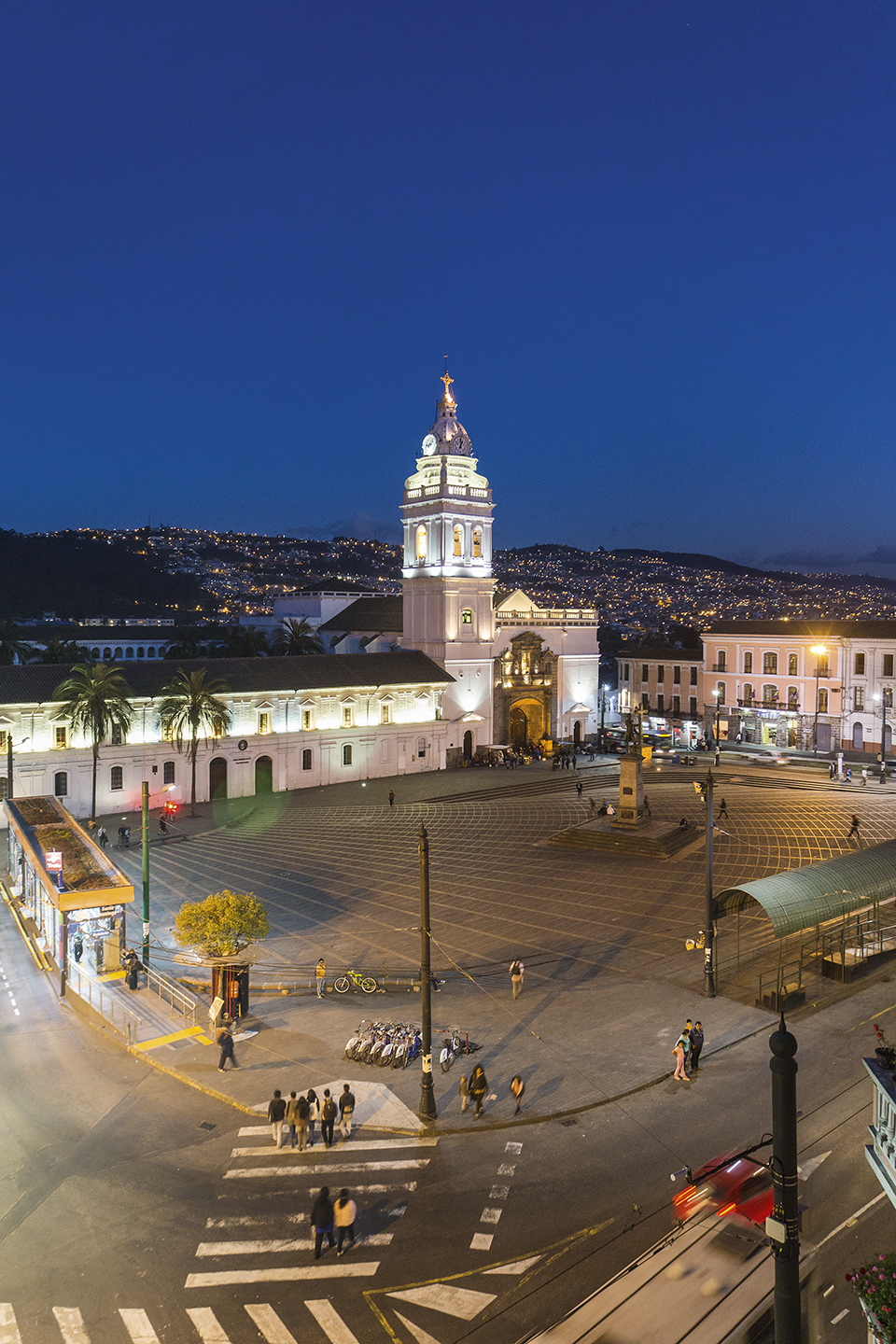 San Francisco is truly magnificent. The facade is reminiscent of Spain’s El Escorial. In fact, those blueprints served as inspiration, since designer Friar Jodoco Ricke used the Royal Palace of Madrid as a model in an effort to showcase the far-reaching power of the King at that time. The building’s general layout, which includes patios, dining hall, school, residence, and the old brewery, are all clear signs of its similarity to famous Spanish sites. Versions of the church’s origin say that San Francisco was built on top of the Sun Temple, while others say that it was erected on the ruins of Prince Atahualpa’s headquarters. The towers all look identical and were built exactly under the shadow that the God Sun projects from high up on the mountain where it seats in power. If you look at them from the front, the left one is aligned with the bell towers of the Church of the Companía de Jesus and Saint Augustine Church. 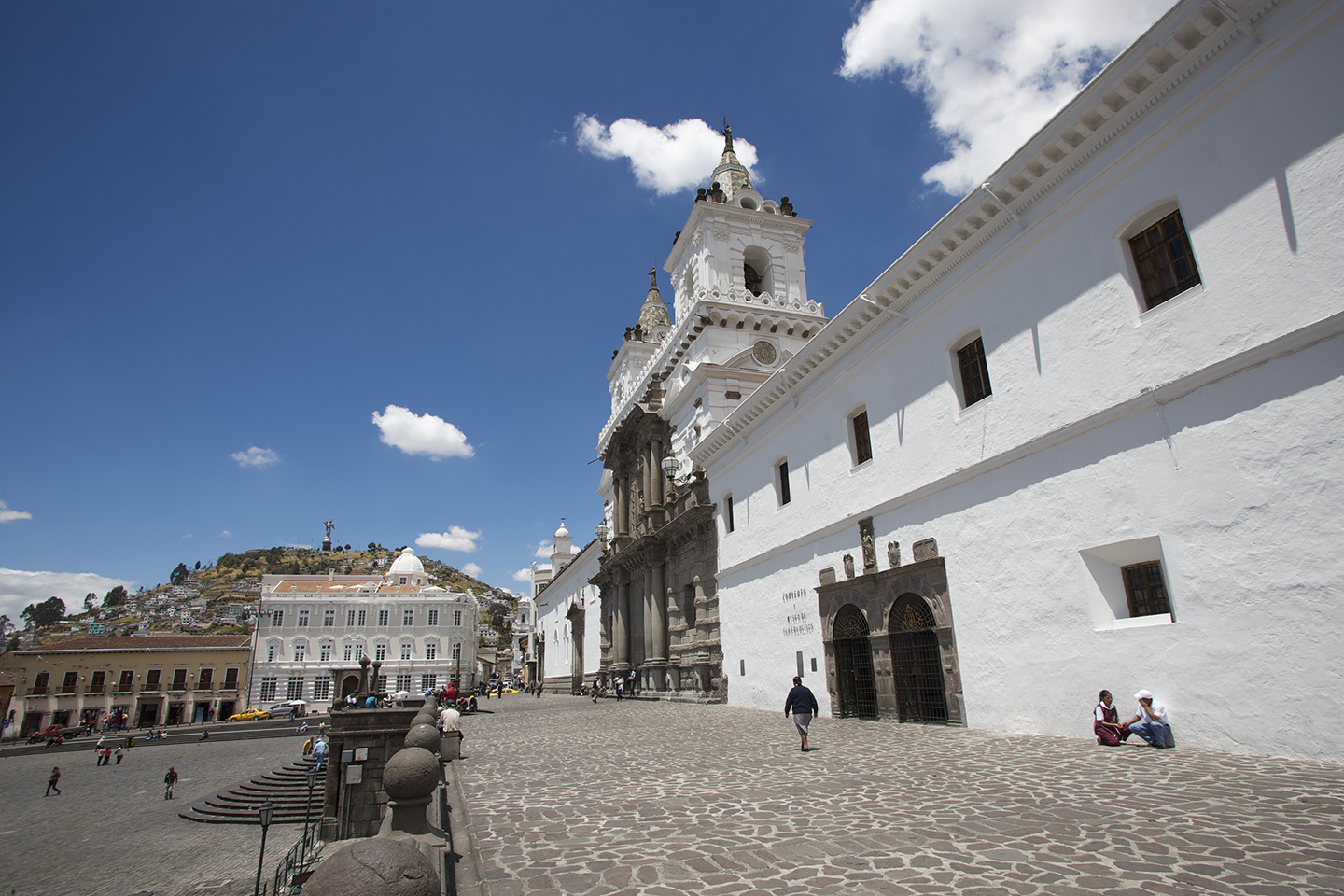