* Visit Casa Gangotena´s website by clicking on the logo

The day announces itself gently at Casa Gangotena, whispering that it is time to wake up with the flap of bird wings over Plaza San Francisco and the soft rays of sun intruding into your slumber. I had pulled back the thick, heavy, luxurious curtains so I could wake up at sunrise.

There was no need for an alarm clock: at 5:00 am, the Panecillo Virgin Monument, an emblematic statue watching over Quito, became visible through the window pane, still illuminated for night time. “Get up”, she seemed to murmur. I am not a morning person, but the view was worth the small sacrifice. Watching the sunrise from Casa Gangotena was like witnessing a veil being lifted from the horizon, revealing the most intimate secrets of the city.

I climbed up to the terrace wearing just slippers. My hair was somewhat tousled, but nothing really mattered when it came to taking in this rare early-morning view of Plaza San Francisco. The birds that had been chirping and tweeting as the sun rose had grown quiet, as if they had flown away to other parts of the city. Now, I could distinguish the ring of laughter inside the church and make out the first conversations of the day as people walked across the square. From my vantage point, at the northern edge of the Historic City Centre, the sky seemed to be burning with fiery reds and oranges that stirred the clouds. Beyond the two towers of the Basilica of the National Vow, the largest neo-gothic church in South America, the skyline of the city’s modern urban centre rose up over the tile rooftops of Quito’s colonial houses.

The bells of San Francisco Church struck six. It was the signal, like a go-ahead, for the early hum to become a loud buzz, and for the nearby churches –such as the Cathedral and the baroque church of La Compañia- to turn off their lights, and for the sky to turn a clear, crisp shade of cornflower blue. The city was awakening to its own tempo, to the beat of local business owners, traders, masons, and other visitors…some hurried, some placidly strolling along. “Periódico”, called a street vendor from Benalcazar Street, selling newspapers. The crowd thickened and became one. The city-dwellers crossed paths and congregated in Plaza San Francisco, which was coming alive with sunshine and people.

This is the music that beats to the rhythm of our city. Down in the square, a street vendor tried to lure passers-by with what sounded almost like a song: “caña!” (sugar cane) he called, stretching out each vowel. “Empanadas!” called a different vendor, and “arepas” said another, with an accent exuding Venezuelan notes. The subtle aromas of traditional dishes wafted out from each corner of the neighbourhood. My stomach rumbled: it was time for breakfast. 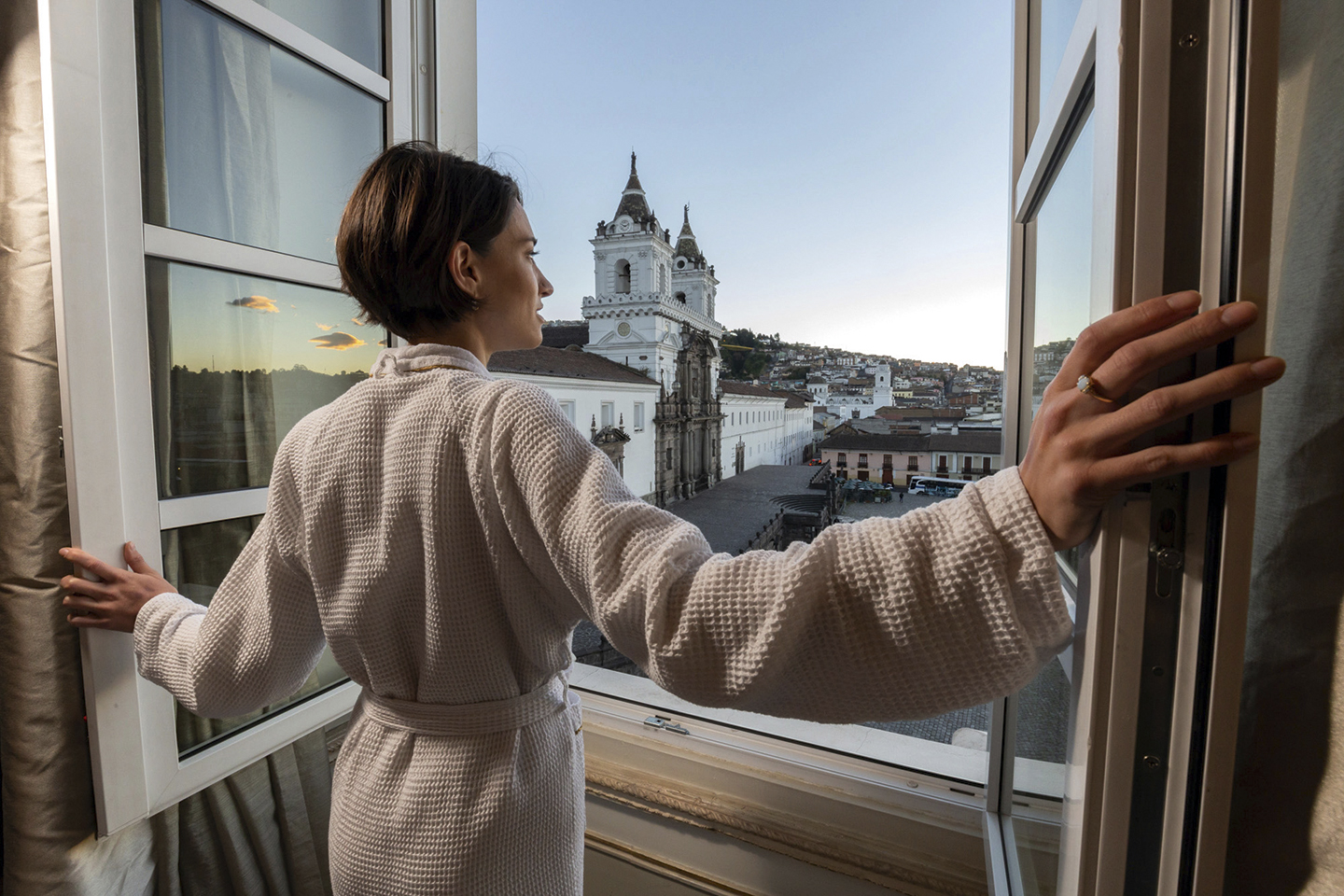 I headed back to my room. I had perused the menu by my bedside the previous evening, so I knew exactly what to order: the Tigrillo, a typically Ecuadorian dish prepared with mashed green plantains, eggs, cheese, and meat stew. I ordered room service and waited as the sunlight from the southern flank of the hotel stroked my face. Relaxed and mesmerised by the view, I began reading a few sentences from my book, but the wait was short. The breakfast came with fruit, cereal and my favourite fruit juice: passion fruit, a delicacy from the region. I drank a few sips of delicious coffee and had a feast.

The room, ample and cosy at once, seemed to be taunting me to stay in. I decided to indulge in a bath before dressing and taking the time to wander around my chamber. The space lent itself well to solitude but could have served as a sanctuary for a couple.

Outside, the contrast was sharp. The city was vibrant with the hustle and bustle of life. I explored the neighbourhood. A newspaper salesman was having a conversation about the radiance of the day’s sunshine. A block away, an elderly woman was doling out Guagrasinga stew, a traditional dish among Andean indigenous communities. She beckoned to me. “Next time”, I said, still feeling full from breakfast. 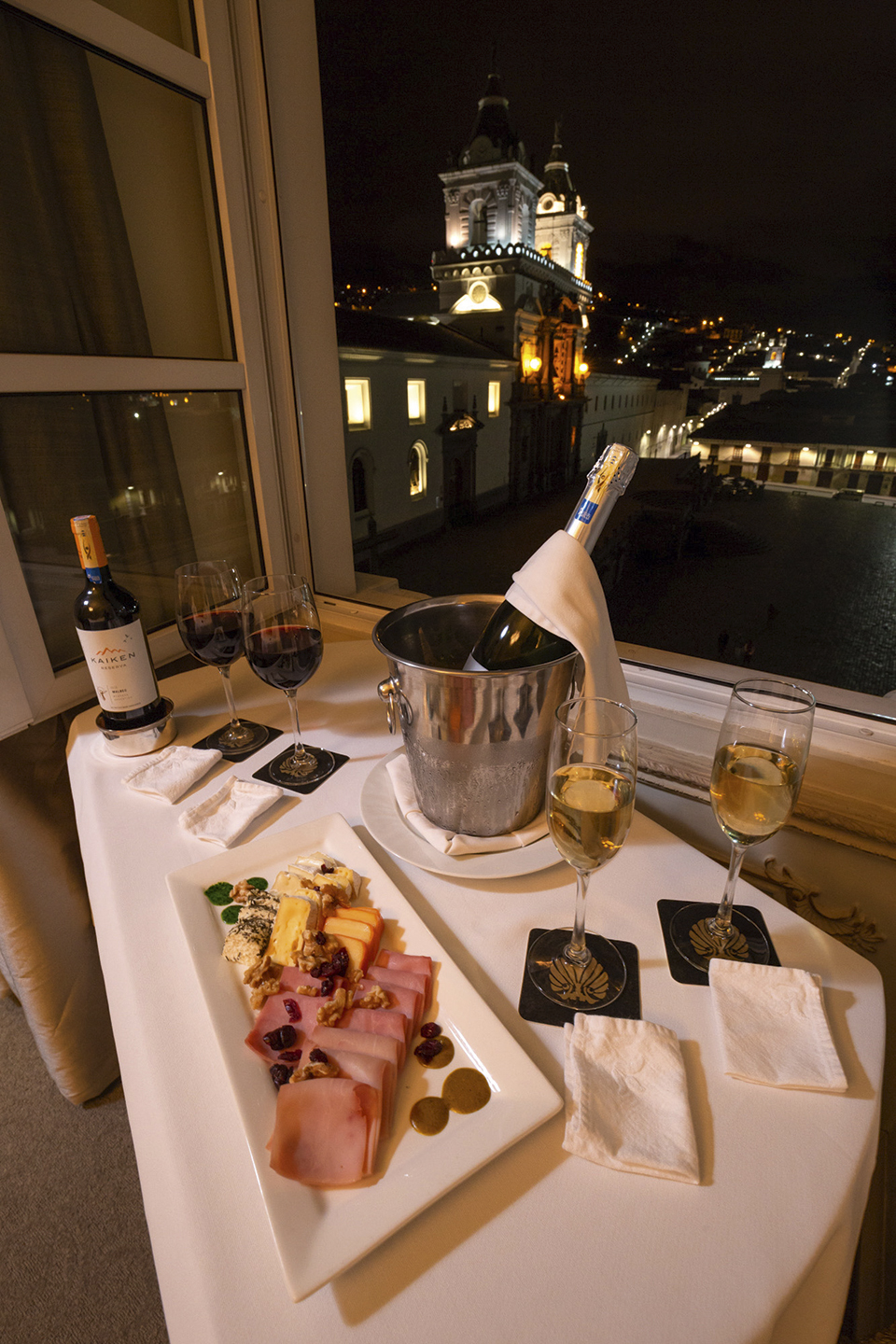 Plaza San Francisco is a meeting point for the entire city. It welcomes students, business people, and tourists alike, and is close to the San Roque Market, the largest in Quito. The pigeons and children in the square seem constantly to be involved in a game of tag. The small legs run towards them, and a confusion of feathers and beaks flutter off and gather again elsewhere in the square. Their flight seems to be orchestrated by the children’s laughter.

Near noon, I went back to the terrace for a wide-angle view of the movement all around me. Quito stretched out infinitely and lithely towards the snow-capped mountains in the horizon but was also a concrete mass laid at my feet, radiating out from a centuries-old square. The city was awake, busy, and dazzlingly alive. From the terrace at Casa Gangotena the landscape had its own flavour and smell. I stood transfixed as I breathed it all it. 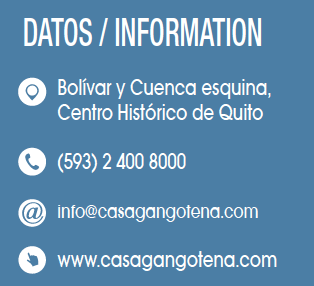