Hacienda San Agustín de Callo is located at the foot of the majestic Cotopaxi volcano, hidden in a magical landscape, with fascinating work in its structure and mystical in its spirit. In this one place, among old trees and colorful geraniums, two worlds, two cultures, two religions, conquered and conquerors merge. The stones of the house, polished to the Inca style, are interspersed with the traditional mortar of Spaniards, who expelled Incas from their home to turn it into a silent Augustinian convent.

The current owner, Mignón Plaza, welcomes guests and tourists with a friendly smile and a warm hug. She inherited the estate from her father, José María Plaza, who had received it from his father, General Leonidas Plaza, two times President of Ecuador at the beginning of the 20th century, a liberal remembered particularly for having separated the civil marriage from the ecclesiastic.

The hacienda holds Inca ruins, which were always visible in the two ceremonial rooms that have been converted into the chapel and the dining room. These spaces were incorporated into the Augustinian convent without touching its structure. The Augustinian “obraje” was built on the structures that surrounded the central patio.

Restoration work has been done on the exterior walls; it was an archaeological project carried out by several experts on Inca ruins and San Francisco University students. The owners wanted to restore the imperial Inca style walls that appeared while remodeling the house to turn it into a lodge. Today all the ruins are visible, although some are protected with glass, but well lit so they can be appreciated. 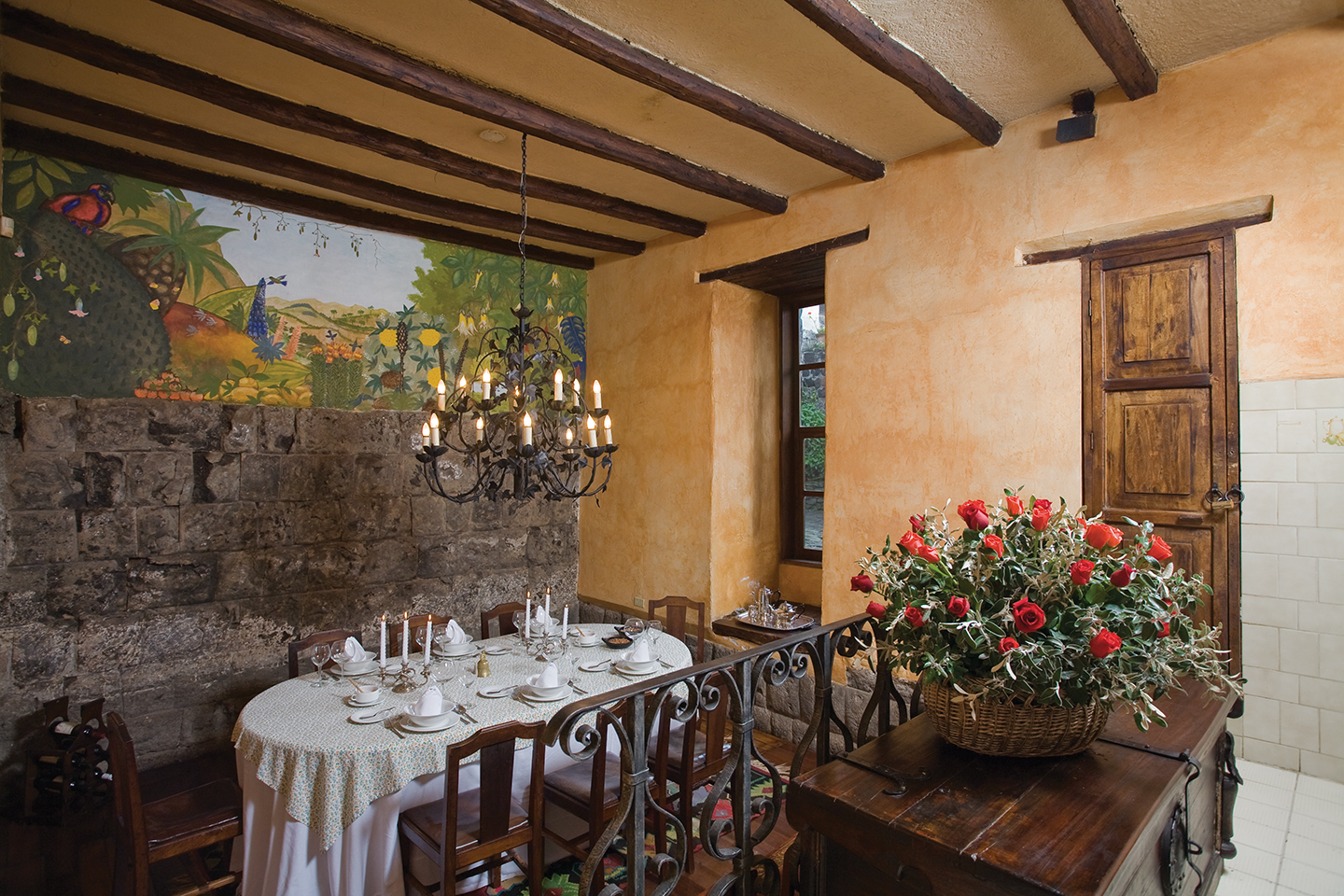 Visitor’s can´t hide their emotions. The historical tour shows the various architectural styles plus the natural beauty that surrounds it. From colonial times people came to visit the ruins and needed a place to stay. The owner’s plan was simple. She thought about making small rooms and offering a good breakfast, eggs with bacon. For lunch, the locro of San Agustin, which was already famous. That was it! 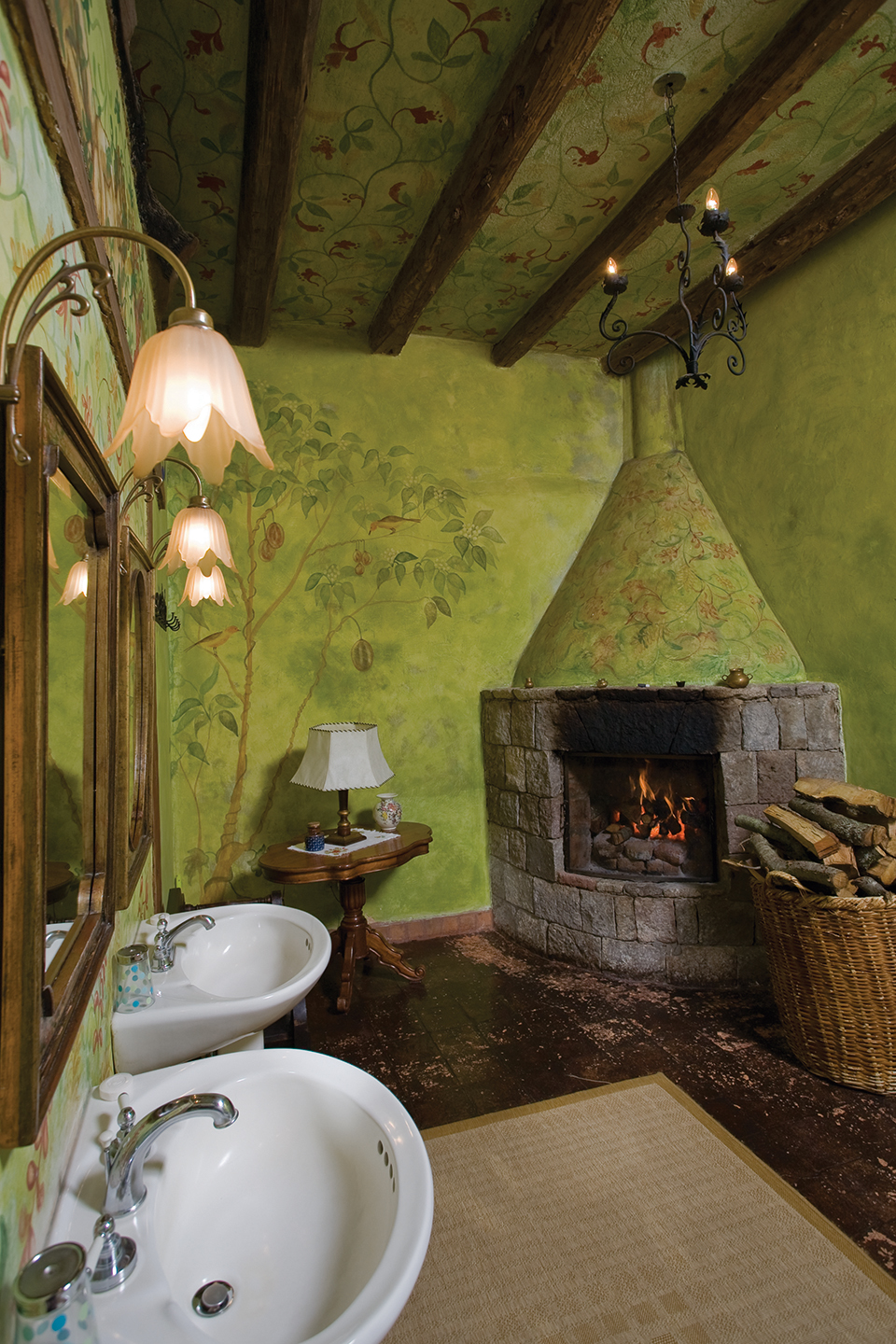 The farm held typical events as the restoration progressed. In the days of the Inti Raymi, the Inca Sun Party, communities near the hacienda participated with dances wearing typical costumes, music, and firework castles… This party is held every year. 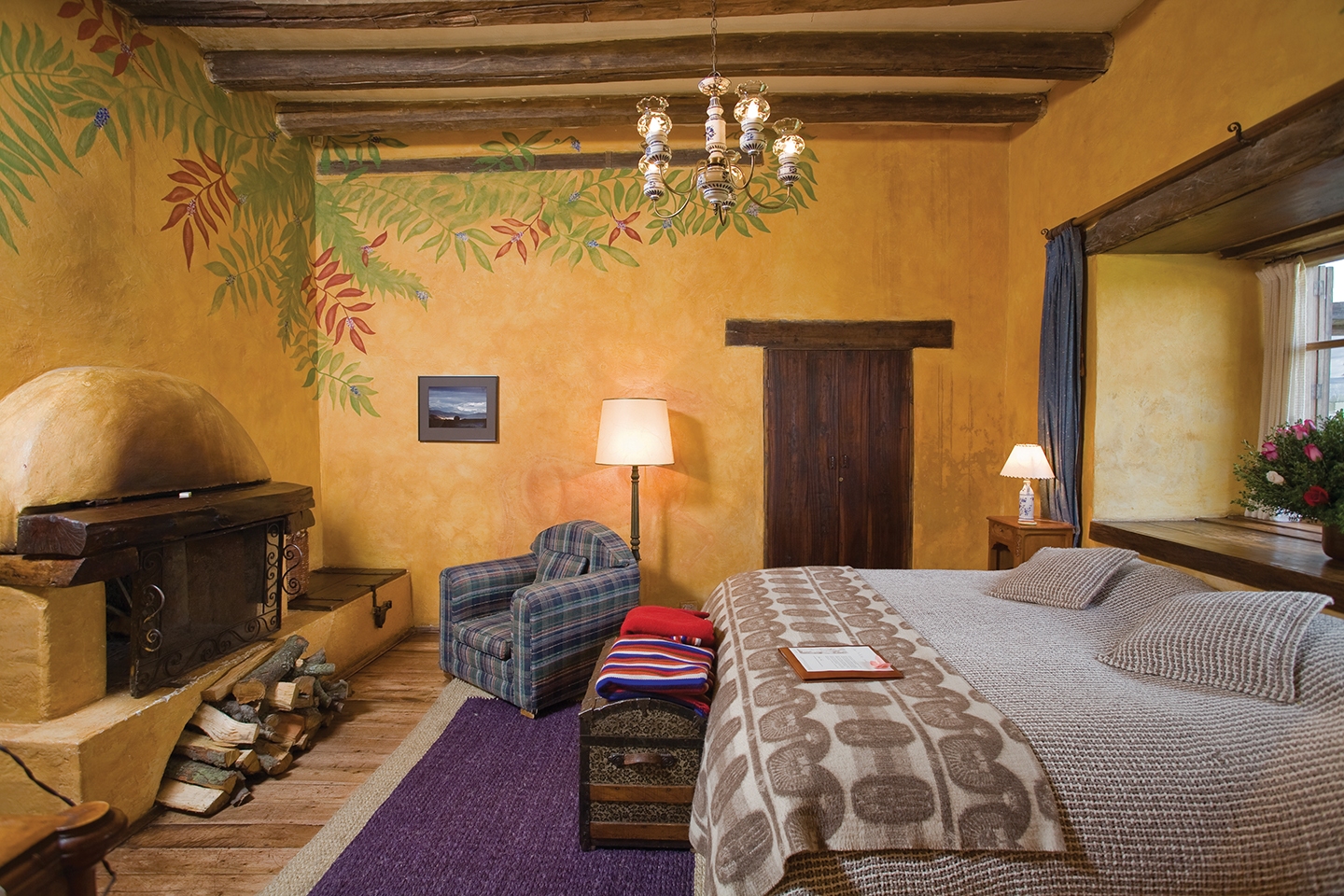 San Agustín´s rooms have their own personality and unique decoration with antique pieces, romantic beds, armchairs and beautiful tables. Many of them have fireplaces and some, Jacuzzi. Some are suites, very convenient for families, and all of them have magnificent views. The hall, dining room and kitchen overlook the corridors. They are spacious, cool and surround the patio, which is the center of all activities. Stone columns support the eaves. 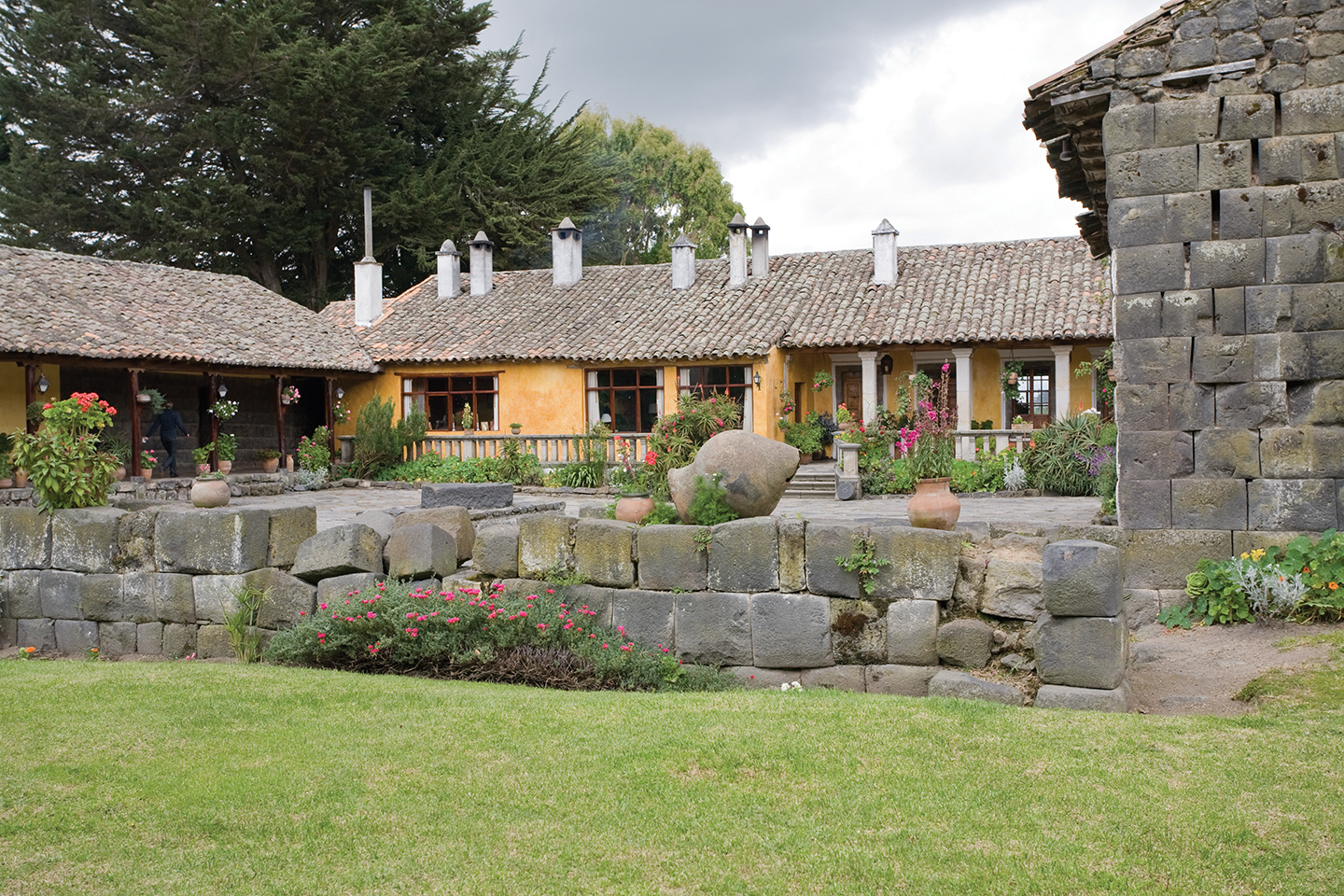 San Agustín was built mainly in stone, basically because there is great availability thanks to Cotopaxi volcano eruptions, but also because both Inca and colonial architecture used it a lot. Manuel Araya, a Chilean resident in Ecuador, was in charge of painting the frescoes on the ceilings and walls with garlands, fruit trees and naked figures styled as in the Renaissance period. Diego Ruiz and Carolina Rodríguez collaborated with him.

Various activities are offered for tourists. Among them, horseback riding suitable for beginners or advanced riders, in an adventure that takes them through a pine forest and ends at the foot of Cotopaxi volcano. Mountain bikes and walks with professional guides, unforgettable excursions that explore attractions near San Agustín are offered for those who do not like horses, who can choose between visiting parks and ecological reserves in the Cotopaxi National Park, or climb to the Cotopaxi lodge at 4,800 meters above sea level and ride a bicycle back. 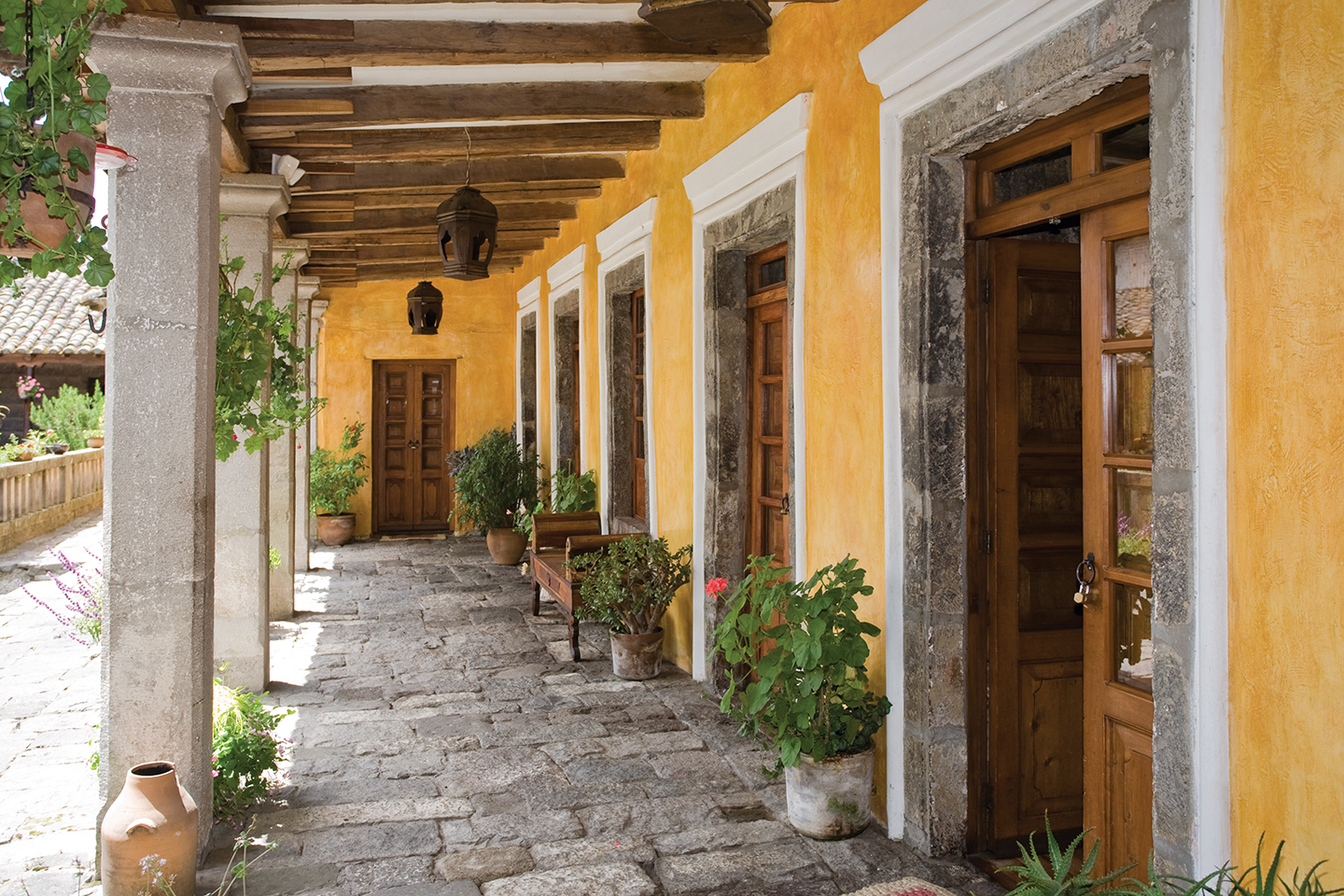 The location of the hacienda is perfect as it is close to several activity options. A visit to Bellavista in Llanganates Ecological Reserve to get to know the typical way of life of Andean people while an impressive view accompanies you all the way; the Quilotoa Lagoon; or the Ilinizas thermal reserves that will require a 45 minute walk through a polylepis forest.

Leaving nature aside, one can immerse in the local culture and take unforgettable trips to indigenous markets. Thursdays to Saquisilí and its animal market; Wednesdays and Sundays to Pujilí and the exhibition of its traditional ceramic figures; Zumbahua, where you arrive at dawn and offers wonderful landscapes, plus you will meet indigenous people dressed in the traditional way, with their llamas loaded with products.

The spirit of San Agustín de Callo that captivates its visitors comes from its centuries-old walls, the photos and memories that hang from the walls at the main room, where a large fireplace will warm up your body and soul.