Along some 217 miles (350 kilometers) of beaches, the coastline of Manabí province is marked by cliffs and stone slabs, river mouths and estuaries, islands and islets which compose the best coastal scenery in Ecuador.

Touring Manabí´s many beaches is our main interest on this trip, where it´s impossible not to enjoy the cuisine and to feel incredibly welcome by the warmth of its climate as well as of its people. 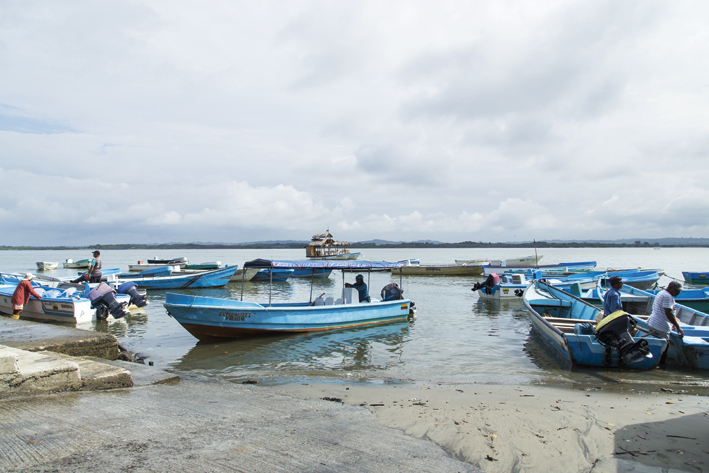 The regional government extended an invitation to tour the northern area of the province and they presented the key tourist attractions for the 2016 season. The trip itself is spectacular, as we drive close enough to the coast so we can appreciate the blue hues of the ocean on one side and the infinitely green hues of the lush vegetation, on the other. The ocean breeze flows in through the open windows of our vehicle and it seems to carry away our worries and cares, leaving behind only dusk with its purple and orange tones.

This time we visit Pedernales, Jama and San Vicente counties, all adjacent and with similar customs, but each one offering its unique charms. 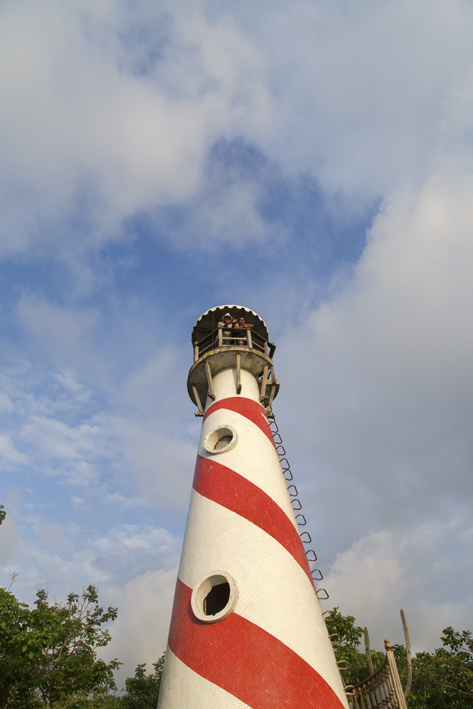 Its key attraction is the lengthy beaches with calm seas, decorated with palm trees and lush vegetation coming down to the shore. It´s the ideal spot for adventure tourism. The local cuisine favors shrimp, oysters and crabs.

Here is the location of the Jama-Coaque pre-Columbian civilization. Important pottery and other relics are now exhibited in museums. We can even feel somewhat “conquistadors” ourselves as we tramp along the beaches and notice memories of this ancient civilization on the shore or the nearby mountainsides. 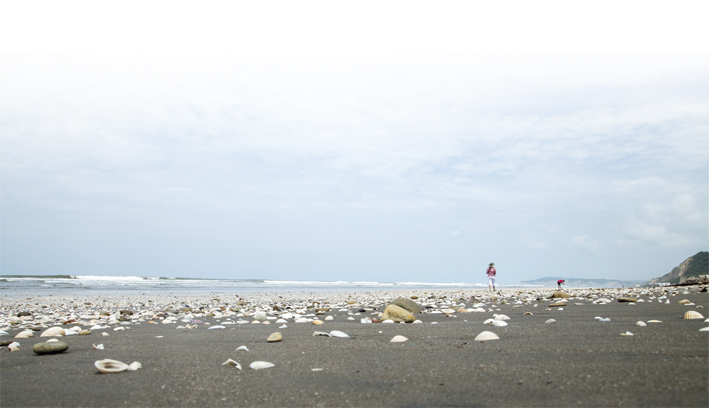 This county boasts that the Equatorial line passes through its land. In 1736 a French scientific mission, headed by Charles Marie de la Condamine, set in Punta Palmar the first marker in their quest to measure the length of one degree of latitude at the Equator, which would later determine the precise circumference of the Earth.

The land in Pedernales is quite uneven, with major hill tops that allow for panoramic views and hill sides with extensive forests. 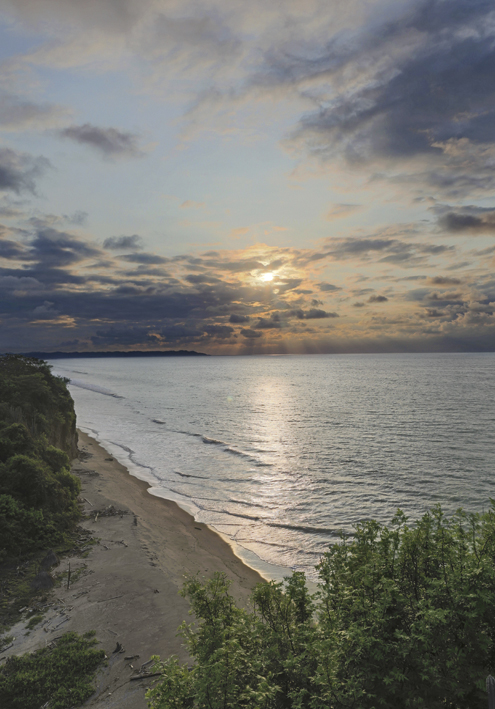 Here we found Punta Prieta Guest House. The hotel´s own views are majestic, but nothing like what can be seen after climbing up a nearby lighthouse, recommended only for tourists who don´t fear heights and seek additional adrenalin. The hotel is sited on the top of a hill of volcanic rock, some 80 feet (25 meters) above the beach. The rooms were designed with broad windows that seem to sail above the sea.

Alonso Ordóñez, the owner and also the man who built the hotel, tells us this project took him twenty two years. It was built with a blend of local timber and concrete, following the contour of the landscape and carefully protecting century old trees. The décor is simple and cozy with rustic designs. 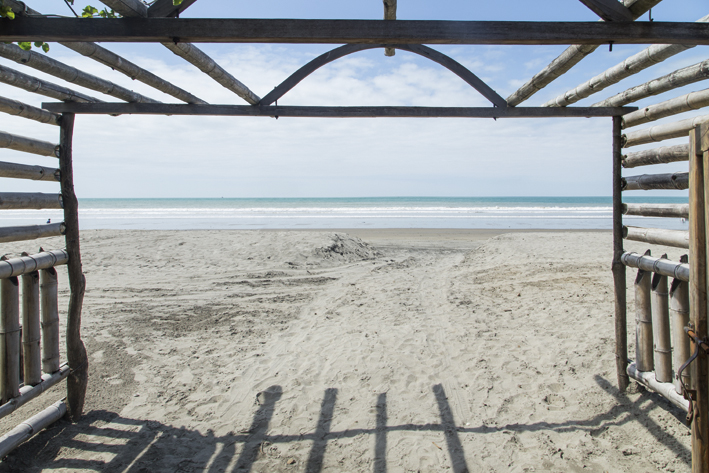 Punta Prieta´s cuisine is Lina Chila´s job. She´s the cook so, at her invitation, we sat down to savor her best meal, prawns with shrimp sauce followed by a delicious coconut caramel dessert.

Before our departure, we say goodbye to the landscape, where the environment provides a deep sea and a soft beach, perfect for long walks and long chats.

We were impressed by its seemingly never ending beaches. We arrived at noon and settled down in Bellavista beach, quite broad, peaceful, clean and safe. Nature´s decorations are scattered seashells, in every shape and color. The ocean is lukewarm, so nobody stays out of the water. After a dip, we walked the 3 mile length (5 kilometers) of the beach, followed by some fishermen´s dogs who decided to join our party. 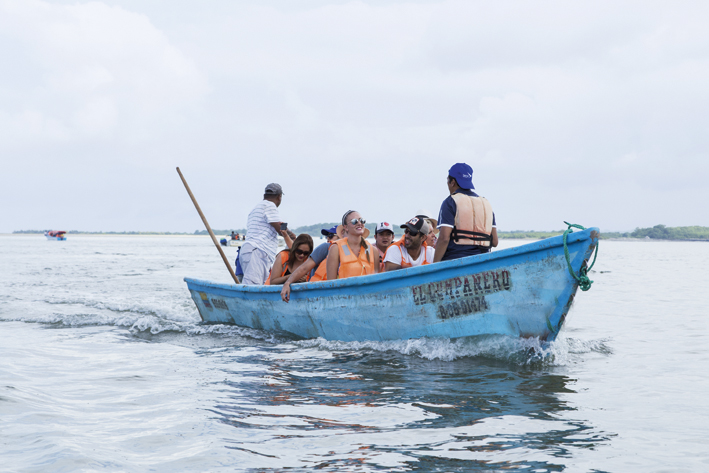 Bellavista is a fisherman´s beach. Some twenty people live by the seashore in small houses. Every day at dawn they go out into the ocean and return to sell their catch of prawns, sea bass and other fish. These fishermen feed the local families as well as the tourists who look forward to the meals that will be prepared with the day´s catch.

The Hostería Camare welcomed us, under the canopy of its fruit trees, with a refreshing cocktail and a folk dance by the Sol de Oro ensemble. To the tune of the song “Amorfino de la Magdalena”, the dancers in their green, red and orange dresses delight the patrons and also preserve the local traditions. 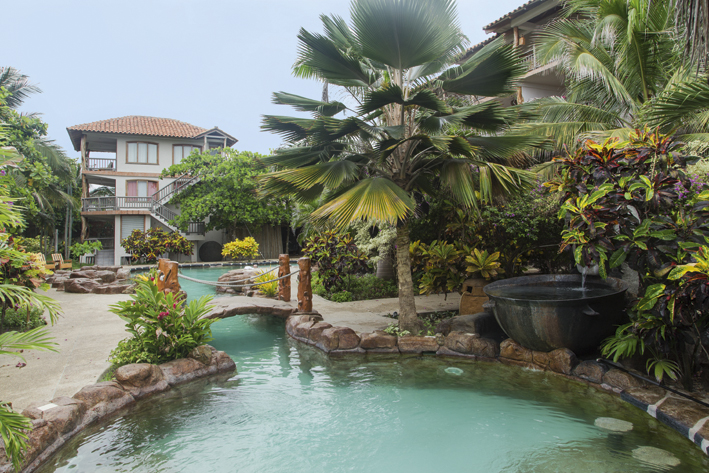 We lunched at the Samvara Eco-Lodge. The main course was its special prawns in wine sauce and we cooled down with fruit juices made with seasonal fruit. Local folk music was also available, this time with songs by Julio Jaramillo.

Jama has a magical air that envelops its beaches and tropical forests. We recommend this enchanting tour, so great that it was hard to leave. 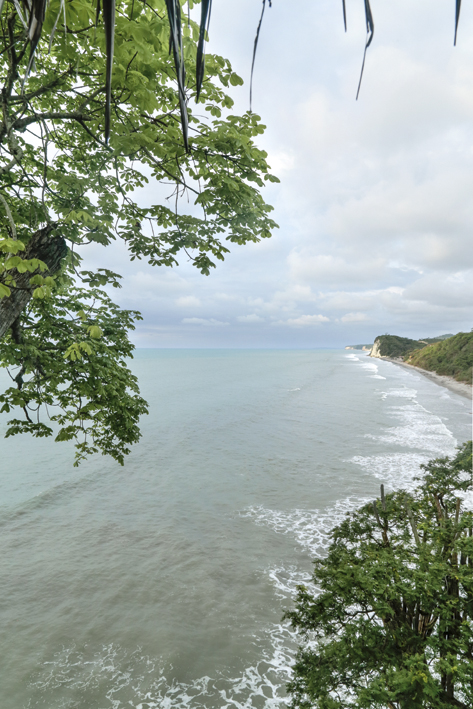 It´s the newest county in Manabí province. More than 25 miles (40 kilometers) of beaches are its main tourist feature, enhanced with calm seas and plenty of water sports. The facilities blend into the environment because they have been built with local materials. 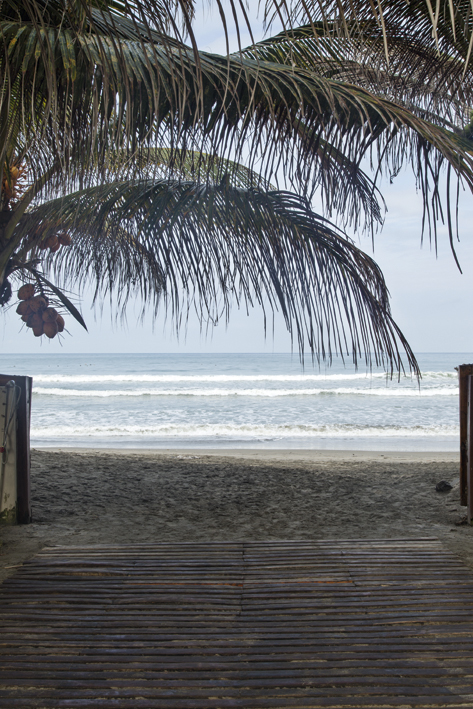 We spent the night in the township of Canoa, well known for its street parties and the merry atmosphere that ecuadorean and foreign visitors share. The Canoa Beach hotel welcomed us with music and traditional flavors. Our rooms had big terraces where we could sit and enjoy the cool evening sea breeze.

Early next morning we walked down the beach, breathing fresh morning air when the sea is calm and the light is still faint. Nevertheless, our tour has to move on, so we pack our bags and return to the coastal highway and its amazing views. 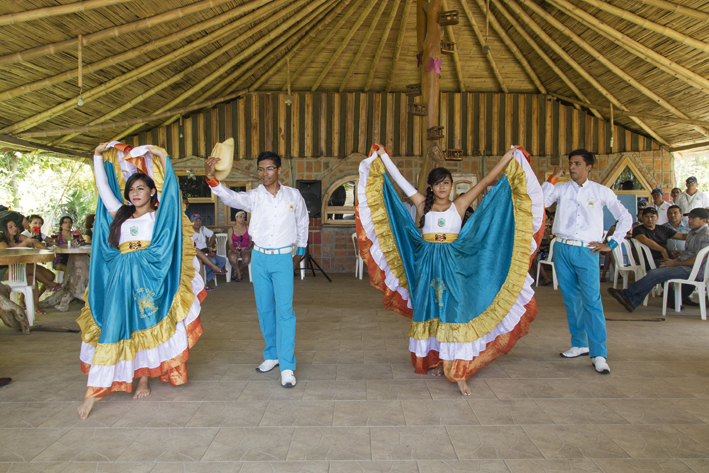 Our last stop was Briseño. A very relaxed beach with almost no pollution. Its 250 inhabitants are mostly fishermen and farmers. In this tranquil spot we sat down to gaze at the sea and also ate the best “ceviche” of our entire trip.

Jorge Risco, owner of Cangrejo Azul, a small restaurant on the seaside, belabored this delicacy that was the best way to end our tour.

Manabí was a pleasant surprise. We do hope to return soon so we can feel its warm sun and enjoy its colorful sights, a reminder that there is still much to see in Ecuador and that we are all responsible to conserve nature´s charms in the Ecuadorean beaches. 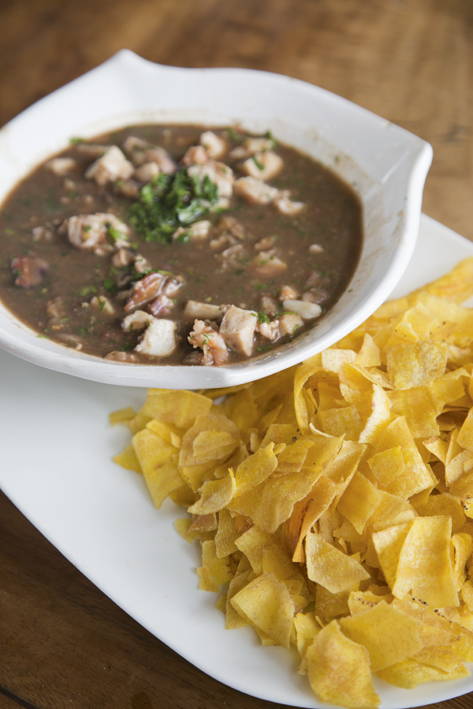 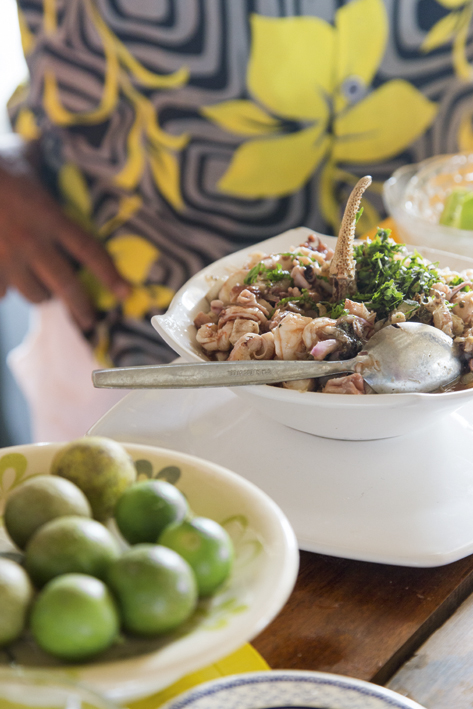 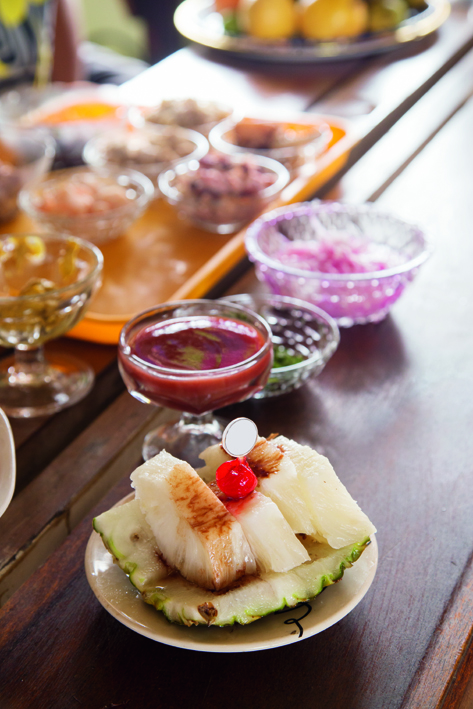