Eco tourism in the heart of Guayaquil

On October 2000 the Ramsar Convention, an international organization for the conservation of wetlands, named Santay an internationally important wetland because of the diversity of its wildlife and specifically because it’s the habitat of certain endangered species such as the river crocodile and the “machacón” duck. Ecuador’s Environment Ministry declared Santay an “Área Nacional de Recreación”, a national amusement area. The island has its own distinct habitat, a mix of wetlands, dry forests and grasslands. The variety of birds, reptiles and mammals is remarkable.

A few years ago, we had to stand on Guayaquil’s boardwalk, alongside the Guayas river, and tried to squint hard to see Santay island in the middle of this broad river. We wondered out loud how many people lived there and what their lives were like. Santay was close yet so far. Nowadays, getting to Santay is easy and it’s well worth visiting time and again, one of those places where you can escape from the hectic pace of a large city. 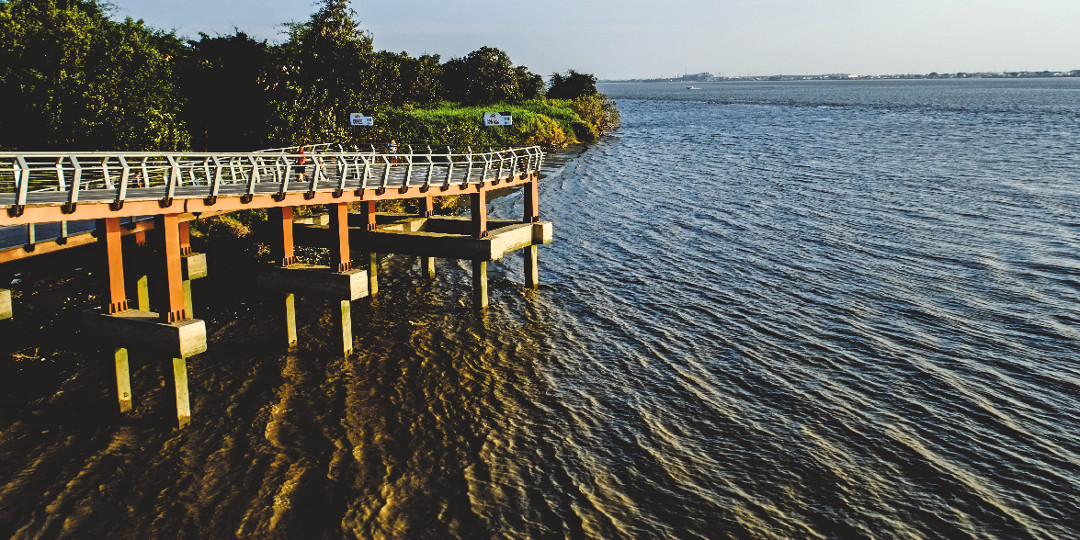 The island is connected by pedestrian bridges to Guayaquil, on one bank of the Guayas river, and to Durán, on the other. The length of the pedestrian bridge from Guayaquil to Santay is 2.755ft. Once on the island, there is a 1.2 mile path to an eco-village. The bridge on the other side, from Durán to Santay, is 2.200ft long and is linked to another 2.8 mile path on the island. On this path tourists enjoy a river view of Guayaquil, including Santa Ana hill.

Santay’s pedestrian bridges are open every day from 6 am to 9 pm, while access into the island is from 6 am to 5 pm. Visitors must leave the island no later than 6 pm. A curious feature is that Santay’s inhabitants are also its guides, natural hosts because of their intimate knowledge of the plant and animal species on the island.

Weekends are obviously more crowded, so we recommend visiting Santay during a weekday. Not only will rossing the pedestrian bridges be more comfortable, but you will be able to observe at your leisure the vegetation and the animal life on the island.

A short distance from the eco-village is the Crocodile Walk, home to eleven crocodiles

We went to Santay on a bike, starting from Durán, crossing the island and ending in Guayaquil, a 3.8 mile trip that took us about 45 minutes. Our first stop was a cafeteria in the eco-village. The menu is traditional ecuadorean fare with dishes like fried fish, rice and beans, creole chicken and “ceviche” (shrimp cocktail). A short distance from the eco-village is Santay’s best known attraction, the Crocodile Walk. This path leads to an overlook above two lagoons, home to eleven crocodiles. Hardcore eco-tourists can stay overnight for only 30 dollars in one of three cabins that sleep up to four persons each.

Santay is a conservation area that appears to exist to cleanse the contaminated air and to grant us the chance to jog or bike in the heart of Guayaquil.